In December Patently Apple posted a report titled ''Samsung Ready to launch a New Mid-Market Smartphone aimed at the Price Conscious in January." Right on cue it's being reported in South Korea today that the new smartphone will launch later this week for US $561 (599,500 won). KT is already taking pre-orders. Then in late next month Samsung will be launching their Galaxy S9 with enhanced Iris Scanning as they won't be able to copy Apple's Face ID this year.

But looking out a little longer term, Samsung is in the hunt for a magic bullet that will finally give them either an iPhone or iPad killing device.

The U.S. Patent & Trademark Office published a couple of Samsung's patent patents in the last 30 days that show them putting a lot of emphasis on scrollable devices. Even Apple has acknowledged that this could be a future form factor.

One of Samsung's latest design patents is a little more practical and yet could start an industry trend on several fronts. The first patent that we present to you below covers a design patent that shows that Samsung may be aiming for total waterproofing by eliminating speaker grills, ports and jack leaving the top and bottom of the device featureless. 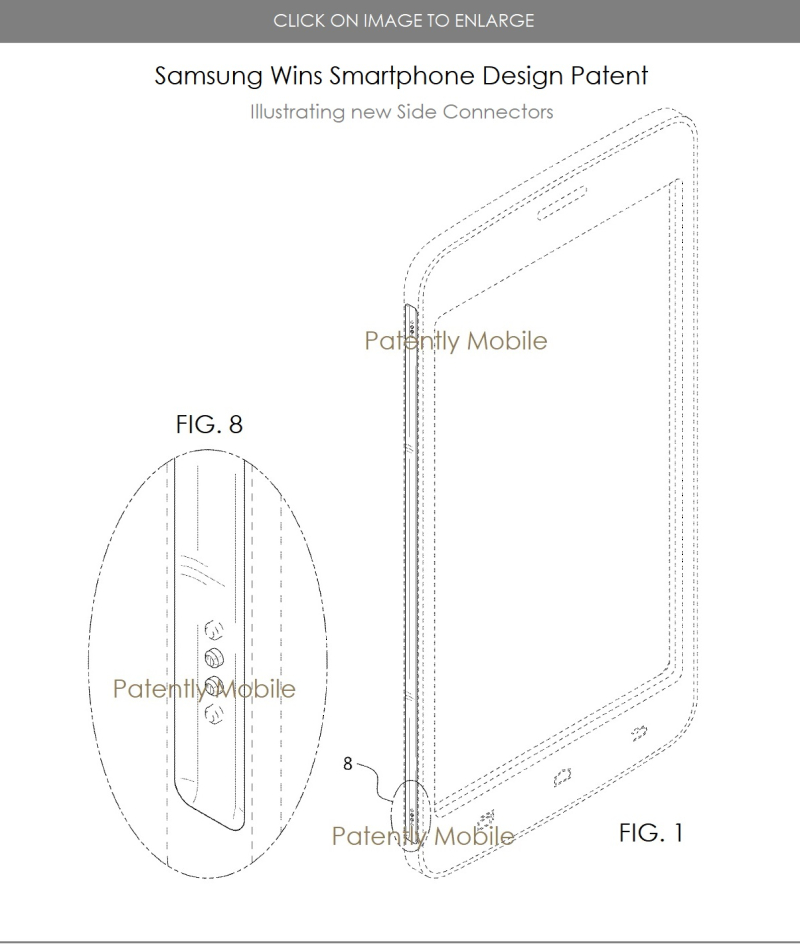 Back Side with Dual Lens Camera & Second Display

Samsung's design patent figures below illustrate the backside having a second full display, a dual lens camera and new MagSafe-like ports on the left side of the smartphone as noted in patent figure 1. Something like the Magnetic USB Type C/IOS/Android Adapter Charging Charger Data Cable as noted here. 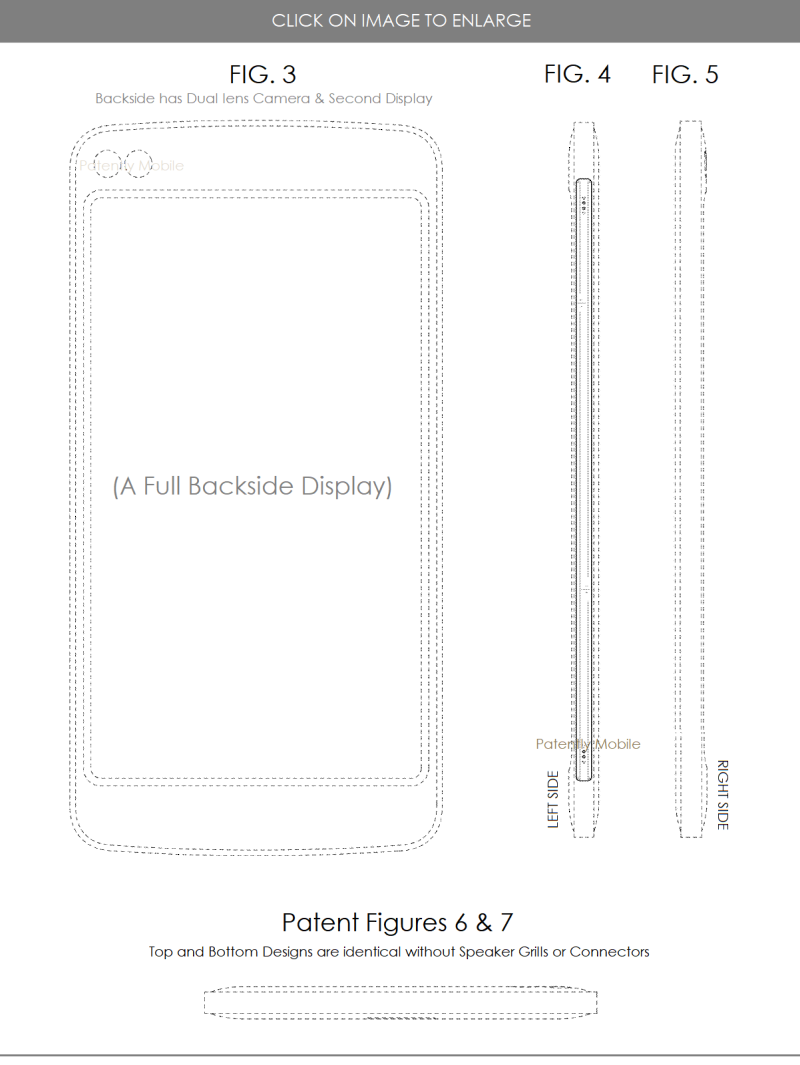 In 2017 Samsung continually filed for Scrollable smartphone (or tablet) patents month in and month out. In the last 30 days Samsung has filed at least two more as noted in the patent figures below. 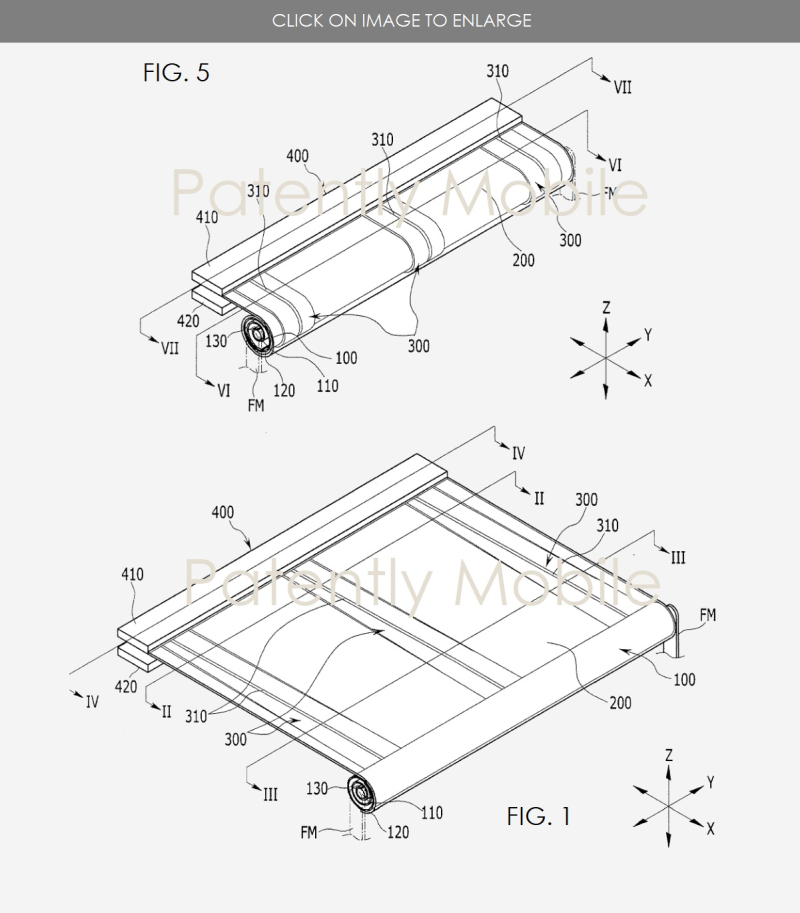 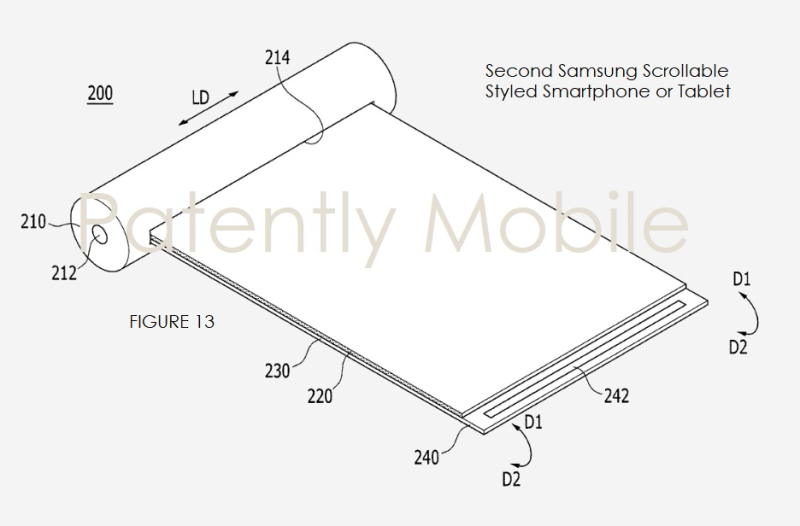 At this stage of the game, Samsung's scrollable patents have been focused more on the mechanics of the device rather than consumer end features that they're considering at this stage of development.

A single feature that is mentioned in their patent filing is using fingerprint biometrics. With 5G networks on the way, I'm sure that internet TV is one of the key markets that Samsung is aiming for and a scrollable display would be a very cool advantage.

Change is in the Air

As the current smartphone designs are becoming a bore for the most part, new form factors are bound to be explored by the major players in the hopes of striking a nerve with the public that could energize a new wave of smartphone sales and a larger piece of the market share pie.

To Samsung's credit they did pioneer the phablet that is the number one form factor in smartphones today. Apple and Samsung have both been exploring new designs at an accelerated pace of late.

With Samsung Electronics owning Samsung Display, they currently have the edge in both designs and a willingness to experiment over Apple. Yet it was the iPhone that was a killer mobile phone form factor back kin 2007 that revolutionized the 'smartphone' industry from top to bottom. Samsung introduced the phablet by simply making a larger display.

Will Samsung finally find their iPhone killer or will Apple be the one to reinvent the smartphone industry in the not too-distant future. On paper, Samsung is wining with more patents for smartphones and designs on record than Apple by a wide margin. Yet Apple is secretive and has the ability to mesmerize and energize consumers into buying the latest and greatest iPhones.

As we begin to see smartphones built with 7nm and 5nm ARM processors and components continue to miniaturize, we're bound to see new form factors emerge to once again reinvigorate market.

Who will win the race in delivering new smartphone form factors? Likely Samsung, as Apple has resigned to being a creative follower in many ways. Apple's CEO has made it abundantly clear in 2017 that Apple couldn't care less about being first at anything. And considering that they own the smartphone industry's profits and have for more than a decade, it's pretty hard to argue with success. Apple's iPhone evolution is working for them and as the saying goes: If it ain't broke, don't fix it.

And one more thing: with Apple being hit with 17 class action lawsuits in late December alone over purposely slowing iPhones and Samsung being hit with a recall because of fires, most consumers would be happier to see a next generation power supply technology extend smartphone life while being safer. Meaning that smartphone design isn't the only industry priority at the moment.