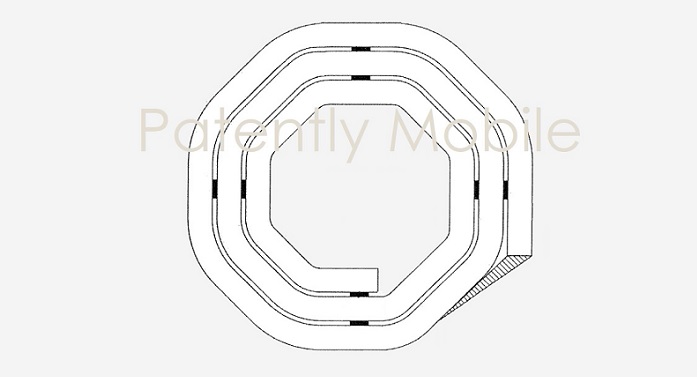 Samsung's mobile division CEO Koh Dong-jin held a small press conference at CES this week. On the question of their future foldable smartphone, Koh stated "We are preparing for an impeccable product that will dominate the market in the long run." While Patently Mobile has a special patent archive covering many potential future types of Samsung smartphones from foldable to scrollable and bendable, a steady stream of new patents from Samsung continue to be published by the U.S. Patent Office.

Being that a 'folding' smartphone is the one that Samsung's Mobile CEO was commenting on this week, we thought it the right time to publish both a recent patent win for a foldable smartphone and one that was just published yesterday.

The other patents covered in our report seem to favor mobile TV which is going to play a larger role in the market as 5G networks are made available sometime in 2019-2020 in the U.S. and other major markets around the world. This is likely why Apple is going all out to establish Apple Worldwide video with new content as a viable near future project so that they'll be ready for the 5G era. So on that market front, mobile devices supporting TV are going to be an important new service for both Samsung and Apple. We're also likely to see LG and Sony jump on this bandwagon as well. So the race is on to develop new kinds of display devices.

Samsung's granted patent published on Tuesday covers a lot of territory including a folding smartphone and tablet as noted in the patent figures below. In this particular version of a foldable phone design, the face display slightly wraps around to the back allowing it to be active while the phone is folded to show users they have new voice mail, email, text messages or updates. Another aspect to Samsung's granted patent relates to larger foldable devices such as a tablet of mobile smart TV which could be successful in the age of 5G networks. The icons illustrated on edges of the foldable device only show up when the device is folded. The icons could represent popular apps. If the device is used as a smart TV, then the icons could be replaced with popular channel buttons. 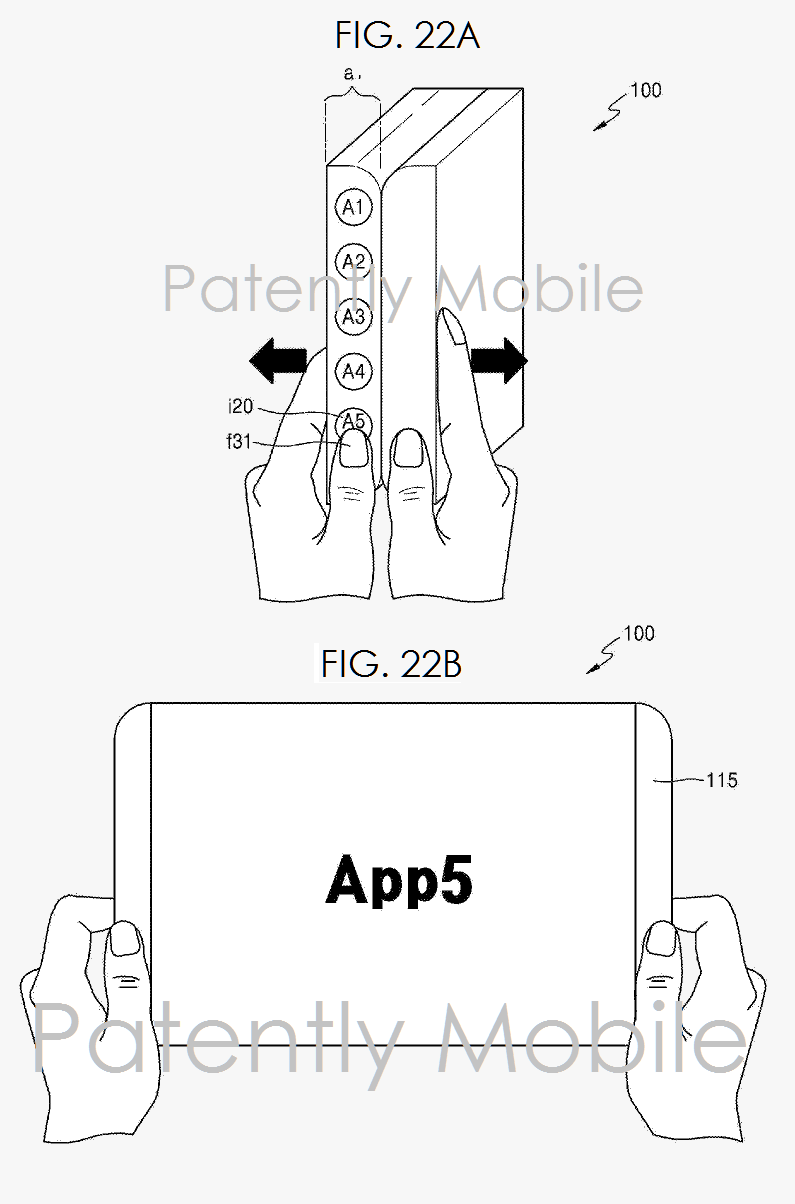 For more details and patent figures on this patent win, see our original report covering this invention as a patent application back in July 2016. 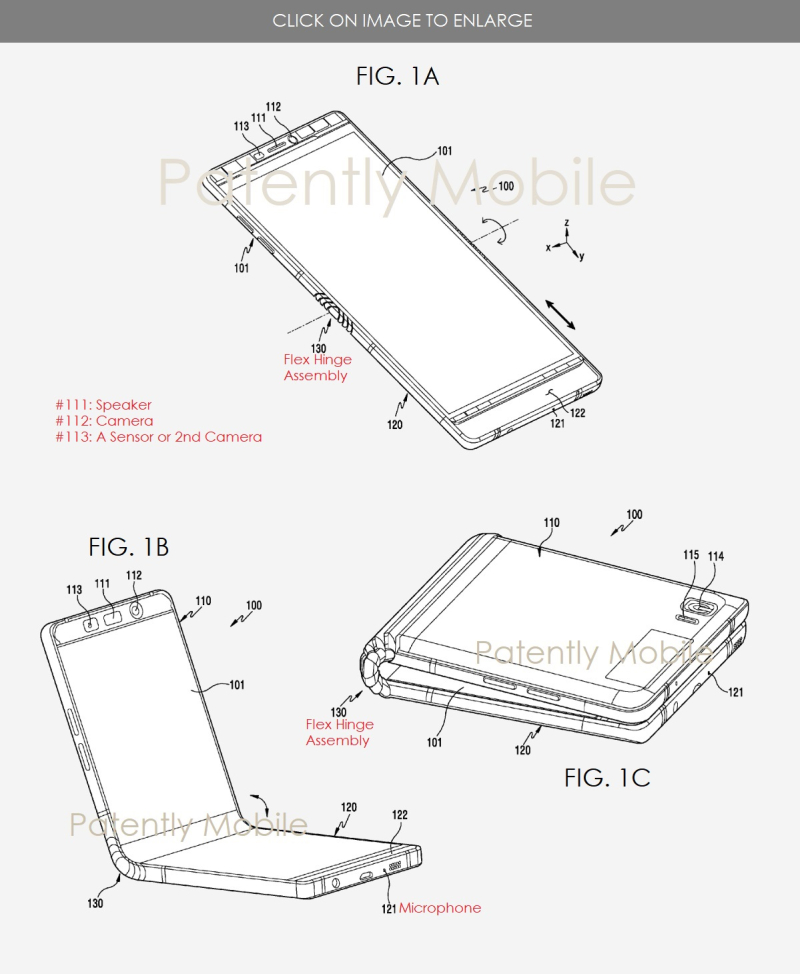 Samsung's second foldable smartphone is from a new patent application that was published on Thursday. It's a slightly different design in that it's closer to a tradition smartphone as noted in patent figures above.

In Samsung's patent FIGS 1A to FIG. 1C we're able to see a foldable (e.g., bendable) type electronic device #100 (foldable smartphone) which includes a first body #110 and a second body #120 which is foldable in a rotatable manner about a hinge assembly #130 in the first body.

The foldable smartphone may include a flexible touch screen that includes both a touch and force sensor. Components may include a speaker (#111), a camera (#112) and a sensor module (#113). The sensor module may include, for example, at least one of an illumination sensor (e.g., an optical sensor), a proximity sensor, an infrared sensor, and an ultrasonic sensor, or a second camera.

As shown in FIG. 1C, another camera device and a component may be disposed to a rear side of the first body. The component 115 may include at least one of a flash or heart rate measurement device.

Unlike many of Samsung's recent scrollable devices, the device presented in patent figures below is strictly rollable. Samsung notes that in general, a rollable display device is rolled to achieve a relatively small size when carried, and is unrolled to provide relatively large images to a user when used. 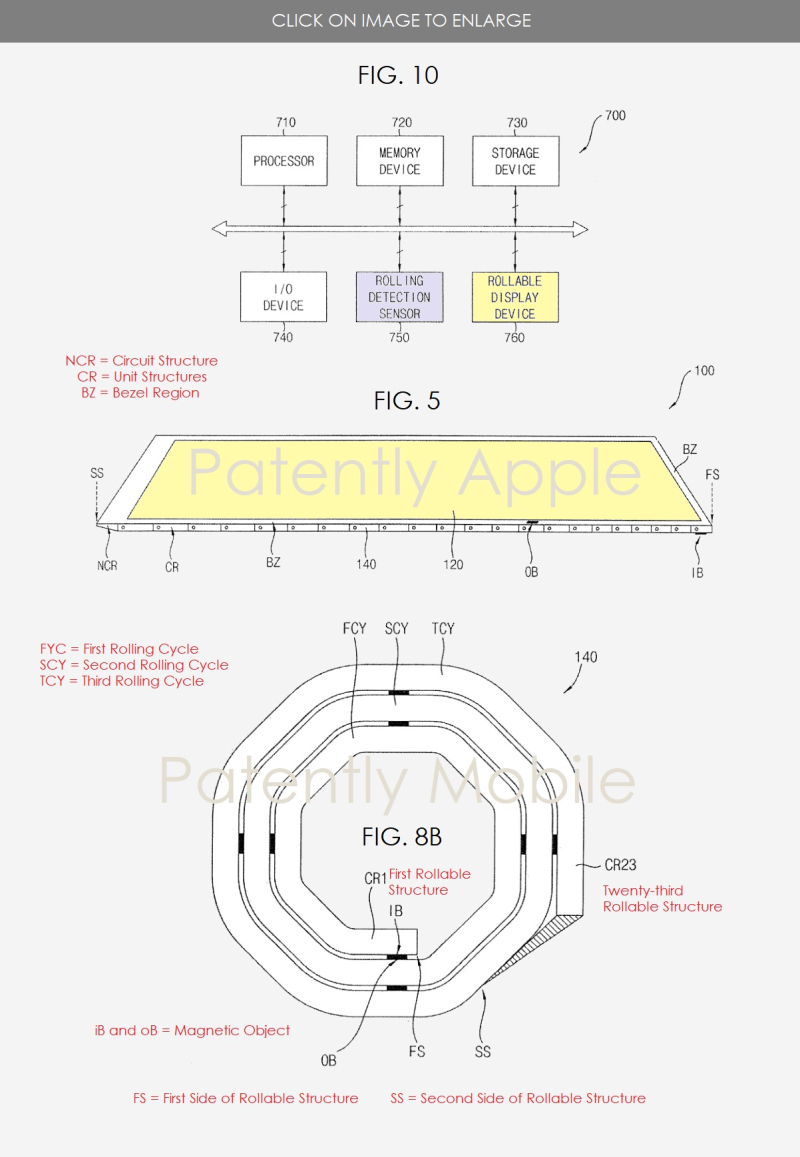 The key Samsung patent figure is that of FIG. 8B above where we're able to see a side view of the rolled up device using magnetic objects iB and oB attached to the bezel region BZ of the rollable structure #140. The magnets secure the rolled device from unravelling prematurely while protecting the flexible display.

Samsung notes in their patent application that the rollable device could be a smartphone, tablet, portable computer monitor or mobile TV.

Another granted patent this week reveals another category of device that allows the display to be stretched out to a fixed width by using a scrollable display. As the user grabs the grips located on the left side of the smartphone, as noted in the patent figure below, they're able to release the side so as to allow it to be scrolled out to increase the width of the smartphone to accommodate better viewing of television, other video content or even an application like a wide spreadsheet. Samsung's granted patent was only filed in the U.S. in July 2017, so this was a rather quick approval by the U.S. Patent and Trademark Office.

As flexible OLED display technology matures, new properties used to create the display will allow OEMs to design very creative devices like the ones noted above. Korea's Kolon Industries is a key player in developing technology to allow displays to fold without breaking or causing damage. They've said that they're working with five major OEM's and it was hinted that Apple was one of them. This was likely the technology that Samsung was waiting for in order to put their designs through testing to advance their folding smartphone.

At the end of the day, Samsung is trying to patent every conceivable device category possible for future devices. While Apple and other major OEMs are likewise patenting new device form factors, Samsung is by far the largest holder of patents regarding displays with new form factors.

If we go by what Samsung said earlier this week, then a foldable smartphone is likely what they plan on bring to market first to test the waters. Whether any of the other designs have a chance of winning in the market is unknown at this time.