Home Archives Contact Us Subscribe Twitter MeWe Facebook Patently Mobile
Qualcomm could be fined to the tune of €2 Billion for abusing its dominance by Forcing Apple to use their Chips Exclusively
Apple, Intel and Samsung to Benefit from the EU's Confirmed US$1.2 Billion Fine against Qualcomm 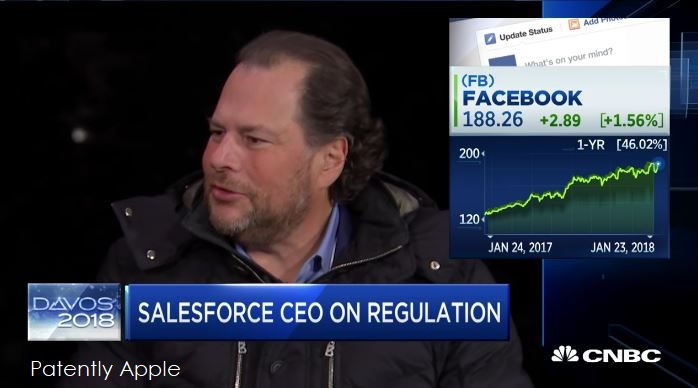 Last Friday Patently Apple posted a report titled "Apple's CEO Decides to Turn the Tables from the iPhone being an Addictive Force to it being Social Media." While talking with a group of students, Cook turned the tables on the idea that the iPhone was too addictive to social media being the culprit. Specifically Cook noted: "I don't have a kid, but I have a nephew that I put some boundaries on. There are some things that I won't allow; I don't want them on a social network."

In November, Sean Parker, the founding president of Facebook, said in an interview with Axios that he and other executives were guilty of creating a "social-validation feedback loop" to make Facebook psychologically addictive.

In recent months, Facebook has begun to acknowledge that some social media use can be harmful to mental health, a backflip for the Silicon Valley company which, until recently, rejected a growing body of research showing that Facebook use can spur negative feelings.

Yesterday, the CEO of Salesforce Marc Benioff said that Facebook's social network is addictive like cigarettes and should be regulated like big tobacco. Benioff told CBNC's Squawk Alley: "I think that you do it exactly the same way that you regulated the cigarette industry. Here's a product: Cigarettes. They're addictive. You know, they're not good for you...There's a lot of parallels." You could view that segment of the interview from Davos starting at around the 3:00 minute mark of the video below.

Benioff added: "I think that for sure, technology has addictive qualities that we have to address, and that product designers are working to make those products more addictive and we need to rein that back."

Benioff is the latest to voice criticism of Facebook and other tech companies for deploying tactics to hijack people's time and attention to the detriment of their well-being.