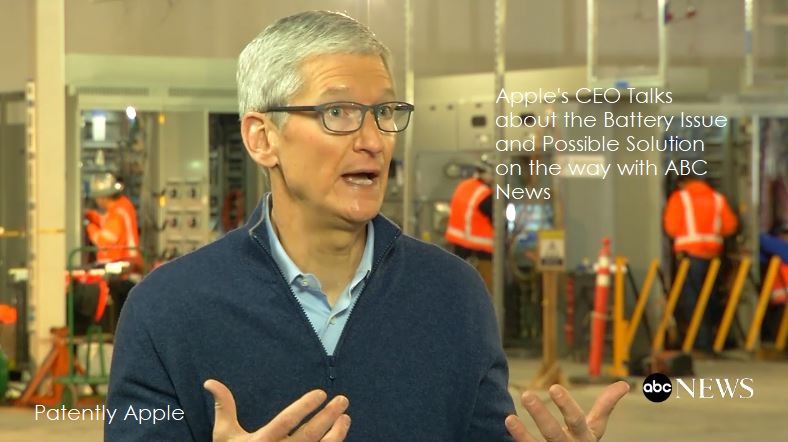 With over 40 Official Class Actions being filed against Apple to date over purposely slowing down iPhones, Apple's CEO Tim Cook spoke about the battery issue with ABC news last night amongst other things. In part, Cook blamed users for "not paying attention" to when Apple explained the battery policy update. To date no one has ever pointed out such an update that Cook is referring to and rather doubt that it was made clear or there wouldn't be any lawsuits.

The conversation about the battery issue begins around the 3 minute mark of the interview below. At the 5:10 mark of the video, Cook spoke about a future update to this problem/issue that is in the works that will give users the ability to "turn it off," referring to the battery throttling feature.

Other notes made in the interview: Last month, Apple reduced the price of out-of-warranty batteries for certain iPhones from $79 to $29 after it was scrutinized for allegedly slowing down processors in older phones.

When asked about the incident, Cook apologized to Apple users who believe that the company deliberately slowed the processors down in older models.

He hypothesized that when Apple released software updates to slow down older devices in older models to keep up with the new features, people may not have been "paying attention" when they explained what it was. "Maybe we weren't clear," he said. "We deeply apologize for anyone who thinks we have some other kind of motivation."

For Cook, the focus was on the 'user experience,' and the code was released to prevent the probability of an unexpected restart while using the phone.

In addition to the lowering the price of the batteries for certain phones, last month Apple will release software to allow people to see how healthy their batteries are, saying "all batteries age over time."

Cook said it was "rational'' to offer the less expensive battery option -- instead of free batteries -- considering that "most people kind of expect to get a [new] battery at some point in time."

That last statement was odd, as most people upgrade their iPhones and not their battery and I think Cook knows that very well with record sales of iPhones. If most got a battery at some point, iPhone sales would tank, period.

At the end of the day, Apple's "rational" won't stop the Class Actions from rolling in because users are convinced the slowdowns were intentional. The option to turn off throttling should have been made available from day one, not after the lawsuits began to pile up. There are more than twice the amount of Class Actions filed against Apple on this issue than there is against Intel over their Meltdown and Spectre security flaws.