Home Archives Contact Us Subscribe Twitter MeWe Facebook Patently Mobile
Class Action #22 against Apple was filed in San Jose California for Slowing iPhones by Misrepresentation and Deception
iPhone Fans in San Jose seem to be Really Angry at Apple, as Class Action #24 marks the 3rd Filing made from there on Friday

Class Action #23 against Apple was filed in San Jose for Deceptively Slowing iPhones, a Practice Apple Competitors don't engage in 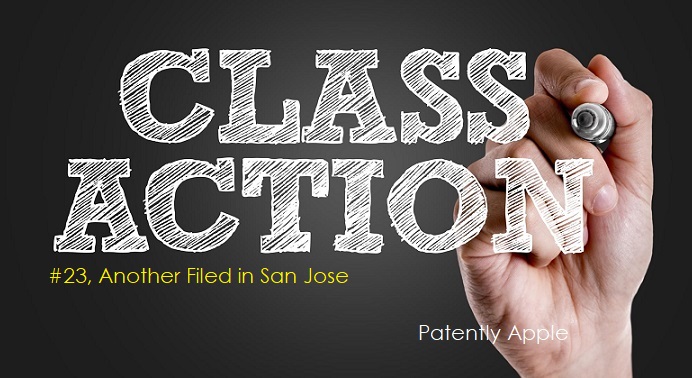 Alain Liebermann and Romeo James Alba have filed Class Action #23 against Apple for purposely slowing iPhones in San Jose. This is the second case from San Jose in today's batch of lawsuits. An additional four Class Action lawsuits are reportedly in-the-works in Canada, South Korea, Australia and France but are not official at this point in time.

Under the 'Nature of the Action' the plaintiffs state that "This is a class action relating to Apple's unlawful and deceptive practice of intentionally slowing down or "throttling" the performance of certain iPhone models, including the     iPhone 6, 6 Plus, 6s, 6s Plus, SE, 7, and 7 Plus models (the "Devices").

Since introducing the first iPhone in 2007, Apple has inspired a degree of brand loyalty among its customers that few companies have matched. As a result, when iPhone users find the performance of their iPhones has begun to decline so that the phone must be replaced, they tend to upgrade to a newer iPhone model.

Unfortunately for many of its customers, Apple has not shown them the same degree of loyalty. Instead, Apple has deceptively slowed the performance of the Devices through software updates, causing many owners to take the unnecessary and expensive step of upgrading their phones prematurely. Apple intentionally reduced the performance of the Devices while denying users material information that would have allowed consumers to restore Device performance while avoiding a costly upgrade.

Specifically, unbeknownst to Device users, updated versions of Apple's iOS operating system were designed to deliberately slow the processor ("CPU") speed of the Devices as their lithium-ion battery ages. This practice misleads users to believe that their Device is slow and operates poorly due to reduced processing performance and that the Device needs to be replaced, when, in reality, there may simply be a deficiency in battery power. As a result, Plaintiffs and many other Device owners have prematurely upgraded their Devices rather than taking the far less expensive step of replacing the phone's lithium-ion battery.

Notably, there is no evidence that any other smartphone manufacturers throttle their products through software updates. In fact, several of Apple's competitors have already affirmatively stated they do not perform this type of throttling on their older models of smartphones. [See report supporting this here.]

This action seeks redress on a class-wide basis for Defendant's deceptive business practices in throttling the Devices. Plaintiffs bring claims on behalf of themselves and on a class-wide basis against Defendant for violations of California's Unfair Competition Law and the Computer Fraud and Abuse, fraudulent concealment, breach of implied contract, unjust enrichment, and injunctive relief."

23: Class Action #23 against Apple was filed in San Jose for Deceptively Slowing iPhones, a Practice Apple Competitors don't engage in

22: Class Action #22 against Apple was filed in San Jose California for Slowing iPhones by Misrepresentation and Deception

21: Class Action #21 against Apple was filed in Brooklyn for Intentionally Degrading the iPhone's Performance

20: Class Action #22 against Apple was filed in San Jose California for Slowing iPhones by Misrepresentation and Deception

Please note that it's been reported that lawsuits against Apple on this issue are in-the-works in France, South Korea, Australia and Canada in 2018, but are not presently official and therefore cannot be a part of the official list of Class Actions noted above.