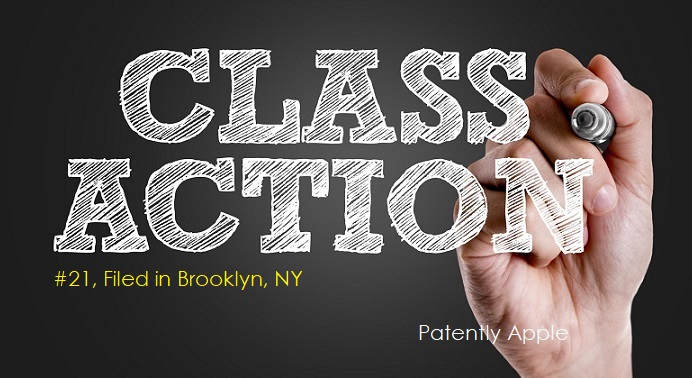 Marc Honigman has filed Class Action #21 against Apple for purposely slowing iPhones in the New York District Court (Brooklyn). An additional four Class Action lawsuits are reportedly in-the-works in Canada, South Korea, Australia and France but are not official at this point in time.

The followings excerpts are from Mr. Honigman's formal complaint before the court: "Apple has consistently represented that its iOS updates improve rather than hinder the performance and security of iPhone Devices. For example, Apple's website states: 'Keeping your software up to date is one of the most important things you can do to maintain your Apple product's security.' Thus, iPhone users are urged to update their devices to add vital security updates and bug fixes necessary for the iPhones to properly function. Users are essentially forced to make a 'choice' between leaving their personal data susceptible to hackers and identity thieves, or upgrade their iOS software which remedies serious security breaches. In essence, no reasonable consumer, including Plaintiff, would leave their iPhone vulnerable to security breaches by not upgrading to the new iOS version.

Plaintiff and Class members were unaware that Apple's iOS 10.2.1 and later updates were engineered to intentionally slow down the performance speed of iPhone Devices or that these updates otherwise had the effect of hindering the devices' functionality.

Apple's iOS download notifications and its statements on its website never disclosed to consumers that the slowdown and reduced functionality of older iPhone devices was a planned result of iOS updates. Nor did Apple inform consumers that the shutdown bug that impacted many iPhone Devices might be remedied by replacing the battery in affected devices and avoiding the download of new iOS versions. Battery replacement at the Apple store costs less than $100, whereas the cost to upgrade to a new iPhone can range between $200 to $1,000, depending on the model.

Nothing on Apple's website or in its iOS notifications informed consumers of the deleterious impact that iOS software may have on the devices.

Please note that it's been reported that lawsuits against Apple on this issue are in-the-works in France, South Korea, Australia and Canada in 2018, but are not presently official.