Home Archives Contact Us Subscribe Twitter Facebook Patently Mobile
Apple Announces that HomePod will be in Stores on February 9th
Déjà Vu? Another Sapphire Project goes wrong and a Chinese Company Sues Apple for Breach of Contract in California 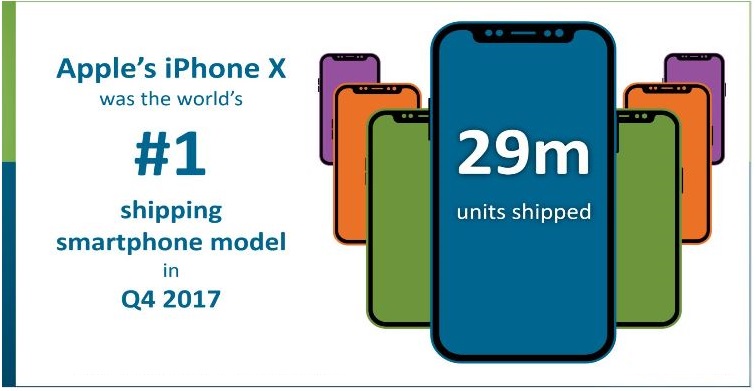 A new analytical report published today claims that Apple shipped 29 million iPhone Xs in Q4 2017. This made it the world's best-shipping smartphone model over the holiday season.

A new report by Canalys further noted that "Adoption was driven by upgrade demand in operator-centric markets, where Apple's installed base is high and customers can finance the cost of handsets over many months. Another notable highlight for the iPhone X is that of the 29 million shipped, 7 million were in China.

Ben Stanton, Analyst at Canalys stated that "The iPhone X performance is impressive for a device priced at US$999, but it is slightly below industry expectations."

Apple's iPhone SE, 6s, 7 and 8 models also shipped well in Q4. The older handsets are still popular with iPhone users looking for value for money. Canalys Analyst TuanAnh Nguyen stated that "Apple is looking at its best performance to date, all thanks to the massive changes it made to its portfolio in Q3. This strategy has hedged Apple's risk as it upgrades the iPhone, in both design and user experience.

While new technologies, such as Face ID and bezel-less displays, help to justify the US$999 price tag and maintain competitiveness. Having a larger portfolio allows Apple to meet its overall shipment targets, and protect its market leadership in the premium segment."

If the iPhone X numbers are true, then Apple gets to laugh at all the negative reports that have been written about the iPhone X being doomed. Is their bias in the media? Ha! Of course and it's getting as bad as CNN's Fake News.

Yesterday Patently Apple posted a report titled "For the month of November, Apple recorded its best ever iPhone sales in a single month in the USA," with Apple's iPhone X leading the way. It was a good barometer for how iPhone X was going to perform for December and the quarter in general.