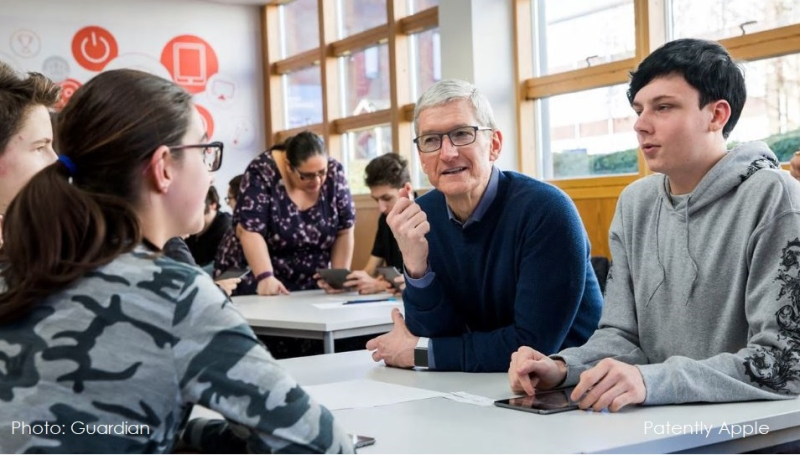 On January 8th Patently Apple posted a report titled "Big Apple Shareholders Sent Apple a Letter Saturday urging them to take Steps to Address Growing iPhone Addiction." While Apple has parental controls on macOS and iOS, Apple made it public quickly that they're going to be releasing even more controls for parents in a future software update. Now Apple's Tim Cook is trying to change the direction of that conversation and uniquely away from Apple.

Earlier today Patently Apple posted a report titled "70 Leading Colleges and Universities across Europe have Adopted Apple's 'Everyone Can Code' Initiative." The third photo in that report shows a male student who is now in the cover photo of a report by the Guardian, as noted above. Evidently Apple's story published today derived from somewhere in the UK.

While talking with a group of students, he turned the tables on the idea that the iPhone was too addictive to social media being the culprit. Specifically Cook noted: "I don't have a kid, but I have a nephew that I put some boundaries on. There are some things that I won't allow; I don't want them on a social network."

The only Language that Matters in the World, is Swift

Of course Cook was at one of the schools in London that have adopted Apple's 'Everyone Can Code' Initiative. The Guardian notes that "The one-year coding curriculum adopted by Harlow college, half an hour north of London, is intended to teach students computing skills through the use of a variety of games, lessons and interactive materials.

Every student is given an iPad loaded with coding apps and tools, and the teachers guide them through the concepts of coding. Pupils are able to see their progress and get feedback, finishing the year with two qualifications.

One student, Athena, 17, said: "In secondary school it was mainly about designing websites in bright colors, but this focuses on real coding and gaming."

Cook said: "I think if you had to make a choice, it's more important to learn coding than a foreign language. I know people who disagree with me on that. But coding is a global language; it's the way you can converse with 7 billion people."

Parlez vous Swift? Of course Cook's comments were a little self-serving and when I'm in France next time I'll try ordering a bottle of wine in Swift and see how that works out. Ha! – Not likely. For more on this, read the full Guardian report here.