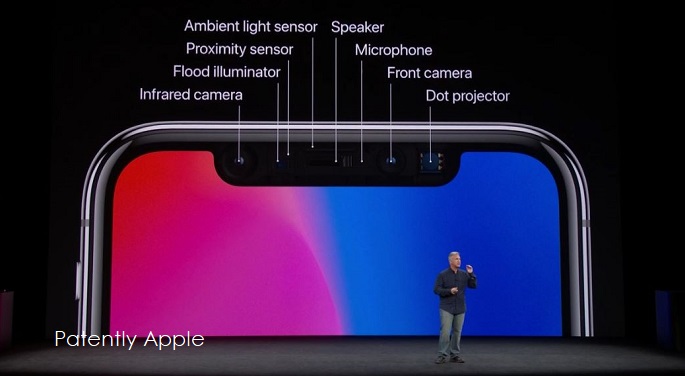 In November Patently Apple discovered an Apple patent in Taiwan covering near-infrared imaging devices. The patent noted that "Near-infrared (NIR) imaging devices capture light in the wavelength range of 800nm to 1300nm. Such devices are used, inter alia, for medical diagnosis, food inspection and night vision. NIR imaging devices have also attracted increasing interest for application in various consumer electronic technologies, such as pattern-based depth mapping." Today we know that Apple uses an infrared camera as part of their TrueDepth camera system for Face ID. It uses infrared (IR) light to illuminate a user's face while capturing the images, to work day or night, outside or indoors.

More specifically Apple's granted patent covers an optical system for operation at a target near-infrared (NIR) wavelength in imaging an object onto an image plane. The system includes the following optical elements, arranged in order from object side to image side: a first lens, including a first material having a first index of refraction at the target NIR wavelength and having a positive refractive power; a second lens including the first material and having a first meniscus shape; a third lens including the first material and having a second meniscus shape; and a fourth lens, including a second material having a second index of refraction at the target NIR wavelength that is lower than the first index of refraction. The fourth lens has front and rear surfaces of an aspheric form, with at least one inflection point in at least one of the surfaces, and with aspheric coefficients chosen so that rays reaching the rear surface from the object are not totally internally reflected within the fourth lens to impinge on the image plane. 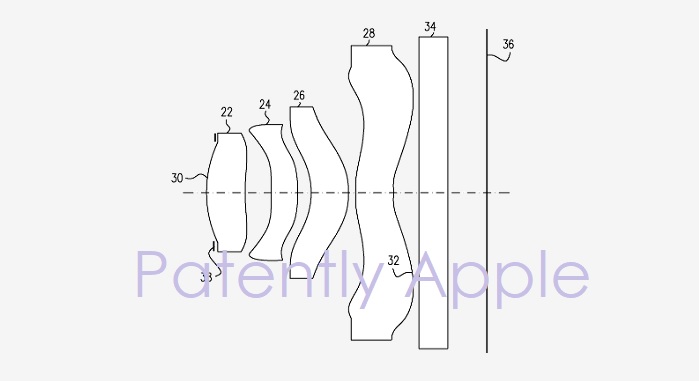 Apple's patent FIG. 1 is a schematic side view of an optical system

Apple's granted patent 9,869,847 was originally filed in Q1 2016 and published today by the US Patent and Trademark Office.