In June Patently Apple covered the 2017 Glassdoor 'Highest Rated CEO' list where Apple's CEO took quite the beating. Cook had been steadily climbing in the rankings until this year. In 2013, he placed 18th; in 2014, 18th; in 2015 he placed 10th1 and last year climbed right into the eighth position. But for 2017, Cook crashed to earth at #53, dropping 45 positions which is likely the largest drop on record with Glassdoor.

With Tim Cook's rating crashing so badly, it's really not much of a surprise that Glassdoor would also rate the company overall in a bad light. Then again technically, the rankings are supposedly driven by current employee ratings and reviews. So there's an obvious uptick in employee dissatisfaction.

The new '2018 Best Places to Work' rankings just published now list Apple at #84. You could check out some of the basic reviews of Apple here. 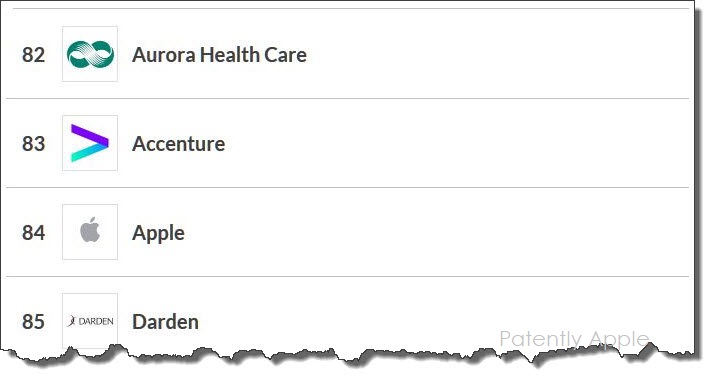 The odd thing is, the average rating shows employees ranking Apple 4 out of 5 with positive reviews. As you can see below, 80% would recommend Apple to a friend and 93% approve of CEO.

Google came in at #5 as noted in the Glassdoor graphic below.

The Number One company in the 2018 rankings was Facebook.