The First Apple Patent Regarding Autonomous Vehicle Navigation was published today by the U.S. Patent Office 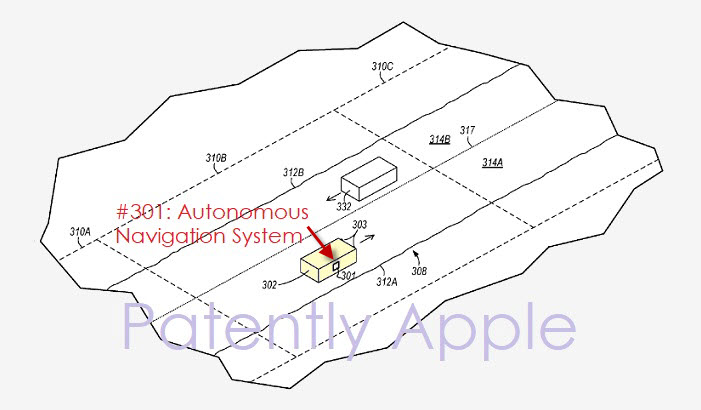 This is Apple's first patent on Autonomous vehicle technology and for that Patently Apple has opened a new archive category as this is likely the first of many patents to come on this subject.

In some cases, autonomous navigation is enabled via an autonomous navigation system which can process and respond to static features (e.g., roadway lanes, road signs, etc.) and dynamic features (present locations of other vehicles in a roadway on which the route extends, present environmental conditions, roadway obstructions, etc.) along a route in real-time as they are encountered, thereby replicating the real-time processing and driving capabilities of a human being. However, the processing and control capabilities required to simulate such processing and responsive capability can be impractical, if technically feasible, and the complexity and magnitude of computer systems required to be included in a vehicle to enable such real-time processing and responsiveness can present an unsuitably excessive investment in capital costs for each vehicle, thereby rendering the system impractical for usage on a wide scale.

In some cases, autonomous navigation is enabled by developing a detailed map of various routes, including data indicating various features of the road (e.g., road signs, intersections, etc.), specifying various driving rules relative to the various routes (e.g., proper speed limits, lane changing speeds, lane locations, variations of driving rules based on various climate conditions and times of day, etc. for a given portion of a given route), and providing the map to autonomous navigation systems of various vehicles to enable the vehicles to autonomously navigate the various routes using the map.

However, development of such a map can require extensive expenditures of time and effort, as developing sufficient data for an individual route can require dispatching a suite of sensors, which can be mounted in a dedicated sensor vehicle, to traverse a route and collect data regarding the various features included in the route, processing the collected data to develop a "map" of the route, determining appropriate driving rules for various portions of the route, and repeating the process for each of the individual routes included in the map. Such a process can require an excessive expenditure of time and effort to develop a map characterizing multiple routes, particularly when the multiple routes span over some or all of the roadways in a major city, region, nation, etc.

In addition, as roadways can change over time, e.g. due to road construction, accidents, weather, seasonal occurrences, etc. such a map can unexpectedly become obsolete and unusable for safe autonomous navigation of a route. Updating a map can require dispatching a sensor suite to re-traverse the route, which can require an expenditure of time. When such an expenditure is considered in view of the sheer volume of potential routes in a roadway network, particularly if multiple routes require updating simultaneously, updating a map of routes in a timely manner, such that vehicle users are not deprived of safe autonomous navigation capabilities, can be difficult. 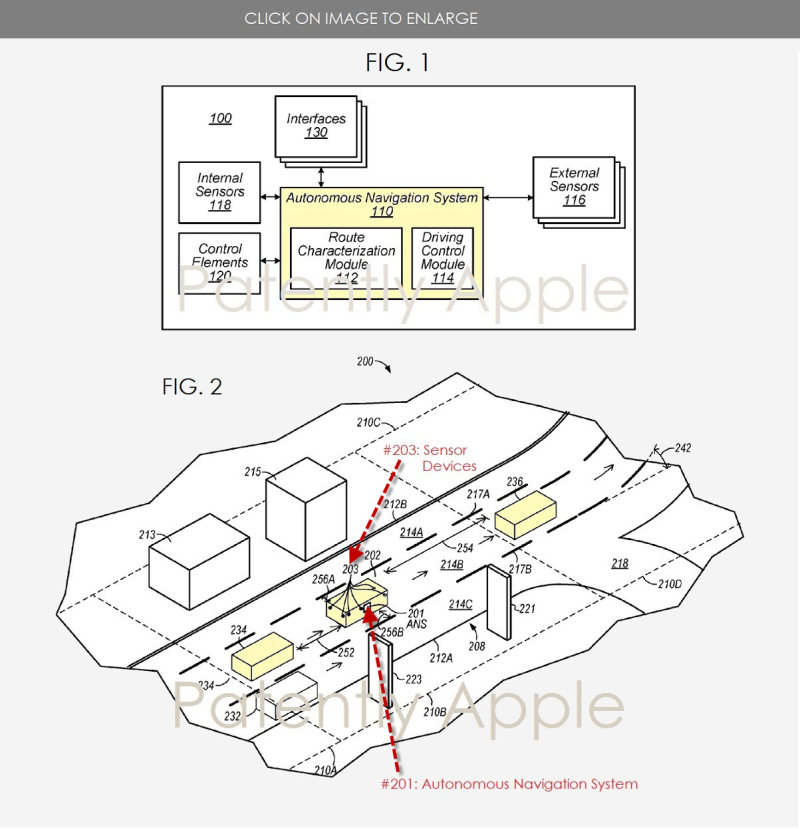 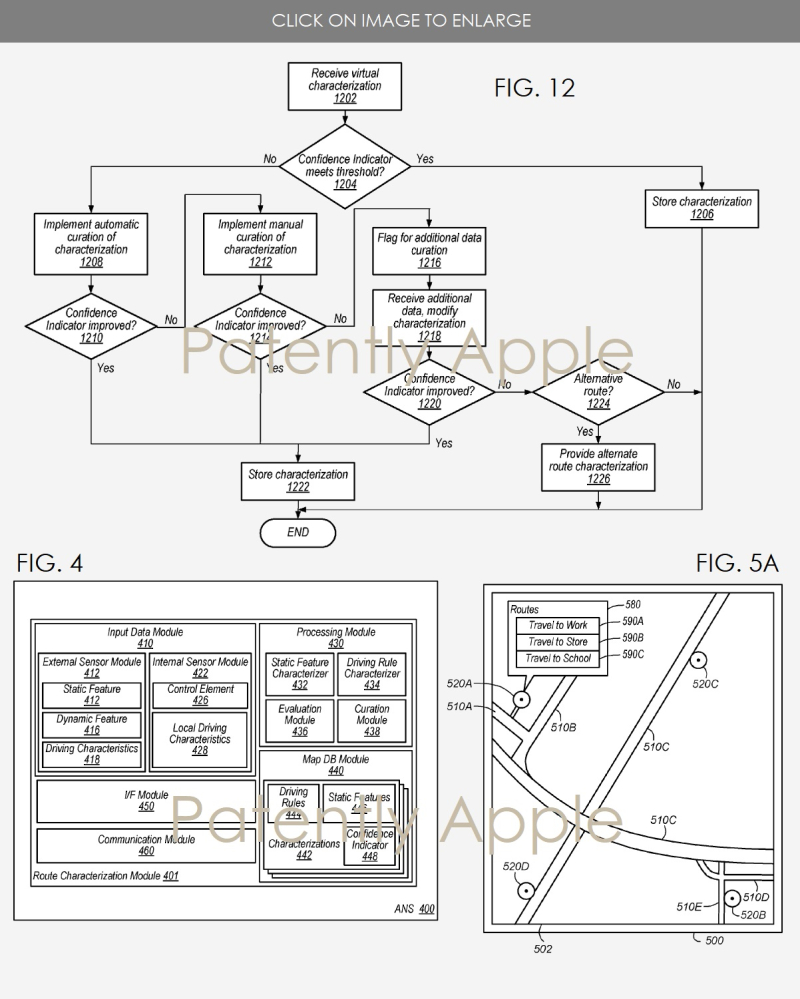 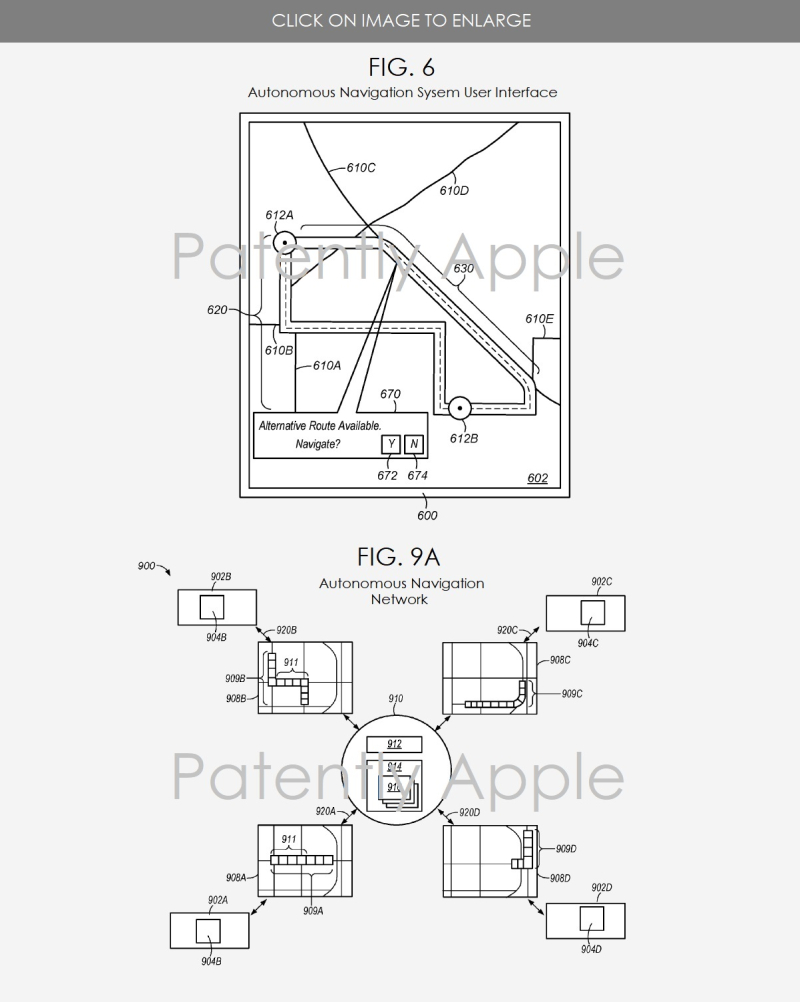 The following is covering patent FIG. 2 in more detail.

Apple's patent FIG. 2 illustrates an illustration of a vehicle #202, which includes an ANS #201 and a set of sensor devices #203, navigating through a region #200 which includes multiple roadway portions #210A-D of roadways #208, #218, according to some embodiments.

In some embodiments, the sensor devices can monitor various aspects of the external environment of region #200 to identify various static features associated with the roadway portion #210B of roadway which are external to the roadway #208 itself, including static landmarks #213, natural environmental elements #215, road inclines #242, road signs #221, #223, etc.