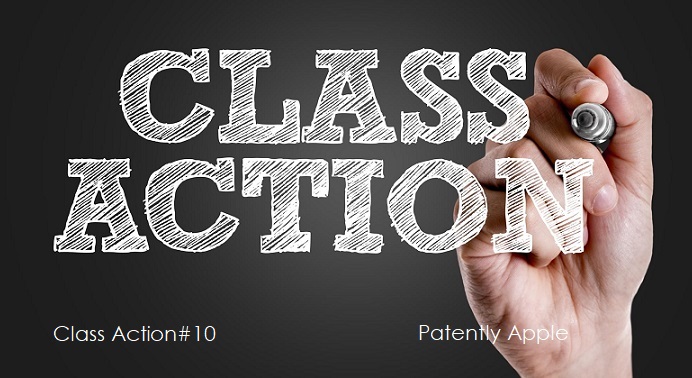 In this latest Class Action under 'Statement of Facts' the complaint before the court states the following:

'In early 2017 Apple iPhone owners of the iPhone 5, 6, 6s, and 6s Plus and 7 devices complained to Apple that their phones were spontaneously shutting down, even though they had sufficient battery. This usually occurred when the user was using your phone for something that required a burst of power — like in the middle of a game, or when downloading an app. In order to fix this bug, Apple introduced an update to its operating system software, iOS 10.2.1. This update fixed the shutdown issue in some cases but also slowed those iPhones down significantly causing Plaintiffs and members of the proposed class and sub-classes to experience issues such as delays in typing in messages and the lag in the loading of emails to name just a few.

In a Reddit post, in and around the second week in December, an iPhone user suggested that the iPhone battery might be to blame for the slowness problems. He stated the following:

'My iPhone 6S has been very slow these past few weeks, and even after updating multiple times, it was still slow. Couldn't figure out why, but just thought that iOS 11 was still awful to me. Then I used my brother's iPhone 6 Plus and his was... faster than mine? This is when I knew something was wrong. So, I did some research, and decided to replace my battery. Wear level was somewhere around 20% on my old battery. I did a Geekbench score, and found I was getting 1466 Single and 2512 Multi. This did not change whether I had low power mode on or off. After changing my battery, I did another test to check if it was just a placebo. Nope. 2526 Single and 4456 Multi. From what I can tell, Apple slows down phones when their battery gets too low, so you can still have a full days charge. This also means your phone might be very slow for no discernible reason. Check your Geekbench scores and see what you get if your phone is still slow!'

Following this Reddit post, John Poole, founder of Primate Labs and Geekbench developer, analyzed data of approximately 100,000 phones with different iOS versions. He looked at the versions before Apple fixed the bug and at versions after Apple fixed the bug and discovered that the phone processors slowed down after the system update and that the problem was widespread and 'likely to get worse as phones (and their batteries) continue to age.'

It took a viral Reddit post and an independent investigation by Poole for Apple to finally admit that Apple had intentionally slowed the performance of older iPhones stating the following on December 20, 2017:

'Our goal is to deliver the best experience for customers, which includes overall performance and prolonging the life of their devices. Lithium-ion batteries become less capable of supplying peak current demands when in cold conditions, have a low battery charge or as they age over time, which can result in the device unexpectedly shutting down to protect its electronic components.

Last year we released a feature for iPhone 6, iPhone 6s and iPhone SE to smooth out the instantaneous peaks only when needed to prevent the device from unexpectedly shutting down during these conditions. We've now extended that feature to iPhone 7 with iOS 11.2, and plan to add support for other products in the future.'

In other words, Apple slowed down the processors in order to avoid overloading the batteries. While Apple's battery explanation may be legitimate, Apple was anything but forthcoming about the slower speeds until December 20, 2017 and failed to disclose that this diminished performance could be remedied by replacing the battery in older iPhone models.

Apple purposefully concealed, fraudulently omitted and/or failed to disclose the fact that a battery replacement would improve the performance of older iPhones to require consumers to purchase newer iPhone models.

Had Plaintiffs been informed by Apple that a simple battery replacement would have improved the performance of their iPhones, Plaintiffs would have chosen to replace their batteries which was clearly a more cost effective method rather than upgrading to a new iPhone that was extremely costly.

In addition, Apple has failed now and in the past to give any explanation as to why their older iPhones become a lot more sluggish after a new iPhone model comes out. Apple's admission's was evidence of Apple's practice to get iPhone users to upgrade to a new phone.

The Five Counts in this Class Action