Just in Time for Christmas, Apple and CEO got the Tax Break they've been demanding for Years

On December 20, Patently Apple posted a report titled "The Republican Tax Overhaul that Passed today will allow Apple to bring back their Massive Cash Pile to the U.S." Today CNN has added some color to this story by noting that "For years, Apple CEO Tim Cook has called on Washington to make it less costly for his company to bring back the billions of dollars it holds overseas. Just in time for Christmas, Cook finally got his wish.

At a conference in February, Apple CFO Luca Maestri said a tax cut on repatriated cash would give Apple "additional flexibility around our capital return activities."

When asked about repatriation on the earnings call in January, Cook stayed vague, but left open the possibility of putting it toward acquisitions.

"What we would do with it, let's wait and see exactly what it is," Cook said, "But as I said before, we are always looking at acquisitions. We acquired 15 to 20 companies per year for the last four years." 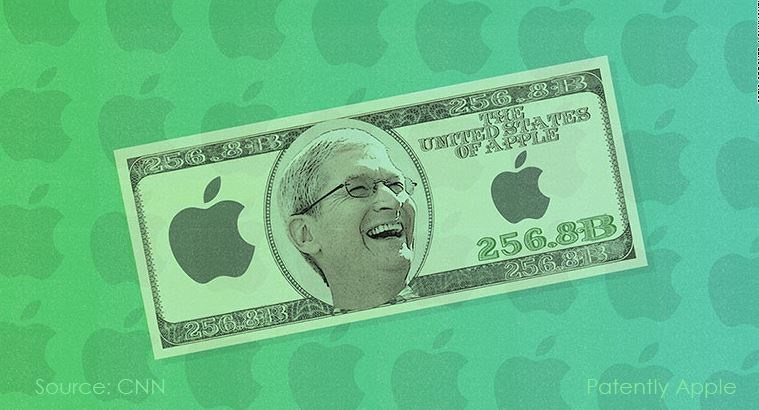 As part of the tax bill signed last week by President Trump, corporations like Apple will enjoy a repatriation tax rate of 15.5% for returning money to the U.S. from their overseas cash piles.

The new rate is higher than the "single digits" amount Cook once asked Congress for in 2013, but it is nonetheless significantly below the previous repatriation tax rate of 35%.

Now Apple and Cook face a put up or shut up moment. Will the world's most valuable company continue to rely on the tax havens for which it has been criticized, or make good on returning the money to its home country? And if it does bring it back, who will really benefit?

On an earnings call days after President Trump's inauguration, Cook said any tax reform package that encouraged repatriation would be "very good for the country and good for Apple."

Apple is by far the top cash hoarder. At the end of the most recent quarter, Apple had $268.9 billion in cash and marketable securities, more than $250 billion of which was held outside the United States. For more on this read the full report here.