In the Blink of an Eye, Apple's Admission of Slowing Batteries on Older iPhones turns into a Class Action Lawsuit 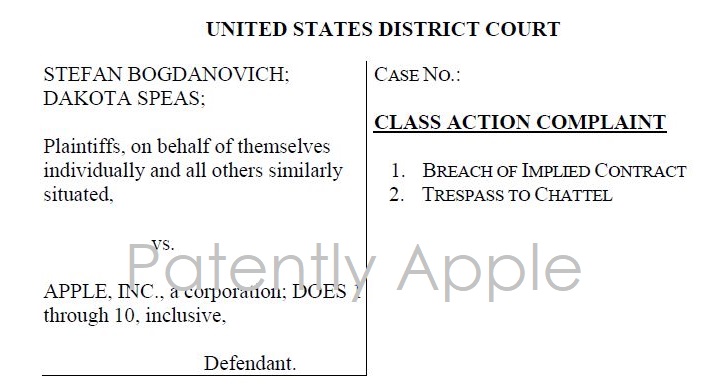 On Wednesday, December 20, Patently Apple posted a report titled "Apple slows some older iPhones because of Flagging Batteries." Later that day Business Insider couldn't resist in pushing the conspiracy side of the story by stating that "Apple on Wednesday admitted it had been secretly throttling the performance of older iPhones. The admission outraged even some of the company's biggest fans, and that customers have good reason to be distrustful of the company and to suspect its motives." There's nothing like a good conspiracy theory to get the Android wolves howling. Then yesterday CNN's byline on this story read: "Yes, Apple is slowing your old iPhone. But it's not a conspiracy." Welcome to the World Wild Web of multi-level contradictions.

When a story is this hot, you know what's coming around the corner: a class action lawsuit with greedy lawyers in the wings.

On cue, a lawsuit was filed yesterday in central California by Colin M. Jones from the Wilshire Law Firm on behalf of Stefan Bogdanovich and Dakota Speas for Breach of Implied Contract and Trespass to Chattel.

Nature of the Lawsuit

Plaintiffs and Class Members have used Apple iPhones for a number of years.

For further details of the charges against Apple, review the full lawsuit filing below.

The Chicago Sun Times reported on a second class action being filed late yesterday. The Times notes that " A day after Apple acknowledged that their software updates slow down older iPhone models, five customers have filed a federal lawsuit in Chicago against the tech giant for what they’re calling 'deceptive, immoral and unethical' practices that violate consumer protection laws.

The suit was filed Thursday by two Illinoisans along with Ohio, Indiana and North Carolina residents, who had a range of models from the iPhone 5 to the iPhone 7.