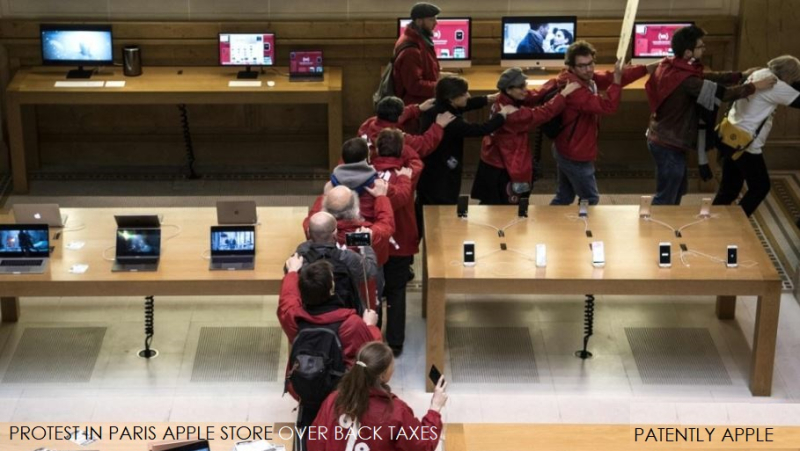 In late October Patently Apple posted a report titled "Apple's CEO didn't push back when France's President Read him the Riot Act on Taxes, and here's why." The report noted that Paris needed unanimity to push through any new tax plan that would affect Apple and that Ireland and Luxembourg weren't on board with the tax plan set out by the French President. There was news that EU was so furious about this that they stated that they would change the rules it in order to put the new tax plan into affect. When you don't like the rules, change them. That's the ethical backbone of the current EU rulers.

To make it clear to Apple's CEO that French President Emmanuel Macron will force Apple to comply with his new tax plan, he had the members from ATTAC, unofficially of course, invade Apple stores throughout France, including the expansive two-level store near the Paris Opera for several hours Saturday – leaving only after they were assured of a meeting with management.

Attac spokeswoman Aurelie Trouve stated that "One hundred Attac activists occupied the Apple store" to demand the company "pay its fair share of taxes in the country in which it really operates."

Members standing on the second-level balcony held a banner reading 'We will stop when Apple pays,' while others held signs that read 'Pay your taxes.' 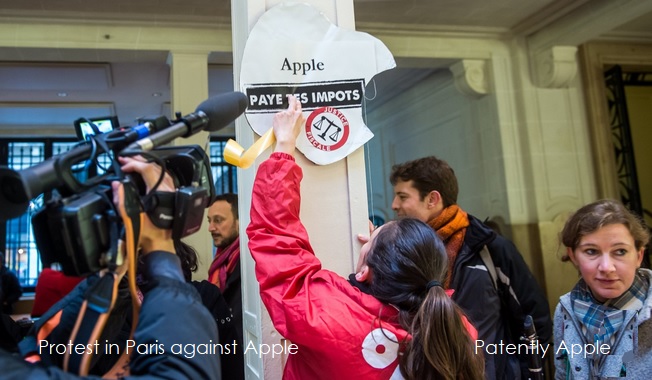 'We received a formal commitment from an Apple manager that we would be granted a meeting with national leadership within 15 days." Trouve said.

"If this meeting does not take place, we will come back before Christmas".

The group held about 30 demonstrations across France, including at an Apple store in the southern city of Marseille. 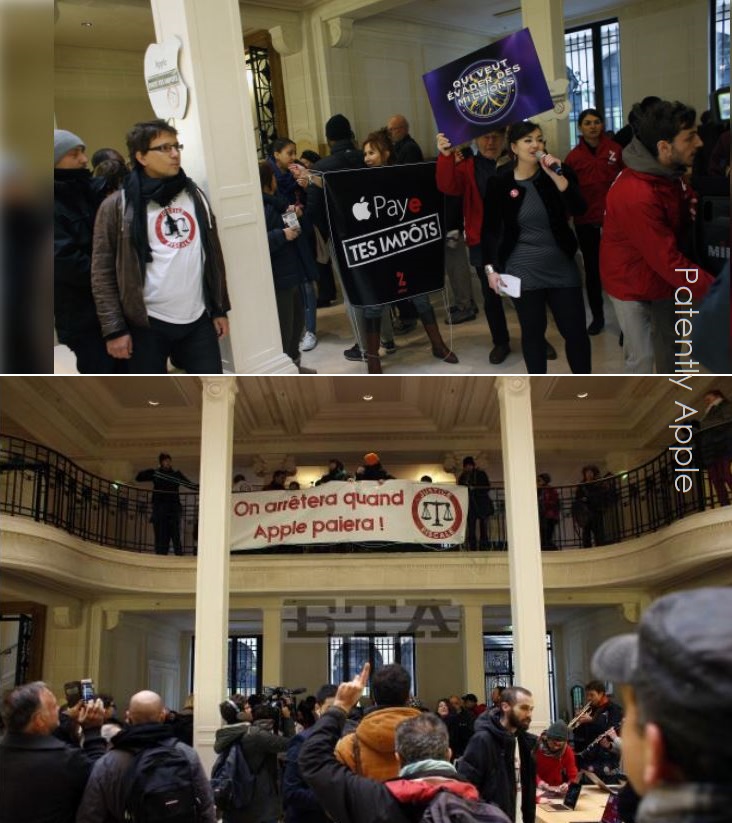 In August 2016, European authorities estimated that the company behind the iPhone owed US$14.5 billion in back taxes after it negotiated highly favourable tax arrangements with the Irish government.

Revelations last month from the 'Paradise Papers' shed light on Apple's tax avoidance strategy, which shifted tens of billion of dollars in profits from one fiscal haven to another.

Although the report was quick to mention the Paradise Papers to hype up the protest, it should be noted that Apple responded to that news the very next day denying any shady tax avoidance and made it clear that it pays every dollar it owes in every country around the world.

The report lastly noted that "Attac also protested against the company last month on the day Apple released its iPhone X globally, dumping a load of freshly picked apples as demonstrators carried signs saying 'Apple, pay your taxes' in the southern city of Aix-en-Provence."

According to one of our reports posted in October, Apple actually gained ground for iOS in France in Q3, so the Attac protests thus far have had absolutely no affect on Apple's iPhones sales. Apple fans, in any country, are fiercely loyal to the company and their beloved iPhones and it'll take a lot more than a handful of loud protests to make any difference on the tax issue.

For the record, ATTAC is an international organization involved in the alter-globalization movement. They oppose neo-liberal globalization and develop social, ecological, and democratic alternatives so as to guarantee fundamental rights for all. You could read more about them here.