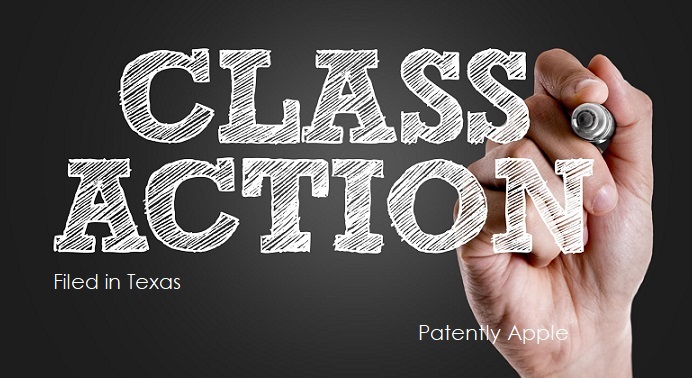 Most of the Class Action lawsuits filed against Apple thus far have stemmed California or New York. Today the first Class Action lawsuit was filed in Chicago and now the first lawsuit from Texas by Mark Miller, Chris Spearman and Craig Stanford. The group claims that Apple Intentionally Designed Software Updates to Slowdown iPhones.

Late this afternoon Apple posted a Message on their Home Page titled "A Message to Our Customers about iPhone Batteries and Performance." This is unlikely to stop the flow of Class Action lawsuits that are still streaming in. Earlier Today Patently Apple posted a report on a lawsuit filed in France and others from South Korea will be filed over the next two months.

The Class action filed by Mark Miller, Chris Spearman and Craig Stanford begins with the 'Nature of the Action' as follows in full:

"Apple promised that its recent iOS 10 and iOS 11 software updates to the iPhone 6 and iPhone 7 models would improve those devices' performance and it strongly encouraged its customers to accept those updates. But Apple didn't tell its customers that it had intentionally designed those software updates to slow the devices' processing speed to correct a battery defect. Apple then happily took its customers' money when the customers, dissatisfied with their now-slower devices, purchased new and more expensive iPhones. Apple came clean only this month under public pressure, admitting its software updates slowed processor speed. Now Plaintiffs and Class Members must either purchase new phones for hundreds, if not thousands, of dollars or continue to struggle with their slowed devices.