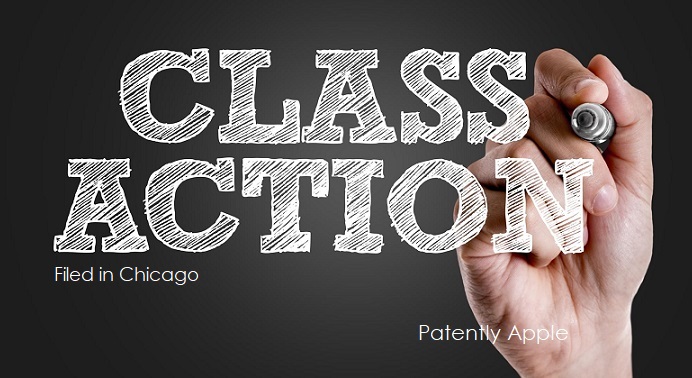 Even though Apple has just posted "A Message to Our Customers about iPhone Batteries and Performance," this is unlikely to stop the flow of Class Action lawsuits that are still streaming in. Earlier Today Patently Apple posted a report on a lawsuit filed in France and others from South Korea will be filed over the next two months.

The Class action filed by Sean Neilan begins with the Nature of the Action as follows in full:

The slowness is tied, at least in part, to diminishing battery condition, which is a function of the iPhone's age and use, the quality of design and manufacturing, and external conditions such as temperature. As Apple is aware, consumers do not ordinarily associate diminishing battery condition with slower processing speeds. And iPhone users do not address the real issue by replacing the battery, a solution that Apple intentionally obscures and deters. Instead, they purchase the new model iPhone that seemingly runs a lot faster and smoother––that is, until the battery's condition triggers the software to throttle the phone again. Apple deprived owners of the affected iPhones of the performance to which they are entitled.

Plaintiff brings this class action on behalf of buyers of Affected iPhones, and alleges claims for Apple's violation of Illinois' and others states' consumer protection laws and prohibitions on unfair and deceptive business practices, trespass to chattels, breach of the covenant of good faith and fair dealing, and its violation of the Computer Fraud and Abuse Act, 18 U.S.C. § 1030, to recover damages stemming from Apple's unlawful, unconscionable, and intentional sabotage of older model iPhones."

Count 3: (Illinois Class) Breach of the Covenant of Good Faith and Fair Dealing

The Neiland Class Action is Demanding $9,999,000 as noted from the graphic below directly from the Court Docket.

Sean Neilan vs Apple, Class Action From Northern District of Illinois by Jack Purcher on Scribd