Home Archives Contact Us Subscribe Twitter Facebook MeWe Patently Mobile
Nearly 67,000 iPhone users Jump on Board Korean Lawsuit against Apple with Law Firm Saying Apple's Apology isn't Enough
Apple's iPhone was the Best Selling Tech Product in 2017 that Stood in a Class of its own

Despite Apple's Public Apology and Explanation of Battery Performance, another Class Action was Filed Yesterday in San Jose 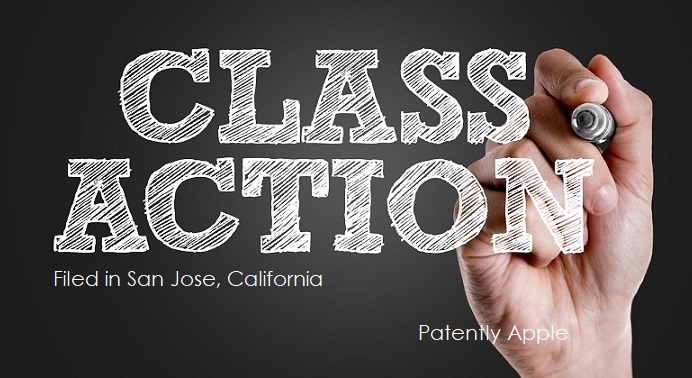 A new Class Action lawsuit was filed in San Jose yesterday by Aniledis Batista and Paul Sohayegh on four counts, the very day that Apple published a formal apology and explanation over the performance of batteries. The company will, in the New Year, offer Apple customers the ability to get a new battery for iPhone models beginning with the iPhone 6 for $29, from the standard $79.

Yet some think the gesture misses the boat and it's not enough. A massive lawsuit is being prepared in South Korea with 67,000 iPhone users signing on. The lawyer in that case in the making stated that "Apple did create a compensation plan, but it is too light considering the illegality of its actions and the damage customers had to bear, especially for those who already changed phones instead of replacing batteries."

Whether Apple's new offer will have any sway with future Class Action lawsuits is unknown at this time as many iPhone users will likely take advantage of the $29 battery deal. However, legally, the issue isn't just the battery, it's iPhone users not being advised of the issue first hand so that they could purchase a new battery rather than buy a new iPhone to get zippier performance.

The Class action filed by Aniledis Batista and Paul Sohayegh begins with the 'Nature of the Action' as follows in full:

"Plaintiffs bring this action against Apple for deceptive trade practices and false advertising in violation of New York General Business Law § 349 and § 350 and the common law. Plaintiffs and other owners of Apple's iPhone models 7, 6S, 6, and SE (collectively, "older iPhones") were harmed when their devices' software or operating systems ("iOS") were updated to the then-newest version ("iOS updates"). The iOS updates significantly slowed down their iPhones and interfered with the normal usage of their devices, leaving Plaintiffs with a difficult choice: to continue using a slow and at time inoperable device that disrupts everyday life, or spend hundreds of dollars to purchase a new phone.

Apple explicitly represented to Plaintiffs and the public that its iOS updates are compatible with and support older iPhones, as evidenced by the fact that Plaintiffs and Class Members were prompted to install the iOS updates on their iPhones.

Following media traction of reports on Reddit, Geekbench, and various technology news sites evidencing Apple's planned obsolescence of older iPhones, on December 20, 2017, Apple admitted that it has been deliberately slowing the performance (formally referred to as the "CPU" or "CPU Frequency") of older iPhones.

As a result of Apple's deceptive and unlawful conduct, millions of consumers are led to believe that their iPhones have become obsolete and are consequently compelled to purchase the most recent iPhone model(s), which are currently the iPhone 8 and iPhone X. Customers who choose not to or cannot afford new iPhones, which generally cost several hundreds of dollars, are left with iPhones with drastically diminished performance such that they are effectively useless.

This action centers upon Apple's negligent, reckless, or intentional omission or failure to disclose to Plaintiffs and Class Members, at the time of purchase and at the time they downloaded Apple's iOS updates, that the new operating system would materially slow down and/or otherwise interfere with the operation of their iPhones. Apple represented and advertised at the moment before, or of, download that iOS updates would improve performance Plaintiffs' and Class Members devices, a statement Apple admittedly knew to be false.