As 2017 is closing, new class action lawsuits have been filed in various courts against Apple. Class Action numbers 16 and 17 were filed on Friday. The first lawsuit was filed by Kim Burton and William Ellis of Missouri, while the second lawsuit was filed by Neill McInnis and J. Scott Archer of Mississippi.

After a while, the lawsuits all tend to blur into one, with the complaints almost mirroring each other at times. In the Missouri case they bring in the iPad as well. This case, as with most, point to iOS upgrades slowing down their devices and make it clear that Apple's purpose for slowing iDevices is to get Apple fans to buy new devices on a rotating basis.

They further noted that Apple goes out of their way to fight third party repair shops as a means to make it difficult to repair devices at reasonable prices. They point to a Verge report titled "Why Apple and other tech companies are fighting to keep devices hard to repair," as just more 'proof' that Apple purposely pushes customers into buying new iPhones.

For more details on both of these cases, review the full Class Action lawsuit filings below provided to you courtesy of Patently Apple.

Please note that it's been reported that lawsuits against Apple on this issue will be coming from France, South Korea and Australia in 2018.

A Few Interesting Reports on the Issue

A report posted yesterday by Business Insider says that Tim Cook needs to take responsibility for Apple's battery scandal. The report noted that "Making a public apology seems like part of the job responsibility for a CEO. Cook made over $12 million in 2017, and he flies on private jets furnished by Apple. It seems like attaching his name to an apology is the least he can do for Apple users who now feel betrayed. Cook has signed letters on Apple's website before, so it wouldn't be unprecedented.

Yesterday 9to5Mac posted a report titled "Do you think Apple's apology for how it handled the iPhone slowdown controversy goes far enough?" The report ended with a Poll. The results of the poll, as of this morning, are noted in the screenshot below. 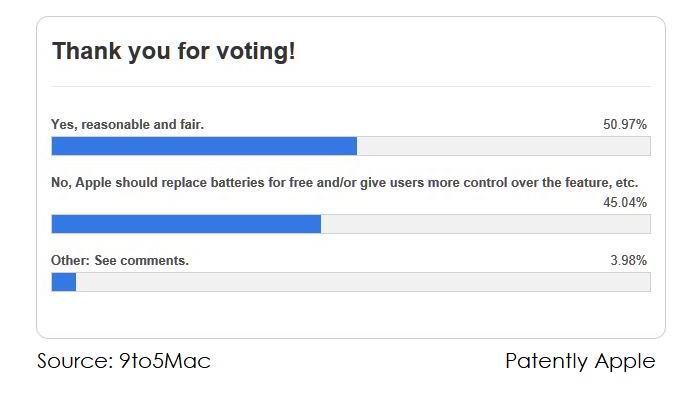