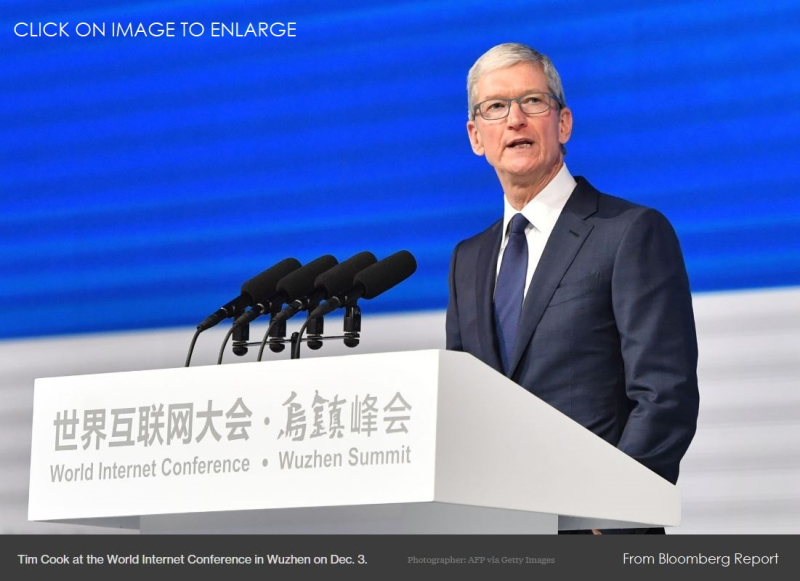 Adam Lashinsky Interviewed Apple's CEO at Fortune's Global Forum and the general theme was about Cook's keynote at China's Internet Conference on Sunday. Cook has been harshly criticized for appearing to endorse the Chinese government's Internet policy, which tightly controls the flow of information in the communist nation. During Sunday's keynote in China, Cook told the those attending the event that "the theme of this conference – developing a digital economy for openness and shared benefits – is a vision we at Apple share" adding that Apple "is proud to have worked alongside many of our partners in China to help build a community that will join a common future in cyberspace."

Cook has been quick to criticize the U.S. President for anything Cook is against quite openly and publicly and yet for China, it's all smiles and roses for the Communist President Xi Jinping because Apple can't afford to lose business in China if they were to criticize the government. It's highly hypocritical. Yet as CEO he feels that he has to support and work with China or face a crashing stock price. It's a tough position to be in.

What are some of Cook's critics saying? Senator Leahy, who probed Apple's ties to China, told CNBC yesterday that "Apple has a 'moral obligation' to push back in China." Earlier this year when Cook was asked to provide a statement condemning the Chinese government's censorship, Apple told the senators that "actions are our most powerful statement."

"Apple is clearly a force for good in China, but I also believe it and other tech companies must continue to push back on Chinese suppression of free expression," Leahy said. 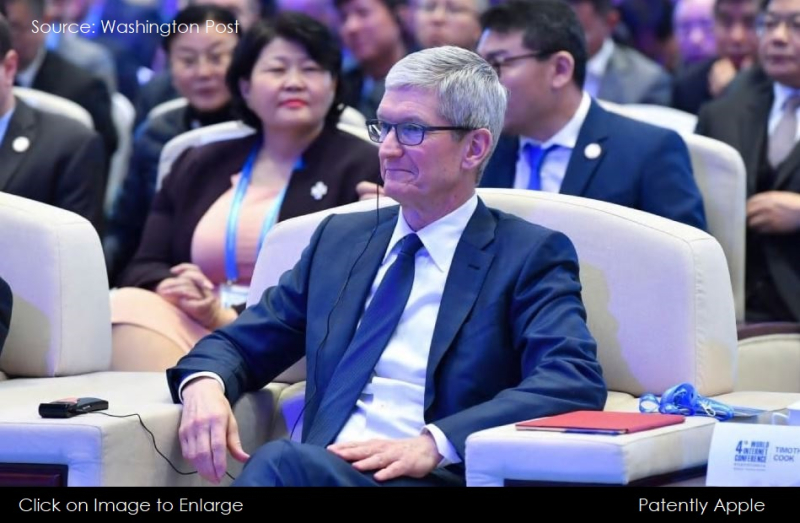 The Washington Post wrote a report on this titled "Apple CEO backs China's vision of an 'open' Internet as censorship reaches new heights."

The Washington Post wrote that "The World Internet Conference held in the eastern Chinese city of Wuzhen is meant to promote China's vision of 'cyber-sovereignty' — the idea that governments all over the world should have the right to control what appears on the Internet in their countries.

In practice, in China, that amounts to the largest system of censorship and digital surveillance in the world, where criticism of the Communist Party is sharply curtailed and can even land you in jail.

But that wasn't mentioned when Cook delivered a keynote speech on the opening day of the gathering Sunday."

Of course keep in mind that the Washington Post is owned by Amazon who isn't doing well in China. The chart below shows that in 2016 Amazon had 1% of online sales in China. Hence the easy criticism of Apple's CEO for keeping Apple viable in China. 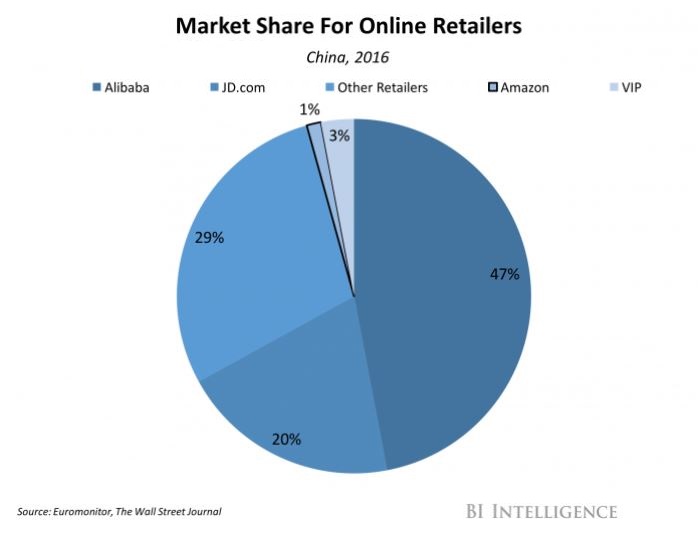 Bloomberg wrote a stinging report against Apple on Sunday titled "Cook Kisses the Ring." The report noted that "Tim Cook is desperate to hold onto any remaining scraps of the China market. That's a boon for the country's model for the internet, and the local players who dominate."

In the end, these are just some of what the critics are saying about Apple's keynote and endorsement of China's internet "vision." If the U.S. held China's vision of the internet, most would think of it as a nightmare. Yet the changeover from pure communism to capitalism isn't an easy one and China's form of capitalism will never look like our version of it in my lifetime. Staying engaged with China will lead to more change.

What's the alternative? As Alibaba's Jack Ma put it: When trade stops, peace stops." Blunt and to the point. Sitting on the sidelines and criticizing isn't always the solution and this is why Apple's CEO has decided to stay engaged.