Myths are carefully devised by many companies to project advanced breakthroughs and provide marketing departments something to crow about in interviews. It helps to create a mystique around a product or brand. In some cases I'm sure that the marketing department is sometimes in the dark as to what work their engineers are actually working on and today we're clearly able to see a contradiction in Apple's marketing versus reality.

Apple has made it clear that they never ever considered fingerprint detection on the iPhone X or OLED display. Perhaps in key circles that statement is 100% true. However, a patent granted to Apple in both the U.S. and Europe recently clearly details how a specialized OLED display was designed to read a fingerprint, clear and simple and it's actually core to the invention – there's no getting around that fact.

The patent issued to Apple relates to a next-gen integrated silicon-OLED display that could be used with an iPhone, an iPad and iPod touch and it's not about LCD displays. So while Apple publicly states that they never ever considered fingerprint ID in the display for iPhone X somewhat contradicts what their engineers actually invented. The patent application was only filed in 2015 and granted in this quarter. So it's not some ancient relic.

Of course it's possible that different teams worked on different solutions and perhaps different iDevices. But the bottom line is that Apple did in fact work on fingerprint ID technology integrated into OLED displays plain and simple.

Stackup configurations can include a Silicon substrate, an array of transistors, one or more metallization layers, one or more vias, an OLED stack, color filters, touch sensors, and additional components and circuitry.

Arranging the OLED subpixels side-by-side with the touch sensors can also lead to a wider viewing angle display with a higher contrast ratio, higher brightness, and more vibrant colors without compromising touch sensitivity.

Due to the higher number of pixels per inch, the stackup configurations can also include one or more additional components such as electrostatic discharge devices, switches, near-field imagers, near-infrared emitters, and near-infrared detectors.

The additional components can improve the functionality of the device by consuming less power, enhancing touch sensitivity, and enhancing fingerprint detection capabilities.

In some examples, the integrated Silicon-OLED display and touch sensor panel can be coupled with one or more fiber optic magnifiers to achieve a portable electronic device with extended touch and display capability.

The patent made it clear early on that integrated Silicon-OLED displays could be used for the iPhone (mobile telephones), the iPad (tablet computing devices) and iPod touch, (media players). Apple's patent FIG. 7D below shows the display in context with an iPad. 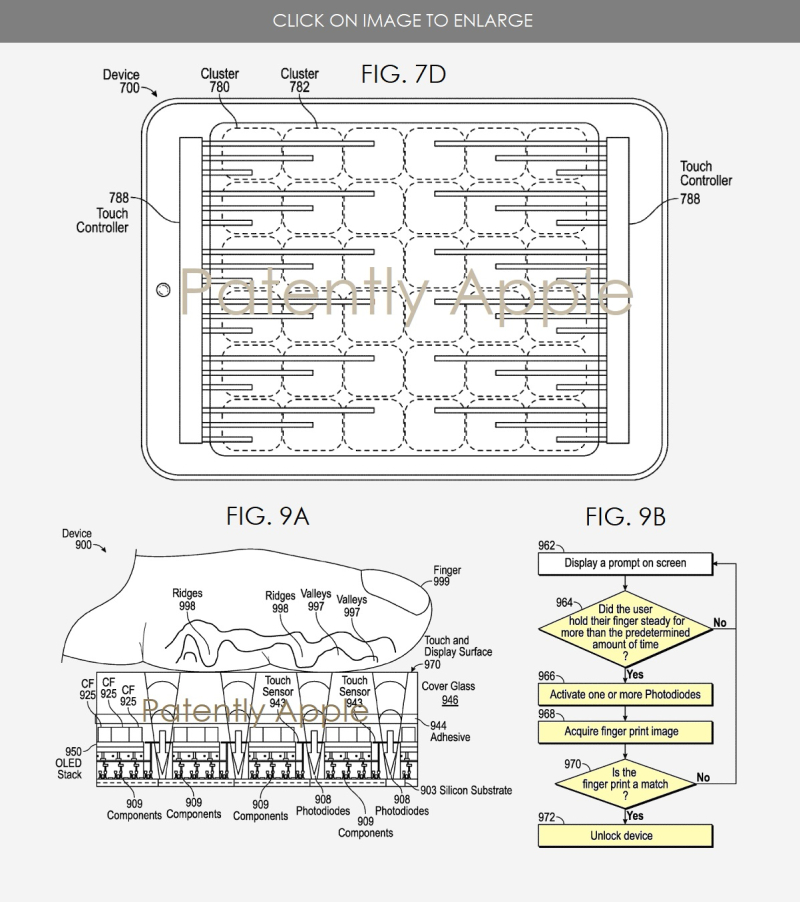 In Apple's patent FIG. 9A illustrated above we're able to see a cross-sectional view of an exemplary integrated Silicon-OLED display and touch sensor panel with fingerprint detection.

Technically, device #900 can include an OLED stack #950, components #909, color filters CF 925, photodiode #908, and touch sensors #943 disposed on Silicon substrate #903. Components 909 can include, but are not limited to, an array of transistors, vias, insulating layers, ESD devices, switches, and metallization layers.

An object, such as finger #999, can touch or swipe the touch and display surface #970 of the device. The photodiodes can be used to detect a fingerprint image using near-field imaging. Near-field imaging allows for arbitrarily small details to be resolved, and can be well-suited for fingerprint detection.

In some examples, the device can include discrete components for the OLED subpixels to display one or more images, touch sensors to sense a touch or hover, and photodiodes to capture a fingerprint image, thereby allowing the device to operate one or more of the three functionalities simultaneously.

Another angle of this invention is covered in Patent FIGS. 11A-11B as presented below which illustrates cross-sectional views of exemplary integrated Silicon-OLED display and touch sensor panels coupled to fiber optic magnifiers. 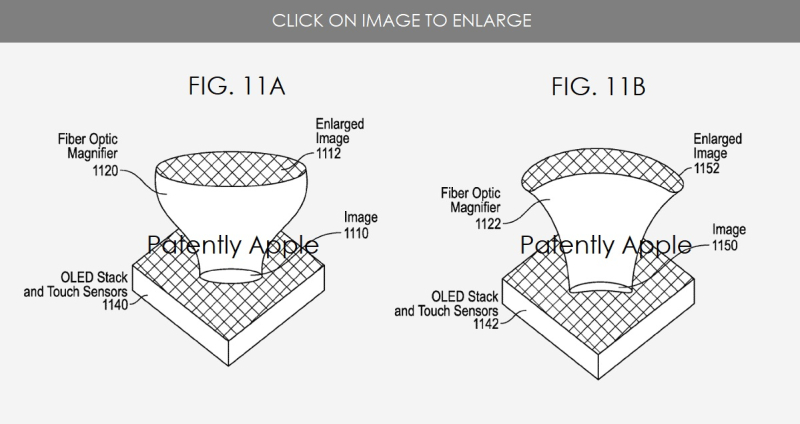 Apple was granted a patent for this invention in the last month both in the U.S. and Europe. It should be noted that Apple has a few patents with an OLED display that could read a fingerprint. One such patent report included the patent figures noted below. The actual patent filing revealed it related to OLED displays as well. Did the iPhone X team never ever consider a fingerprint technology for OLED displays? Hmm, Perhaps, but reality shows us that they were simultaneously working on an alternative methodology for some iDevices, if not the iPhone X. 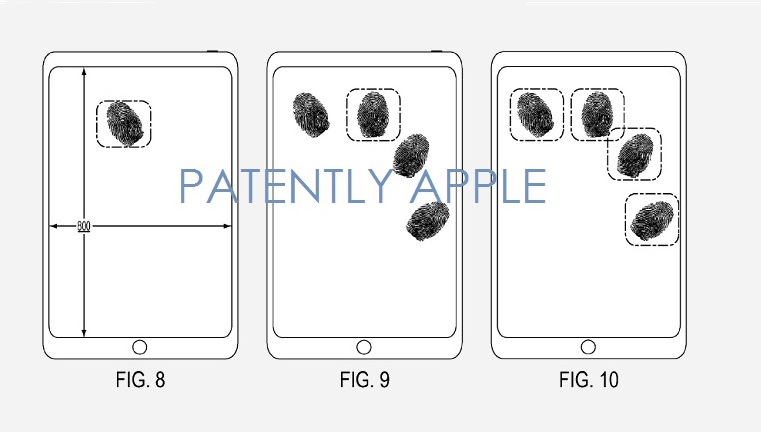