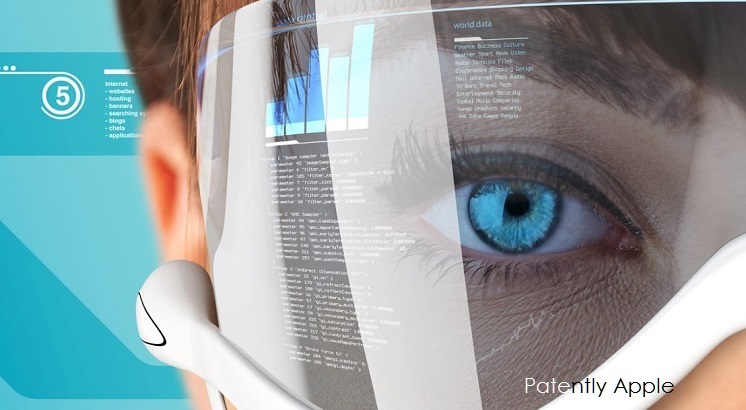 In July Patently Apple posted a report titled "Apple Patent Reveals the Exciting Possibility of Augmented Reality Smartglasses." The invention for the AR glasses was inherited when acquiring Metaio who likely played a large role in creating ARKit that brought AR to iPhone X. This week the European Patent Office published a patent application from Apple that proves that an Apple team is in fact working on Apple's future near-eye displays for AR and VR glasses. The team isn't from Metaio but one created by Apple.

One of the engineers on Apple's optical team is Graham Myhre, Display Exploration Engineer who came to Apple from Lytro who is a leader in light field cameras and light field VR experiences. In total, six Apple engineers were behind this invention.

So while Apple's Tim Cook told the U.K.'s Independent in October that the display technology required to pull off AR glasses is a huge challenge and not available today, we know from this latest patent filing that Apple has been working on this solution since at minimum June 2017 when the patent was filed if not earlier.

It can be challenging to design devices such as these. If care is not taken, some of the field of view produced by a near-eye display may not be viewable from a single eye position.

Apple's invention covers an electronic device such as a head-mounted device or glasses that may have one or more near-eye displays that produce images for a user.

The head-mounted device may be a pair of virtual reality glasses or may be an augmented reality headset that allows a viewer to view both computer-generated images and real-world objects in the viewer's surrounding environment.

An illustrative system having a device with one or more near-eye display systems is shown in FIG. 1 below. System #10 may be a head-mounted device having one or more displays such as near-eye display #20 mounted to support structure #12 that may have the shape of a pair of eyeglasses (e.g., supporting frames), may form a housing having a helmet shape, or may have other configurations to help in mounting and securing the components of the near-eye display on the head or near the eye of a user. 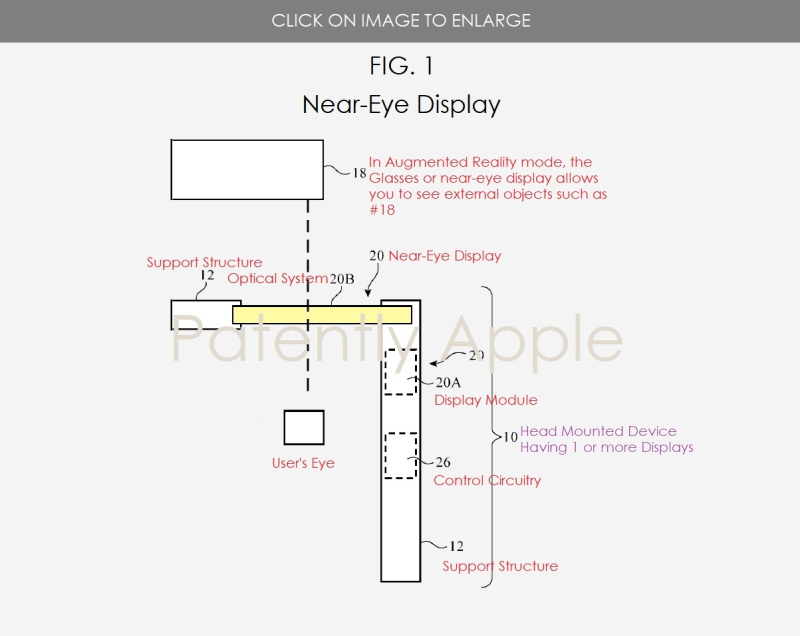 Display #20A may be a liquid crystal display, an organic light-emitting diode display, or display of other types. Optical system #20B may form a lens that allows a viewer (e.g., viewer's eye #16) to view images on the display.

There may be two optical systems 20B (e.g., for forming left and right lenses) associated with respective left and right eyes. A single display may produce images for one or both eyes or a pair of displays may be used to display images for eyes.

In configurations with multiple displays, the focal length and positions of the lenses formed by components #20B may be selected so that any gap present between the displays will not be visible to a user (i.e., so that the images of the left and right displays overlap or merge seamlessly).

In configurations in which system 10 is a pair of augmented reality glasses, display #20 may be transparent and/or display #20 may be provided with optical mixers such as half-silvered mirrors to allow viewer 16 to simultaneously view images on display 20 and external objects such as object 18 in the surrounding environment.

System #10 may, if desired, include wireless circuitry and/or other circuitry to support communications with a computer or other external equipment.

In addition, system #10 may include sensors such as an accelerometer, compass, an ambient light sensor or other light detector, a proximity sensor, a scanning laser system, an images sensor, and/or other sensors may be used in gathering input during operation of the display.

During operation, the control circuitry may supply image content to the display. The content may be remotely received from a computer or other content source coupled to system #10 (like Apple TV or an iDevice).

Apple's patent FIG. 2A noted below is a top view of an illustrative near-eye display system having an optical system including an input coupler and an output coupler at least partially embedded in a waveguide substrate. 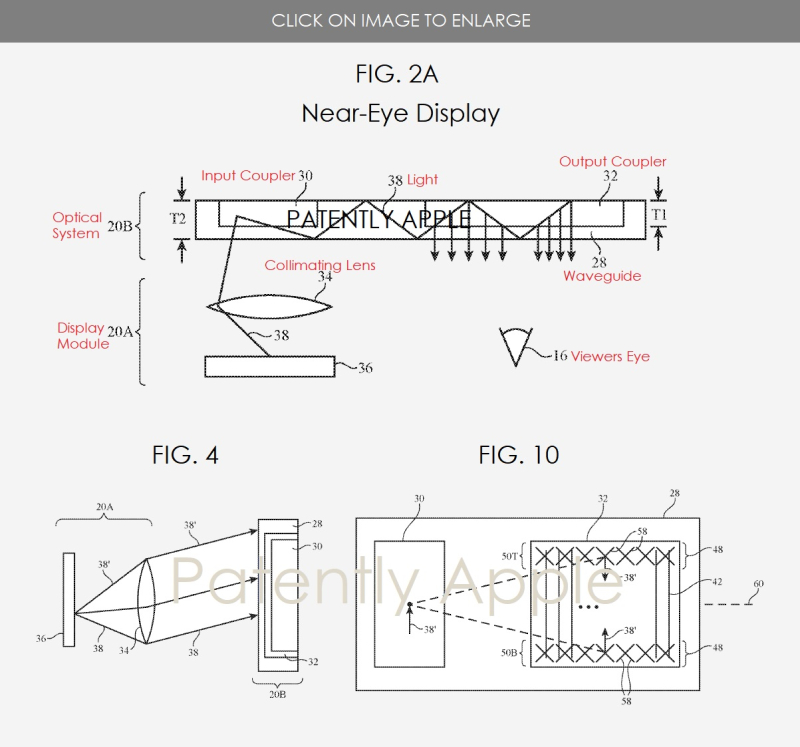 Apple's patent application was filed in Europe back in June 2017 and made public on December 28, 2017. Considering that this is a patent application, the timing of such a product to market is unknown at this time.