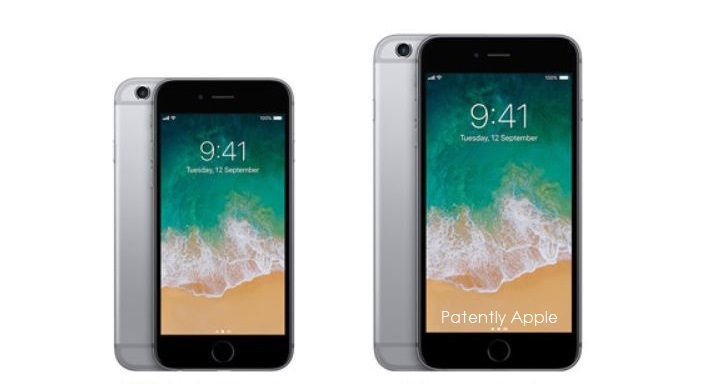 Earlier this month Patently Apple posted a report titled "Apple's iPhone 8 Plus with its Dual Lens Camera Out-Ships the iPhone 8 with Single Camera right out of the Gate." The report noted that a new trend had emerged. While Apple shipped 5.4 million units of the iPhone 8 with a 4.7" display in the last week of September while it shipped 6.3 million of the larger iPhone 8 Plus with its 5.5" display. That made the iPhone 8 Plus the first iPhone Plus model to out-ship its smaller sibling in a single quarter. Now IDC has published a report noting the trend and forecasts that phablets will actually dominate in 2018 and accelerate by 2021.

IDC's new report states that "phablets (smartphones with a screen size of 5.5 inches to <7 inches) will far outpace total market growth by climbing from 611 million units in 2017 to 1 billion units in 2021, representing a five-year compound annual growth rate (CAGR) of 18.1%.

In comparison, the total smartphone market is expected to grow at a 3.0% CAGR (during the same period, while normal smartphones (under 5.5 inches) will decline 7.4%. Overall, IDC lowered its previous forecast for 2018-2021 by 1.1%-1.5%,depending on the year. The largest changes came in the China and Middle East & Africa regions, which are still expected to grow through 2021."

Phablets to Dominate the Smartphone Market 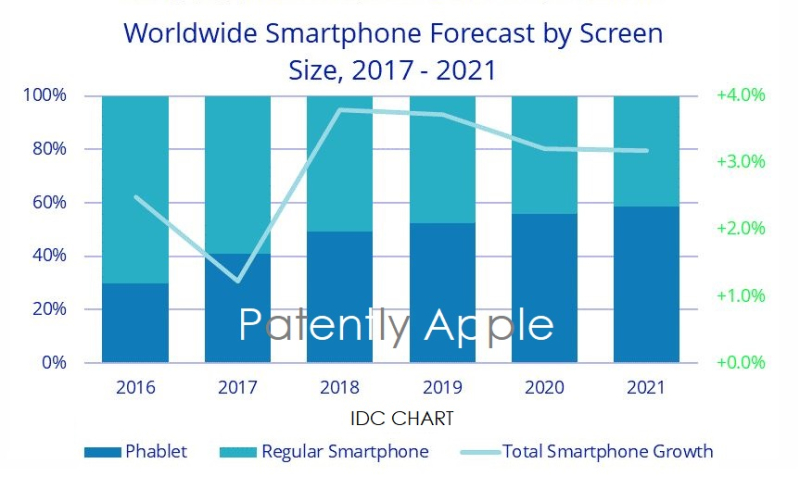 Ryan Reith, program vice president with IDC's Worldwide Quarterly Mobile Device Trackers noted in the report that "In 2012, phablets were just 1% of smartphone shipments and now they are approaching 50% of the market just a few years later. The rapid transition to bezel-less smartphones will help minimize the device footprint while growing the screen size from previous generations.

Reith added that "Consumers continue to consume more video entertainment, gaming, social media, and other data-heavy applications on their smartphones making the display size and type a critical factor in smartphone buying decisions.

Apple has also made a massive push into the phablet space and IDC expects its Plus and X devices to account for 41.2% of its shipment volume in 2017 and 50% or more of Apple's iPhone shipments in 2018. If the recent rumors of new, larger screen iPhones in 2018 hold true, then this number will likely grow further as a share of its overall shipment volume.

Anthony Scarsella, research manager with IDC's Worldwide Quarterly Mobile Phone Tracker added to the report by noting that "There is no doubt that 2017 gave birth to the new ultra high-end segment of the smartphone market. The latest flagship devices from Samsung, Apple, Google, LG, and others has pushed the high end to the $850-plus level for the first time. Despite these price hikes, consumers look as if they are willing to swallow the cost just to have the latest and greatest device in their pockets.

Although many consumers may not be able to afford these devices in more price sensitive markets, programs such as device financing combined with trade-in policies are making these devices more attainable to buyers in a number of markets. This growth at the ultra high end translates to higher average selling prices for smartphones throughout the forecast period. By 2021, the last year of our forecast, smartphones will reach an ASP of $317, up from $282 in 2016, representing a CAGR of 2.3%."

Regarding iOS market share, the report noted that "Apple's launch of the iPhone 8/8+ and X in late 2017 set the company up to return to iPhone volume growth in 2017. IDC expects an even bigger rebound in 2018 as channels fill up with inventory of the new models and as price cuts around earlier models enable it to hit lower price points.

Coming off the 7% decline in iPhone shipments in 2016, IDC is forecasting growth of 2.4% in 2017 and 8.1% in 2018. IDC also projects sustained growth for Apple through the later years of the forecast with volumes growing at a five-year CAGR of 3.1%.

The market share war, according to IDC, won't move the needle much through to 2021. They see Android gaining 0.2% while iOS losing 0.2% which is really a wild and useless guess.