While Apple's First-Gen HomePod is set to arrive in 2018, Amazon may Advance Echo with added Pico Projector

On Friday Patently Apple posted a report titled "Ouch! Apple Delays HomePod, a Potential Christmas Gift Hit until 2018." While the news was definitely disappointing to the Apple faithful who were planning on both enjoying Apple's first generation smart speaker and hoping to get them for Christmas gifts this holiday season, Apple decided to push their HomePod speaker delivery time into 2018 without reason. While Apple will be looking forward to introducing their first generation smart speaker, their competition, mainly Amazon, will be upping the ante and integrating pico projectors in to their 2018 Echo device.

A new supply chain report published this morning notes that "Competition in the global smart speaker market is expected to become keen in 2018 as vendors are trying to add more accessories or functions such as 3D lenses or pico projectors into smart voice assistant devices, according to industry sources.

A number of Taiwan-based hardware suppliers are currently developing pico projection modules to be incorporated into smart speaker devices, and shipments of such modules are expected to begin in the first quarter of 2018 at the earliest, said the sources."

In 2017, Patently Mobile posted patent reports about Samsung and Microsoft having patent pending inventions regarding pico projectors built-into future smart speakers. Our cover graphic illustrates Microsoft's invention and the one below is from Samsung. 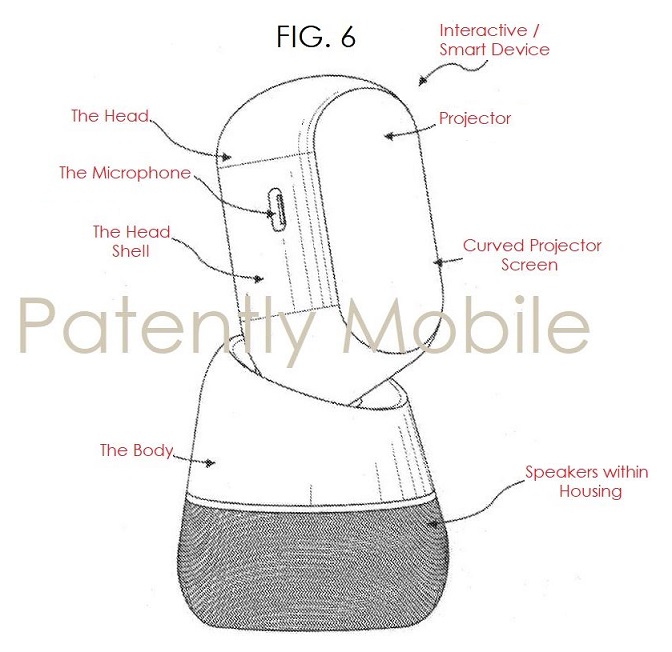 Of course being patents doesn't guarantee that these models will debut in 2018 or ever, but it does go to illustrate a possible trend, one that today's supply chain confirms is likely to be a reality next year from at least Amazon, the company that kick-started the smart speaker category with their Echo branding.

3D lenses, which are built based on time-of-flight (ToF) sensors, are also expected to be combined with smart speakers. The 3D lenses will help users' space and distance sensing accuracy, or enhance the surveillance capability of smart speaker products, said the sources."

On the former point of the 3D lenses assisting users' space and distance sensing accuracy, we noted in September that Apple is working on similar feature. Our patent report stated: "The intelligent sound system uses an iDevice camera and with a depth camera that can analyze where people are sitting, what objects are in the room and automates the speaker arrays to ensure that surround sound would be heard by all, even if family or friends aren't exactly centered to the screen." A "depth camera" is a 3D camera. Apple's patent was in context to a multi-HomePod or related speaker system.

As always, what Apple has in patent form could come to market in months, years or never. But at least we're able to see that Apple's patent pending idea is in sync with an emerging Industry trend.