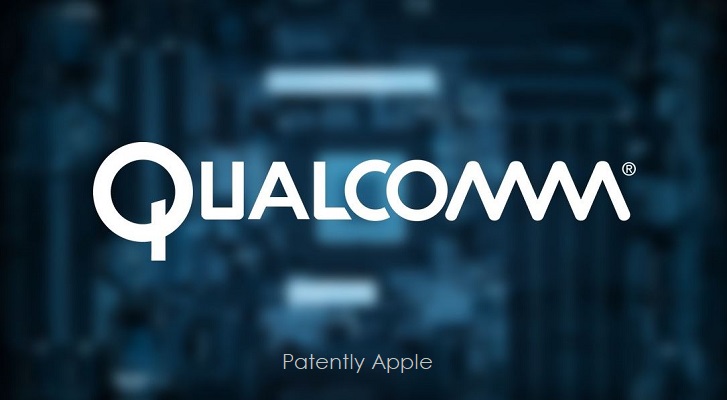 It was just yesterday that Patently Apple posted a report titled "Apple Sues Qualcomm over Two Snapdragon Processors that Infringe on their Intellectual Property. While Apple's lawsuit got the attention of the press, Qualcomm was busy filing yet another patent infringement lawsuit covering multiple patents in Southern California. For some reason Qualcomm hasn't bothered to post a press release on the matter.

In their lawsuit they stated that "Apple has built the most profitable company in the world, thanks in large part to products that rely on Qualcomm's patented technologies. With a market capitalization of more than $700 billion, $246 billion in cash reserves, and a global sphere of influence, Apple has more money and more influence than many countries. Relying heavily on Qualcomm technology and technology Qualcomm has acquired, Apple has become the dominant player in mobile device sales."

Later in the lawsuit reads: "In short, Qualcomm invented many core technologies that make the iPhone (and other smartphones and mobile devices) desirable to consumers in their daily lives.

While Apple built the most successful consumer products in history by relying significantly on technologies pioneered by Qualcomm, Apple refuses to pay for those technologies. Apple's founder boasted that Apple "steals" the great ideas of others—specifically, that "we have always been shameless about stealing great ideas." Apple employees likewise admit that Apple—a relatively late entrant in the mobile space—did not invent many of the iPhone's features. Instead, Apple incorporated, marketed, and commercialized the work of others: "I don't know how many things we can come up with that you could legitimately claim we did first. . . . We had the first commercially successful version of many features but that's different than launching something to market first.". Rather than pay Qualcomm for the technology Apple uses, Apple has taken extraordinary measures to avoid paying Qualcomm for the fair value of Qualcomm's patents."

For those interested in the full arguments made in the lawsuit and the specifics of each count, Patently Apple presents a full copy of the lawsuit to review in the Scribd document below.

For the record, this was Steve Jobs official position on Intellectual Property: On page 396 of Walter Isaacson's Biography of Steve Jobs we read the following: "From the earliest days at Apple, I realized that we thrived when we create intellectual property. If people copied or stole our software, we'd be out of business. If it weren't protected, there'd be no incentive for us to make software or protect designs. If Protection of intellectual property begins to disappear, creative companies will disappear or never get started. But there's a simpler reason: It's wrong to steal. It hurts other people. And it hurts your own character."

Qualcomm's argument referring to a clip out of video where Steve Jobs is talking about stealing is for morons. The video is about stealing ideas in the context of inspiration, not intellectual property.

For example: Apple wasn't the first with an MP3 Player. But they created a revolutionary UI for a next generation MP3 player. They created iTunes so users could make playlists. They created the worlds best online Music Store to buy and not steal music and broke the backs of music studios by fairly pricing tunes at 99 cents a pop without having to buy an full album with nothing but filler.  Was Apple inspired by the MP3 Player. Yes. But did they "steal" the idea? No. They took what was in the market and reinvented it and that's legal. They didn't step on Sony's IP. So in the end, the blip of Jobs talking about stealing has to be put into context as it wasn't about stealing IP.

Using this argument in a lawsuit is simply an attempt to pull the wool over the Judge's eyes. This is a sign of desperation to use such babble. It's one thing for Android bloggers to fire off this kind of out of context nonsense, but for Qualcomm's legal counsel to use it is scurrilous.