Today the US Patent & Trademark Office published a camera centric patent application from Apple titled 'Impact Absorber,' which generally relates to position control and more specifically to vibration reduction for managing the motion of a camera.

Apple notes that in some small form factor cameras that include autofocus mechanisms may also incorporate optical image stabilization (OIS) mechanisms that may sense and react to external excitation/disturbance by adjusting location of the optical lens on the X and/or Y axis in an attempt to compensate for unwanted motion of the lens. In such systems, ability to dampen vibration of the position of the lens or absorb impact of the lens carrier with other components of the camera is useful.

The key part of the patent is described under the sub-header "Introduction to Vibration Dampeners or Impact Absorption Members for Miniature Autofocus Cameras," which you could check out here. 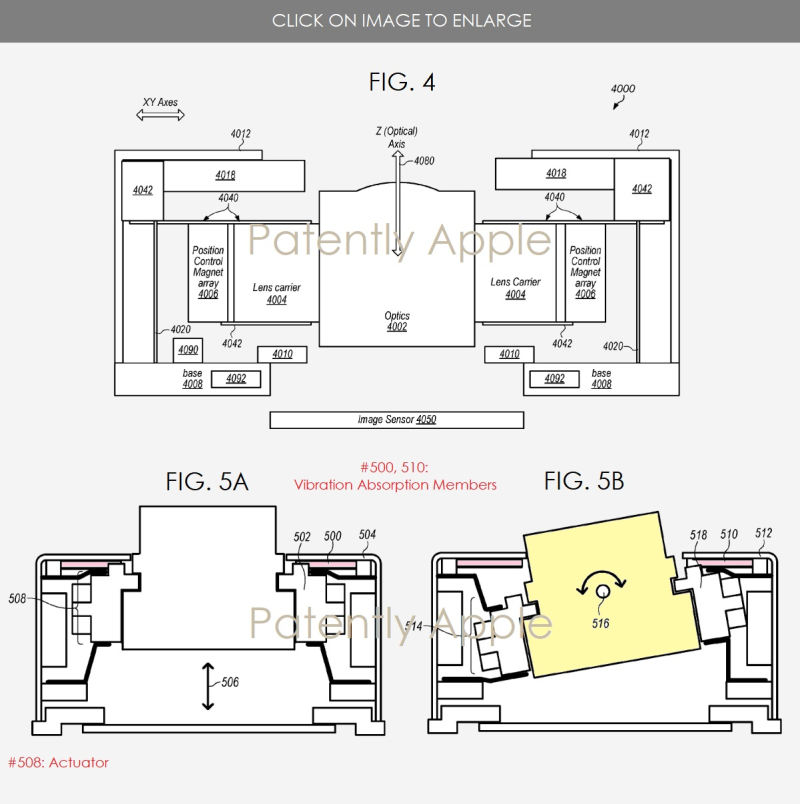 Further to FIG. 4, Apple notes that "In some embodiments, each position control magnet array #4006 is poled so as to generate a magnetic field, the useful component of which for the autofocus function is orthogonal to the optical axis of the camera/lens, and orthogonal to the plane of each magnet #4006 proximate to the autofocus coil #4004, and where the fields for all four magnets are all either directed towards the autofocus coil or away from it, so that the Lorentz forces from all four magnets act in the same direction along the optical axis #4080. Impact absorption members #4018 and spacers #4042 are also shown.

In the C/NET video below, they take a look at the Pixel 2 vs. iPhone 8 Plus. The topic of image stabilization starts at about the 2:14 mark. The videographer spends 9 seconds showing the stability of the Pixel 2 when walking around and about 3.5 seconds on the iPhone 8 Plus and quickly determined that the Pixel 2 won. However the video really didn't prove that out.

On paper EIS sounds impressive but I've yet to see a single side by side comparison that shows how the Pixel 2's methodology is actually better that what the iPhone X is using. I've seen some marketing hack videos but there really about showing EIS on and EIS off and pretending the shaky videos are from an iPhone. The more realistic C/NET has no such radical movement on the iPhone.

In the end, today's patent shows us Apple's continual work on advancing OIS on the iPhone and with Apple acquiring InVisage last week (one, two), they gain a technology called 'Global Shutter' which is defined this way:

In photography, timing is everything. With our global shutter, you'll never miss that fleeting moment; instead, you'll be capturing motion instantly. Traditional cameras have a rolling shutter—this means that portions of the image are photographed in sequence, one after the other. If you happen to move too much or too fast, with rolling shutter the image will become distorted. This distortion can occur in both still photos and video. With InVisage's global shutter, you can capture 4K videos and still photos instantly, with zero distortion.

When or if Apple decides to work Global Shutter into a future iPhone camera is unknown at this time. However, in the race to provide consumers with better cameras year-in and year-out against the competition, the Global Shutter feature seems to be a way to weaponize future iPhone cameras with the ability to deliver the most stable shots, still or video, available on the planet.