A Michigan Company by the name of Nartron is suing Apple for infringing their patent titled "Capacitive responsive electronic switching circuit." The company claims that Apple's every iDevice comprises of capacitive touch sensing devices that covers multitouch and therefore infringes their patent, even though Apple uses touch technology from Broadcom and Texas Instruments. 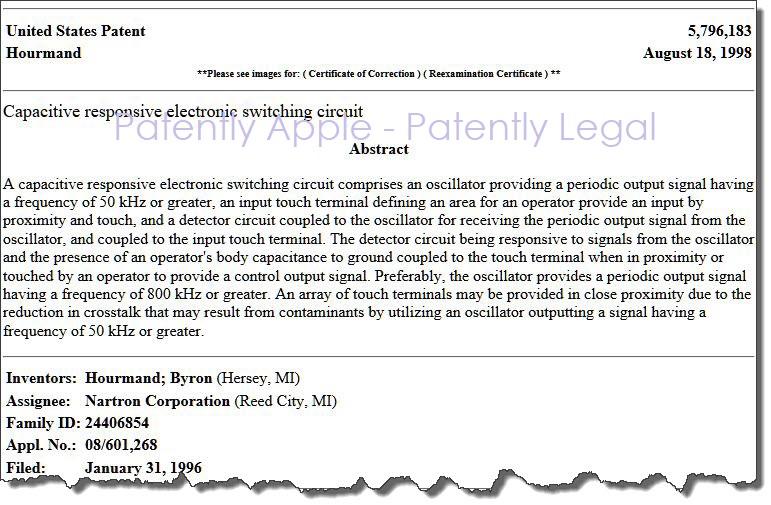 Nartron's lawsuit provides some background of the company's role in the history of touch technology as follows:

"The touchscreen's path to preeminence did not happen overnight. Established in 1967, Nartron was an early pioneer in touchscreen technology. Nartron is credited with inventing the electronic touch screen in 1995. For example, Nartron's "Smart Touch®" sensing technology provided a breakthrough in human interface technology by giving direct access to computer power, such as with highly successful handheld devices and smartphones.

Nartron's experienced product development team located at its 200 acre complex in Reed City, Michigan has been awarded several hundred patents for exceptional innovation. Nartron's leadership in innovation was recognized by Inc. Magazine, which named Nartron as one of America's Top 50 Innovators and one of the "Top 30" firms for leading the technological, industrial, and social movement in the United States that has taken place over the past 30 years.

According to Nartron's lawsuit, all of Apple's iDevices infringe on one or more claims of their 5,796,183 patent (the'183 patent).

On information and belief, the Accused Products use, among other things, touch controller chips such as those manufactured by Broadcom (e.g. BCM5976) and Texas Instruments (e.g., TI 343S0694) to recognize and interpret the users' input. For example, the touchscreen controller, individually or in combination of other hardware and software components, takes a periodic signal from an oscillator with a pre-defined frequency, and selectively provides a signal output frequency to each row of input touch terminals. On the touchscreen of the Accused Products, the input touch terminals define adjacent areas on a substrate for a user to provide inputs. When touched (or in close proximity) by the user, a detector circuit within the Accused Products respond to signals from the oscillator through the touchscreen controller and the presence of the user's body capacitance to ground to provide a control output signal. The Accused Products use input and output frequencies such that the change in impedance caused by the user's touch differs from any change in impedance that may create an electrical path caused by contaminates on the substrate. Based on the above, the Accused Products infringe at least, but not limited to, claim 40 of the '183 patent.

The patent infringement case presented in today's report was filed in the Michigan Eastern District Court, Detroit Office. The Presiding Judge in this case is noted as being Judge Avern Cohn, with referring Judge noted as Stephanie Dawkins Davis. It should be noted that the infringement case was formerly filed by UUSI, LLC d/b/a Nartron ("Nartron").