While Google Glass died an ugly public death, some aspects of it are still in play in industrial applications, according to several reports published in April including one from CNBC. On the consumer side, the pirate looking device, as pictured below, was rejected as it stood out in a crowd in a negative way leading to some users actually being assaulted.

The project quietly shifted to Google's Nest division in the hopes that the new team would be able to bring in fresh eyes and ideas and reinvent Google Glass to better blend into the public. Patently Apple recently discovered a patent application published by the U.S. Patent Office that confirms that Google engineers are looking at a whole new approach to Google Glass using micro-LED displays.

The approach of using micro-LED displays is of interest because Apple owns LuxVue, one of the leading micro-LED companies around the world.

In January 2016 Patently Apple posted a report titled "Apple's 'Secret' VR Team isn't that Secret Anymore." Apple was clearly building a team of experts in AR and VR and in April 2017 we further learned that Apple had hired Jeff Norris who was Mission Operations Innovation Lead at NASA. His 160-man team were pioneers in developing apps for the Oculus Rift, Vive, Microsoft's HoloLens and more.

In September we posted a report titled "Advances in Micro-LED Displays are being made and Apple's LuxVue owns a Key Patent to Advance Production." The report covered advances in micro-LED displays and a forecast for applications for the new displays that looks very promising.

In the beginning, it's thought that devices with smaller display needs like a smartwatch or smartglasses could be the entry point for micro-LED. Apple's LuxVue was granted a patent for smart-pixel micro-LED displays in July. We also know that Apple legal has begun to include 'Smartglasses' in a number for recent trademark filings (one and two). And lastly, Apple was granted a patent this past July for AR Glasses by Metaio, the company Apple acquired and was instrumental in developing ARKit.

Holistically speaking, putting together a cool pair of smartglasses using high quality micro-LED displays with the right audio, battery life and applications is going to take time and we know that Apple is on this project as this report is being read. Yet Apple's CEO Tim Cook wanted to tone down the media's view that such a product was just around the corner.

While Apple will never give us a true smartglasses road map, Cook told the UK's Independent earlier last month that "today I can tell you the technology itself doesn't exist to do that in a quality way. The display technology required, as well as putting enough stuff around your face – there's huge challenges with that."

Cook added that "The field of view, the quality of the display itself, it's not there yet and as with all of its products, Apple will only ship something if it feels it can do it in a quality way."

With Google's recent patent however, we're able to see that micro-LED displays are likely to find a home in smartglasses from Google and perhaps Apple down the road. With Apple about to become a leader in AR via iOS, smartglasses would be an idea product to cement their lead.

About the Google Glass Patent with micro-LED

For now, we get to see what Google is up to with this recent patent filing. 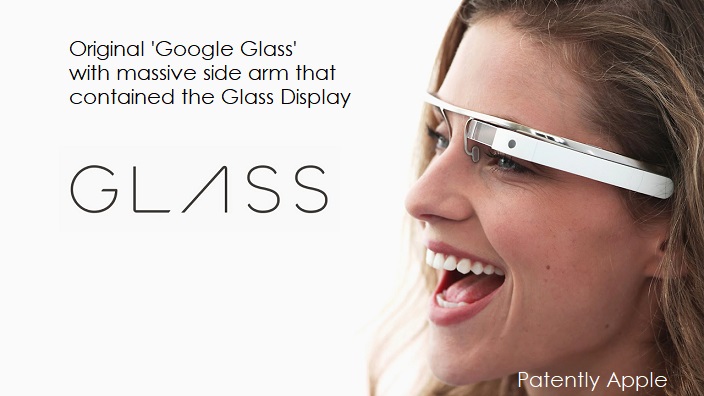 As you can see in Google's patent FIG. 1 below, the new Google Glass system is designed to appear like everyday glasses that could blend right into the public without causing suspicion and trouble for the user. The system mellows out and uses micro-LED panels on both the right and left eyepieces. 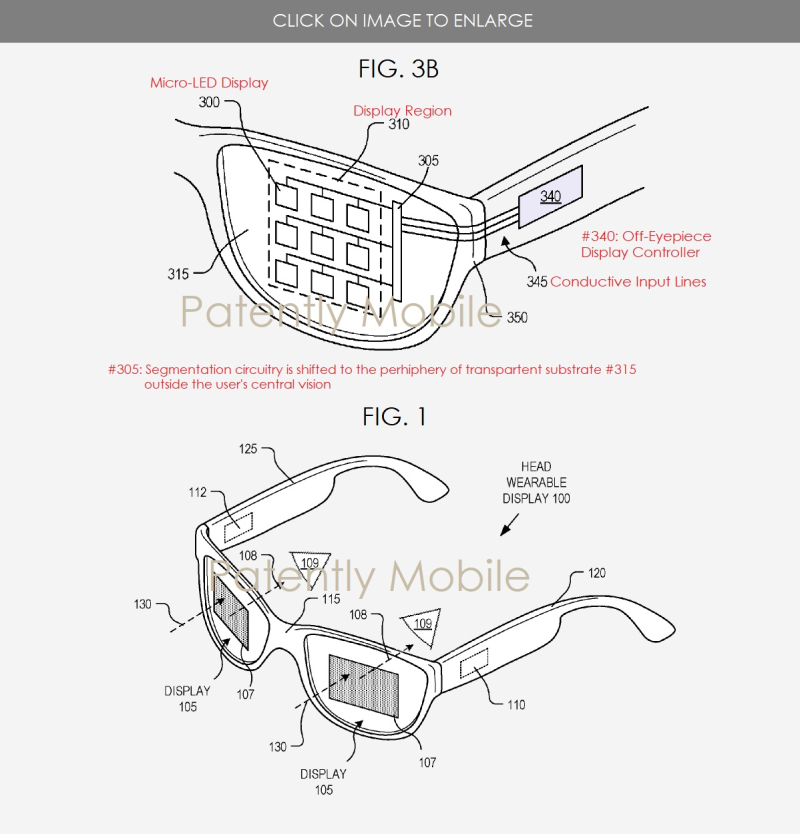 Google's patent FIG. 3B above is a perspective illustration of a portion of a head wearable display showing how image segmentation circuitry is embedded within the transparent substrate adjacent to the array of micro-LED panels.

Technically, Google's patent FIG. 1 is a perspective view illustration of a head wearable display #100 implemented with reflected LED micro-display panels, in accordance with an embodiment of the disclosure. The illustrated embodiment of head wearable display includes displays #105, circuitry #110 and #112, and a frame assembly configured for wearing on a head of a user.

The illustrated embodiment of the frame assembly includes a front frame #115, a left ear arm #120, and a right ear arm #125. In the illustrated embodiment, circuitry #110 and #112 are embedded into or otherwise disposed in or on left ear arm and right ear arm respectively; however, the circuitry may also be distributed in or on the front frame. The circuitry may include various electronics including one or more display controllers (e.g., one for each eyepiece #105), a microprocessor, interfaces, one or more wireless transceivers, a battery, a camera module, a speaker, etc.

Additionally, patent FIG. 1 illustrates displays as see-through eyepieces that combine ambient light #130 with display images #108 to present the user with an augmented reality.

In another embodiment, the displays #105 may not be see-through, but rather present the user with a virtual reality.

Additionally, the head wearable display may assume other shapes and form factors than conventional eyewear, such as goggles, a visor, etc.

At the moment, there's a tech war in play for the future of computing on several fronts; AI and machine learning, smartglasses of one kind or another and AR/VR applications.

In October Patently Apple posted two reports (one and two ) about how Google is trying to peddle the idea that Apple is older school with Mobile First thinking whereas they're the future being an AI First company.

Even though Google Glass suffered a colossal loss initially, they're pushing hard to bringing about a second generation of the device to get ahead of Apple with something that makes AI and Machine Learning stand out as their leadership device as the iPhone was to Apple's Mobile revolution. Google wants to make that connection with the public.

Microsoft is pushing HoloLens and yesterday their developer conference in London pushed all-things AI and machine learning as well while Apple continues to publish their machine learning journal to win over developers to their platform.

Just yesterday, Microsoft's SVP of Surface devices Panos Panay said at their conference in London: "Today we're here to talk about the future. You're sitting at one of the most exciting times possible. For technology is moving you. From the essence of mixed reality; where artificial intelligence is taking us; what data is driving us toward. We're at the edge of a shift towards more intelligent computing."

Below is the slide that Panay put up while making the statement noted above. They're pushing the very same kind of message as Google is on the same three major point of mixed reality, AI and Machine Learning. While Apple couldn't give a rats [ass] about being first to market with smartglasses, as Cook told the Independent in October, it's clear that Google and Microsoft are going full throttle to ensure that Apple is not seen as a leader in AI and Machine Learning but rather a follower far behind.

Though in the end, that's going to be a very hard sell being that Apple surprised both competitors with ARKit and AR for iOS and iPhone X. Apple has shown that they're on track with future trends and in some ways well ahead.

And as far as smartglasses go, Apple just happens to own a leading micro-LED company, LuxVue, so Apple already has a lead on that front as well.

Let's just hope that when Apple finally decides to deliver their smartglasses that they live up to Tim Cook's bravado and not end up being a laggard in the Industry like how Apple TV has been.