On Thanksgiving 2017 the US Patent & Trademark Office published a patent application from Apple that relates to a possible foldable iPhone model. With Samsung and others talking up foldable smartphones, we're seeing more Apple patents surfacing of late covering this theme. One surfaced a year ago covering a bendable smartphone using advanced carbon nanotube structures, which once again today is listed as one of the materials used as an anti-corrosion additive to prevent corrosion of any sensitive structures in the foldable display. Other foldable smartphone patents surfacing in 2017 include these three: one, two and three.

The touch sensor may include layers of optically clear adhesive that is flexible and facilitates bending of the display. The optically clear adhesive may include additives such as water vapor penetration reducing additive, anti-corrosion additive, ultraviolet-light blocking additive, and index-of-refraction adjustment additive. The support layer may be formed from shape memory alloy or amorphous metal and may have openings to facilitate bending of the display along the bend axis. 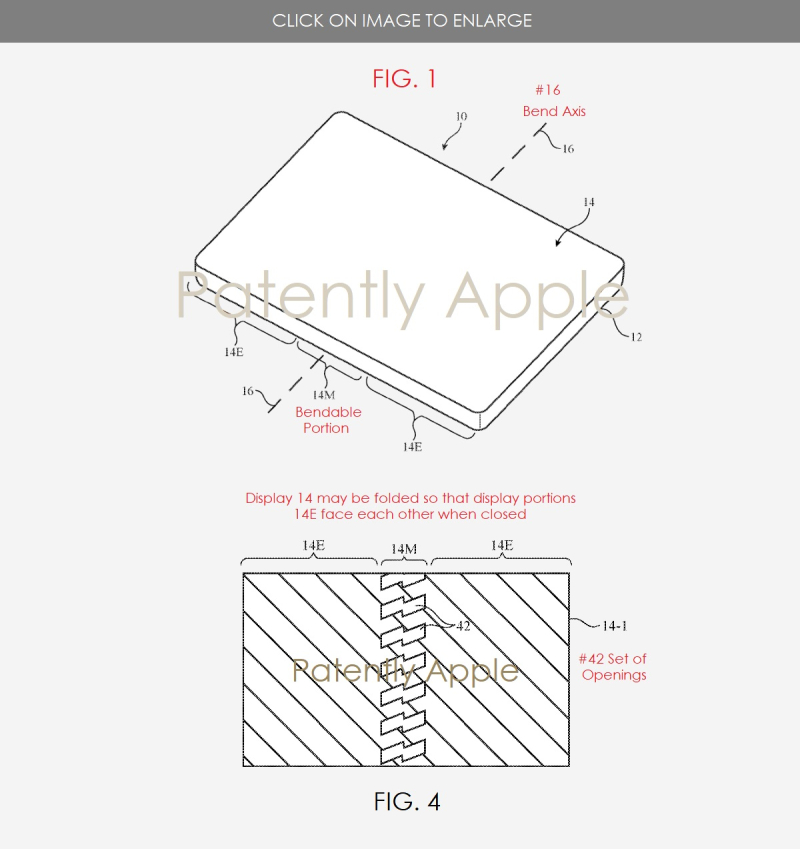 Interestingly it's the first patent by Apple that lists micro-LED as one of the main display types for a foldable iPhone.

Apple's patent also points to liquid metal being used in the structure of the foldable iPhone which is another rarity.

Apple notes that "The material that forms layer 14-1 may be a shape memory alloy (e.g., nickel titanium) or a bulk metal glass (sometimes referred to as amorphous metal)." Bulk metal glass is also liquid metal.

The material that forms layer 14-1 may be a metal matrix composite having an amorphous metal and a reinforcing element, such as carbon fibers, silicon carbide fibers, or boron filaments. Layers 14-1 are illustrated in patent FIG. 4 above.