Home Archives Contact Us Subscribe Twitter Facebook Patently Mobile
Apple Overtook Samsung in the U.S. Smartphone Market in Q3 and is Likely to Slaughter them during the Holiday Quarter
Ex-Apple Store Manager Sues Apple for Age Discrimination and Retaliation for Complaining about a Hostile Environment

Yesterday the vaguest of rumors surfaced that Apple Supplier Catcher has started a new project for a client that could be related to an AR device with some speculating that it translated to smartglasses for Apple. Today a big gun rumor has been published by Bloomberg about Apple's future AR headset.

According to Bloomberg, Apple is targeting an AR headset to be ready by 2020. The new breakthrough devices is expected to be an independent device not requiring an iDevice to power it.

The new headset is expected to have a specialized processor and new operating system likely to be called rOS or arOS.

Apple patents have also described that future smartglasses could work with both Siri and in-air gesturing for controlling the smartglasses.

Patently Apple posted a patent report revealing some the actual work Apple has on record back in July. The team of engineers that were instrumental in the development of ARKit from acquired Metaio are also behind the invention that came to light this past summer. 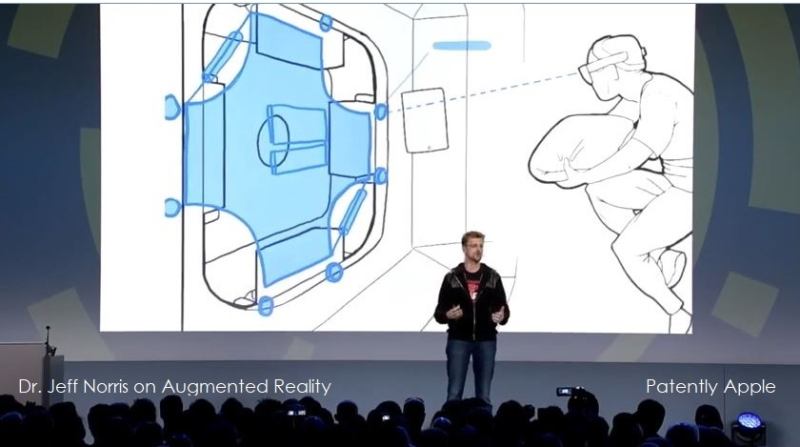 Bloomberg's report is mostly filler with few fresh ideas beyond those noted in our report, but you can check out the full Bloomberg report here.

While it's another weak rumor, we're still far away from the project coming to market, so more information is bound to dribble out over time unless Apple actually cracks down on leakers. Their latest 10K filing warned that leaks could materially hurt the company going forward.

Bloomberg's Gurman is obviously getting the spattering of information from inside Apple somehow so it's up to Apple to figure out how to close that leak, unless of course it's a controlled leak that they don't want to admit to. I'm sure Apple would like to have it both ways.

And lastly, Apple legal has ensured that certain new Apple Trademarks now include "smartglasses" or '3D glasses' and other variants under International Class 009 to legally protect Apple's project. You could check them out here, here and here. So it's not about if Apple will introduce smartglasses in the future, it's just a matter of when.

Patently Apple noted in a report last week about Google patenting the use of micro-LED displays for future AR smartglasses that Apple's CEO told the UK's Independent recently that "today I can tell you the technology itself doesn't exist to do that in a quality way. The display technology required, as well as putting enough stuff around your face – there's huge challenges with that."

So while today's rumor from Bloomberg is hopeful that we'll see Apple smartglasses for 2020, I'm not sure any date could be counted on at this point in time.