Home Archives Contact Us Subscribe Twitter Facebook Patently Mobile
On the Eve of the Apple Watch Debut in 2015, Apple had to Deal with a Major PR Nightmare that Changed their Keynote
While Apple's First-Gen HomePod is set to arrive in 2018, Amazon may Advance Echo with added Pico Projector 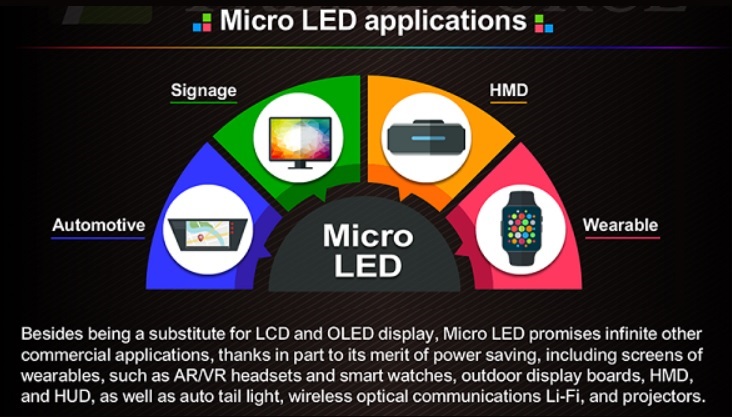 However, the downsizing doesn't translate to Apple giving up the development of related Micro LED technology, said the sources, adding that it could mean that Apple has shifted the R&D focus back the US as the initial phase of the research project being carried out at LuxVue has been completed.

The report further noted that "Apple is working with their main chip partner TSMC to develop applications based on silicon-based backplanes (silicon wafers) aiming to sidestep the bottleneck that entails with the mass transfer of LED chips." A clear sign that the project is progressing.

Apple working with TSMC on this is issue of bottlenecks is significant and flies in the face of half of today's rumor that Apple has hit a wall with issues related to mass transfer of Micro LED chips onto receiver substrates. In fact if anyone has a possible solution, it's Apple's LuxVue.

In a Patently Apple report in September titled "Advances in Micro-LED Displays are being made and Apple's LuxVue owns a Key Patent to Advance Production," LuxVue's competitor PlayNitride had stated at that time that it was LuxVue who owned a patent covering this very issue and how to overcome it. Our September report points to several possible key LuxVue patents PlayNitride may have been referring to.

Apple formed the Micro LED team after it acquired US-based LuxVue Technology in 2014. LuxVue is engaged in development of low-power Micro LED-based displays. Apple did not officially confirm the acquisition of LuxVue.

It's a positive development that TSMC is now involved in the project. Whether a breakthrough is around the corner regarding micro-LED remains unknown but it's safe to say that Apple's competitors are praying that a solution is never found.