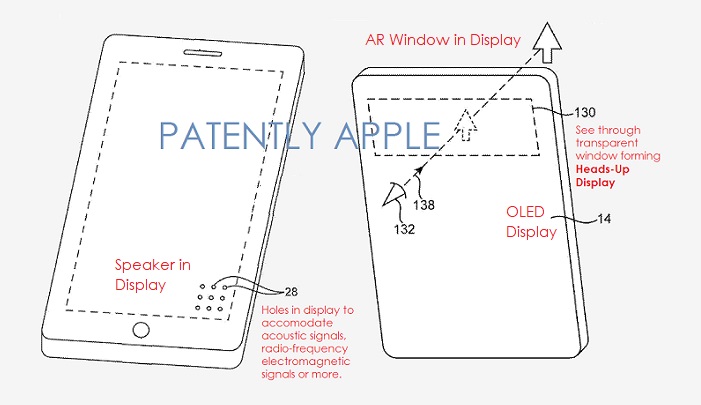 The U.S. Patent and Trademark Office officially published a series of 44 newly granted patents for Apple Inc. today. In our third granted patent report of the day we focus on a single. Apple's granted patent is unique in that it envisions a future iPhone or iPad with a flexible OLED display that integrates speaker grill to form an almost invisible speaker. A second twist to this invention is that it describes what could be a hybrid iPhone display that allows for an upper portion of the display to act as a clear see-through augmented reality window.

Apple's newly granted patent covers their invention relating to OLED displays that are designed to have openings integrated into them as noted in patent FIG. 1 below. The openings could be to accompany a face side camera, light sensor, status indicator light. More notably, the design could support doubling a front facing speaker. 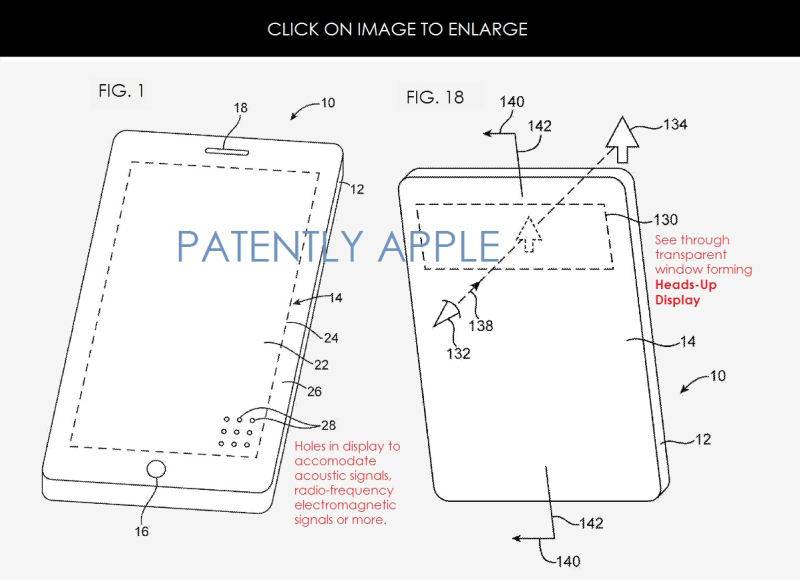 In a similar granted patent issued in 2015 for the same idea we're able to understand the speaker aspect of this design with its superior description as follows: "The flexible display may have an active area that is configured to display images to a user. Speaker membranes may be formed from the active portion of the flexible display. The display-based speaker structures may be driven by transducers that receive an electrical audio signal input from circuitry in the electronic device. Piezoelectric transducers or transducers formed from coils and magnets may be used to drive the display-based speaker structures.

An iPhone with an Augmented Reality Window

Another angle to Apple's granted patent is seen in the iPhone design noted in their patent FIG. 18 above. At the time this patent first came to light, the heads-up display design was a baffling mystery. Why would any user want that feature for?

Now that Apple has introduced their big push into Augmented Reality with iPhone X, the light goes on and you get to see that FIG. 18 is now seen as a hybrid iPhone that supports AR with the top segment of the display being able to be clear to view objects on the backside. In theory it's quite ingenious a concept – though using a backside camera to view objects that could have AR signage associated with objects or buildings makes more sense.

Apple notes that patent FIG. 18 is "a perspective view of an illustrative electronic device having a transparent window region of the type that may be formed from an opening or openings in a display."

Apple further notes that during operation of the iPhone, a user (depicted as viewer #132 of FIG. 18) may view an object such as object #134 (a directing arrow) by looking through window #130 in direction #138.

Display 14 may have display pixels that are located within window 130. These pixels may be activated as a user views object 134 through window 130 to form a heads-up display in which an image is displayed by the display pixels while the external object is simultaneously visible to the user of device 10.

Today's granted patent 9,825,103 was updated as a continuation patent filed back in January 2017. The original patent dates back to 2015. Patently Apple covered another Apple patent back in 2014 that began to describe the display/speaker grill idea. It was originally filed in 2011. 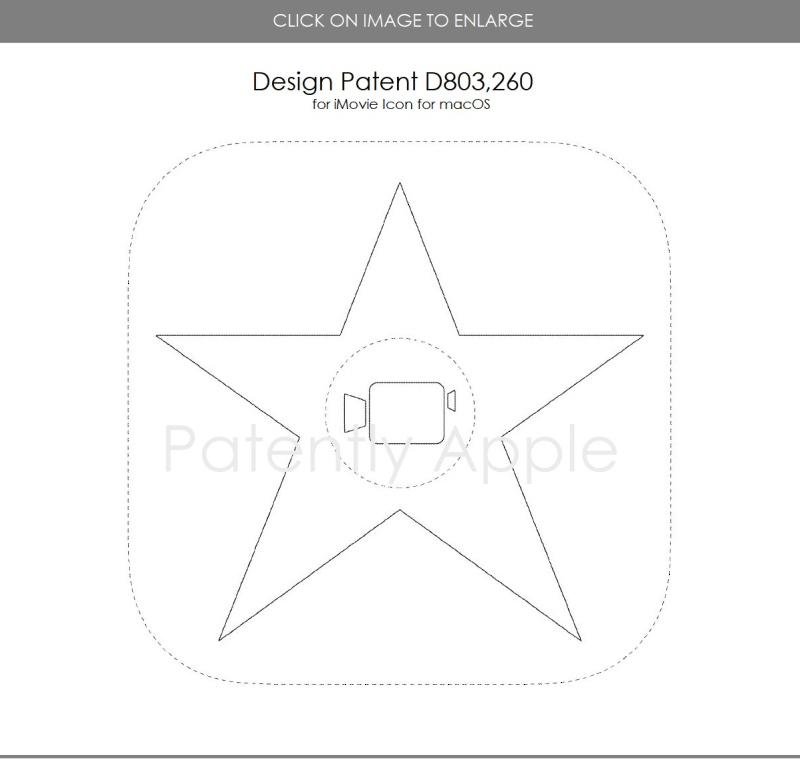