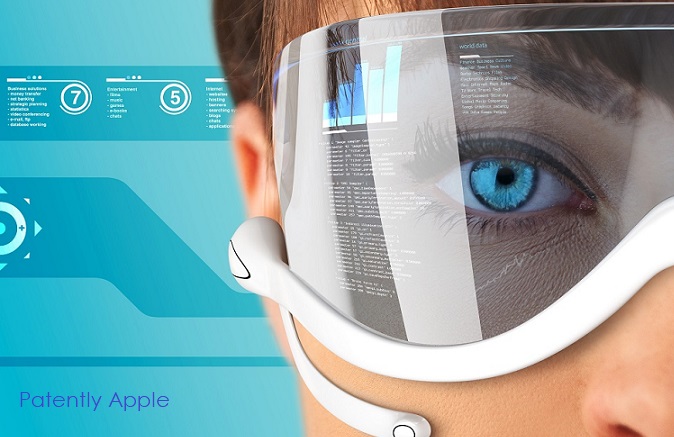 As the saying goes, "when it rains it pours." A week ago Patently Apple posted a report titled "Apple Supplier Catcher Generates Vague Rumor at Earnings Conference about some Kind of AR Device Project," followed by a second report the day after titled "Apple's Future Smartglasses likely to be a Standalone iDevice running on a Custom Processor and more."

Now a new Nikkei Asian Review report is peddling a second vague rumor about Apple's smartglasses project. Are theses Apple suppliers simply trying to ride the buzz wave generated by the iPhone X and Augmented Reality or is there something more to these recent rumors? You be the judge.

To be clear, Apple is never confirmed in the Nikkei report as actually being the client for an AR headset that Quanta is working on. We're to simply to believe that it's Apple, Quanta's largest customer. So unless Apple is getting several suppliers to submit plans for a future headset, we now apparently have Catcher and Quanta both working on an Apple AR headset.

Quanta told the Nikkei Asian Review that "We are working on an AR project and have studied the optical technologies that AR devices have needed since two years ago," Vice Chairman C.C. Leung told the Nikkei and other reporters after the Taiwanese manufacturer's earnings conference. "Currently, we see such a device available in the market no later than the year 2019."

Later the Nikkei reports that "The executive said the proposed AR product of which he is aware will be a "headset-like gadget with a fully transparent lens that allows users to see through and interact with the environment."

Although Leung did not name the device his company is working on, analysts said he is most likely referring to the new AR headset in Apple's pipeline, which is expected to be unveiled as soon as 2019."  So to be clear, it's the analysts assuming it's Apple.

Leung later noted that "if an AR device could carry a price tag lower than $1,000, it would likely become a hit in the market. By contrast, Microsoft's HoloLens headset -- which employs a technology between AR and VR to merge real and virtual world experiences to produce new visualizations -- is currently priced at $3,000."

Quanta Chairman Barry Lam added that "AR devices will likely be first adopted by companies to enhance efficiency and may later become more pervasive in people's daily lives. A lot of big companies are all heading in the direction of developing more AR applications. We are ahead of a lot of people as well." For more, read the full Nikkei Asian Review here.

Once again an AR headset rumor emanates from a financial conference where the company is trying to convince analysts that they have something unique that the other guy doesn't. It's bravado time and not necessarily a truth telling session.

I'm sure Apple makes every supplier sign an NDA and playing games by hinting it's Apple wouldn't be taken kindly by Apple unless they authorized the leak which would be contrary to their abhorrence of leaks and leakers.

In the end, the supplier "rumors" of late are so watered down that they don't have much meat on their bones to sink our teeth into, save for Bloomberg's rumor.