Home Archives Contact Us Subscribe Twitter MeWe Facebook Patently Mobile
Ex-Apple Store Manager Sues Apple for Age Discrimination and Retaliation for Complaining about a Hostile Environment
Apple's iOS 11 is now on 52% of iDevices around the world vs. 0.2% for Android Oreo 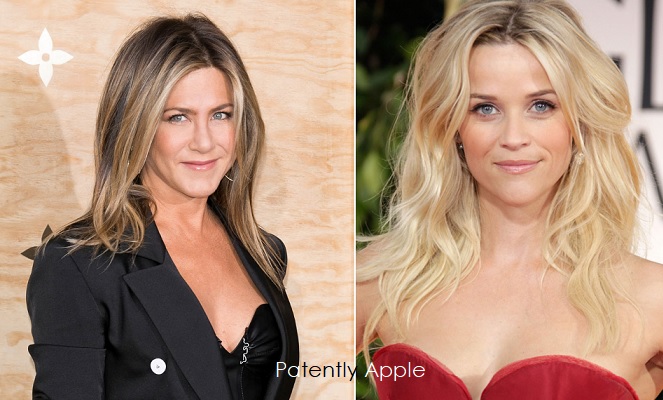 Back in early September Patently Apple posted a report titled "Apple in Talks with Iconic Movie Studio behind such Films as The Matrix and others," wherein we mentioned that one of the high-profile dramas that Apple was vying for was a high-profile drama starring Jennifer Aniston and Reese Witherspoon, set on a morning TV chat show. We're now learning that Apple has secured this series and in fact signed it up for two-seasons.

Apple has announced a major scripted series, winning a bidding war for an untitled drama starring Reese Witherspoon and Jennifer Aniston. The show will focus on the lives of people working in the world of morning television. Apple has given the go-ahead to a two-season order, 20 episodes in total. Witherspoon and Aniston will also produce the show. For more on this, read the full Guardian report here or the one from the Hollywood Reporter here.