Apple Overtook Samsung in the U.S. Smartphone Market in Q3 and is Likely to Slaughter them during the Holiday Quarter In Tim Cook's opening summary statement to kick off their fiscal Q4 financial Conference, Cook touched on the iPhone this way: "iPhone sales exceeded our expectation. In the last week and a half of September we began shipping iPhone 8 and iPhone 8 Plus to customers in more than 50 countries. They instantly became our two most popular iPhone models and have been every week since then.

While iPhone sales exceeded Apple's expectations, the reality is that their shipments were slightly down from Q3 2016 as noted in the Strategy Analytics chart below. However, in context, Apple's iPhone 7 was launched one week earlier last year which explains the slight drop from Q3 2016. 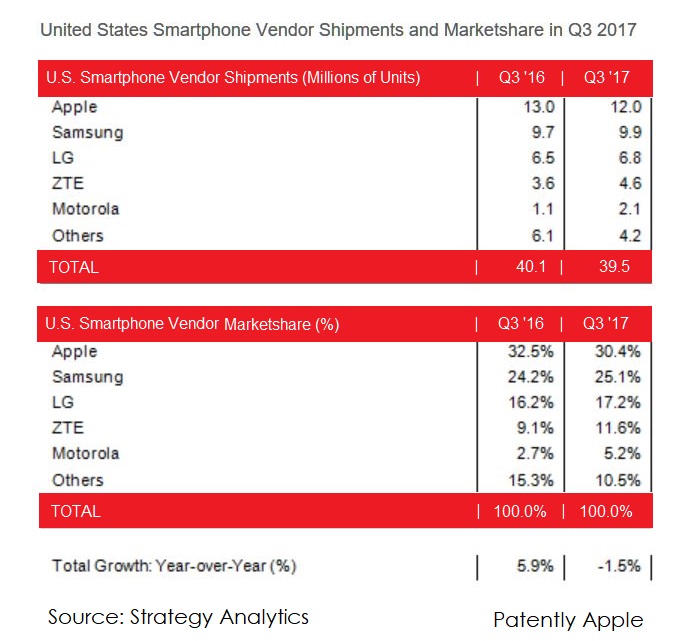 Neil Mawston, Executive Director at Strategy Analytics, added, "We estimate Apple shipped 12.0 million iPhones for 30 percent marketshare in the US in Q3 2017, dipping from 13.0 million units and 32 percent share in Q3 2016. Demand for the new iPhone 8 portfolio was mixed, while some Apple fans delayed purchases in anticipation of the later introduction of iPhone X.

Samsung shipped 9.9 million smartphones for 25 percent share in the US in Q3 2017, up slightly from 24 percent a year ago. Samsung's flagship Galaxy S8 performed relatively well in the high-tier, while its A5 model and others are popular in the mid-tier."

While Motorola is shown to have grown the most in the quarter, they still remain a a near insignificant market player. You could delve into the report deeper if you wish here.

Apple is expected to clobber Samsung during the holiday sales period as the Apple faithful have already pushed the iPhone X to being the largest single product launch in Apple's history hands down which bodes well for the quarter. iPhone mania is back.