While Apple's Current iDevices will Lead Round One of AR, IDC Forecasts AR Headsets will be the Big Story by 2021

While Apple's iOS 11 has ignited the era of Augmented Reality on mobile devices and will be the dominant platform for AR apps early on, the AR/VR headset segment of the market is another matter, according to one of IDC's latest reports.

According to IDC VR headsets are to dominate the consumer market with 90% market share by 2019. At that time IDC, which provides no rational for the shift, sees AR headsets experiencing exponentially growth and overtaking VR headsets. 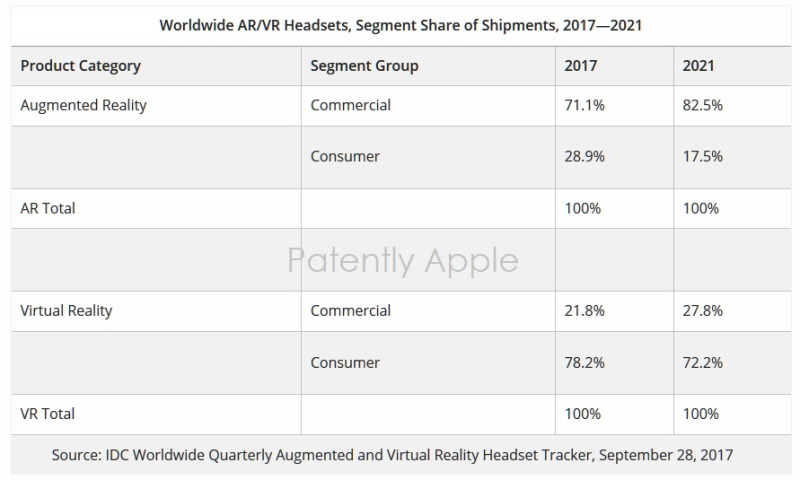 According to IDC's senior research analyst for mobile devices Jitesh Ubrani, "AR headset shipments today are a fraction of where we expect them to be in the next five years, both in terms of volume and functionality."

Ubrani adds that "AR headsets are also on track to account for over $30 billion in revenue by 2021, almost twice that of VR, as most of the AR headsets will carry much higher average selling prices with earlier adopters being the commercial segment. Meanwhile, most consumers will experience AR on mobile devices, although it's only a matter of time before Apple's ARKit- and Google's ARCore-enabled apps make their way into consumer grade headsets."

While AR headsets are poised for long-term growth along with a profound impact on the way businesses and consumers compute, VR headsets will drive a near-term shift in computing. Recent price reductions across all the major platforms, plus new entrants appearing in the next month, should drive growth in the second half of 2017 and will help to offset a slow start to the year.

Recent Patently Apple reports on the topic of AR Glasses from Apple:

Apple is Still Experimenting with Varying Kinds of AR Glasses