While Apple had Teams working on both Touch ID & Facial Recognition, Face ID was Apple's only Choice for iPhone X

Over the weekend Patently Apple posted a report titled "Apple's Customized Gold Alloys Patent for Apple Watch Surfaces, but it's not for a future Gold iPhone XX." I had noted that Apple's patent relating to a gold custom alloy was directly related to the gold variants that were chosen for Apple Watch ranging from US$10,000 all the way up to US$17,000 that failed to impress the rich and famous.

More importantly, even though the patent listed every other product Apple had while omitting the Apple Watch, it was just Apple's way of putting competitors off-balance as to exactly they were working on.

When Steve Jobs introduced the original iPhone, he put up slides showing an iPod with a rotary dial on the face, which was actually an Apple patent filing to throw off the competition prior to iPhone even. It was practical joke.

Over this past summer there were rumors that Apple was struggling to get their displays working with Touch ID under the glass. In that restricted context, Apple's SVP of Hardware Engineering Dan Riccio said that he had heard the rumors but that Apple was focused at all times on delivering Face ID for iPhone X. In other words, for the iPhone X project, Face ID was what they were aiming for and no other methodology from day one. 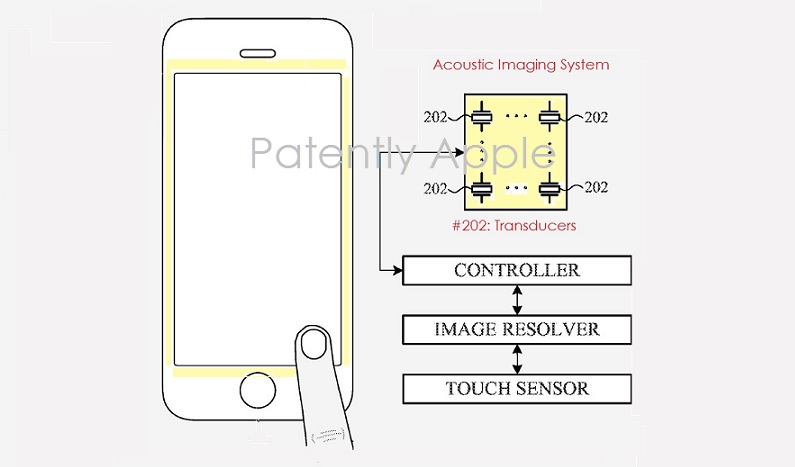 Another report today on this is suggesting that Apple never considered Touch ID under the display glass, as in ever, but that's not the context of the Riccio statement. Technically Touch ID was worked on by dozens of Apple engineers whose names are on the patents we published reports on over the last two years (one, two, three and four).

Like most projects at Apple, they have different teams working on different solutions to a common problem or advanced innovation. At one time Touch ID, evidenced by patents, was on the drawing board just like we posted patent reports on facial recognition (one, two, three and four). This is why over the years Patently Apple hasn't posted crystal ball type of reports just before an event because history has proven that Apple could always zig when most think they'll zag.

Further, just days before iPhone X was to debut they wanted the world to know that they, CrucialTec, had the patent and product ready to ship for displays with touch ID so that Android OEMs could quickly match Apple's new methodology.

The Korea Herald posted the report on September 9. Now all Android OEMs are scrambling to find a way to copycat the Face ID feature with CrucialTec out of luck. For Apple fans it's poetic justice.

With that said, you should check out the TechCrunch report titled "Review: iPhone X" which includes the full interview with Apple's SVP of Hardware Engineering Dan Riccio here. It's an enjoyable read,