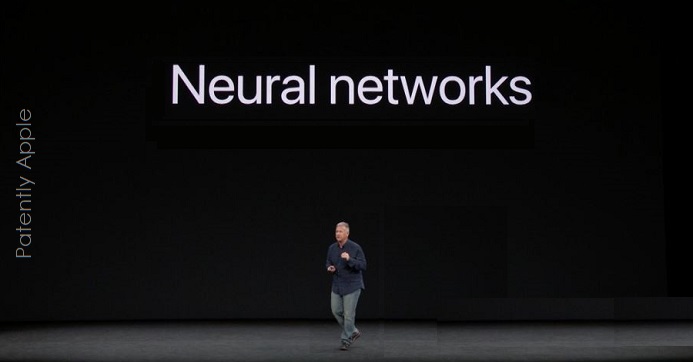 In late September Patently covered a Digitimes report claiming that Apple had outpaced Google on AI with their new iPhone X. That must have angered Google's CEO who had carefully crafted the Google Manifesto last year that self-proclaimed that they were the leaders in AI as if planting a flag on the moon to claim territorial rights of some kind has any real meaning.

It reminded me of Google claiming leadership in AR with Project Tango only to be annihilated by Apple's ARKit in September. Google once again scrambled to rename their project ARCore and put out marketing materials to match Apple's so as to not give Apple an inch. Remember Google Wallet that went nowhere forever and a day and then got crushed by Apple Pay overnight. That was another painful moment for Google who as expected renamed their project what? Google Pay of course, like Samsung Pay. Apple captures the imagination of the market and developers and then the copycats race in to kill Apple on the basis of shear volume of junk phones.

In October Patently Apple posted two reports (one and two) on Google pushing AI and Machine Learning at their Google event on Oct 4th. They tailored their message to ensure that every individual presentation pushed some factoid about their AI and machine learning making their products superior. It was almost obnoxious to hear the repetitiveness of their message. After Apple talked about Neural Networks and their Bionic chips at their iPhone event in September,  Google had to race back to say no-no-no they're the AI leaders.

And how do you get the message out quicker to the market that you're really the bad boy on the block. Well, you have a study pop up just in time to show that surprise, Google is just slightly ahead of Apple today but will crush them by 2022 based on …. Volumes of junk Android phones. It's a metric analysts love even if the profits aren't there. The report on 'Global Artificial Intelligence Technologies Forecast for smartphones was published by Strategy Analytics.

According to the latest research from Strategy Analytics published on October 25th, "one out of every three smartphones sold worldwide this year will use artificial intelligence (AI) to power virtual assistants. But cloud-based AI which powers virtual assistants results in slower response times – On-device machine-learning will significantly speed smartphone AI."

Ville Ukonaho, Senior Analyst at Strategy Analytics, said "Google has a narrow lead in total smartphones sold with onboard virtual assistants in 2017. That lead will only grow as Android smartphone sales, with Google Assistant onboard, continue to expand into lower price tiers." 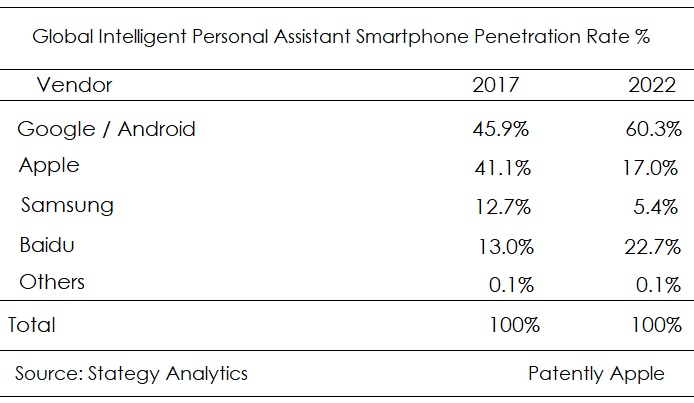 As AI-powered virtual assistants become common across smartphones, the speed with which they are able to accomplish tasks and return results will become key differentiators. AI is at a nascent stage with lots of improvements and lessons to be learned.

One of the major issues for AI powered virtual assistants right now is that very little of the actual computation that powers the assistants is done on the phone itself. According to Ville Ukonaho, "AI is computational intensive and most of the heavy lifting is done in the cloud. This requires a solid data connection, something that isn't always available."

Over the last few years, since the first virtual assistants on smartphones emerged, beginning with Siri on Apple's iPhone, most of the data processing has been done in the cloud, due to the limited processing power of smartphone CPUs. AI applications require huge amounts of data processing, even for small tasks.

Until recently smartphones did not have the computational power to handle this.  However, recent advances in smartphone operating systems and related software and components have brought increased processing power to the newest flagship smartphones."

Earlier this month Patently Apple covered the Huawei event where they launched their highend Mate 10 that introduced the first AI chip for smartphones called the Kirin 970. Apple and TSMC are working on 7nm and 5nm processors that will deliver advanced on device AI and AR solutions. This is one of the areas AI wars will take place, at the chip level going forward.

Lastly, Neil Mawston, Executive Director at Strategy Analytics stated that "By combining software enhancements through machine learning and hardware enhancements in the form of AI engines, we can expect the abilities of virtual assistants to improve significantly over the next several years. This will result in increasingly responsive virtual assistants and more interactive experiences from the devices."

Key questions which still need to be considered include:

Which vendors will drive AI to the all important mid tier?

Which segments or clusters will pay for or value AI features?

How strongly will AI contribute to brand purchase consideration? For how long?

How will AI on smartphones interact with the smart car and smart home use cases?

For the answers to these questions sign up for the Strategy Analytics report here.

At the end of the day leadership in AI shouldn't be based on volumes of cheap Android smartphones and yet that's how its being measured in-part in this report via their chart and commentary.