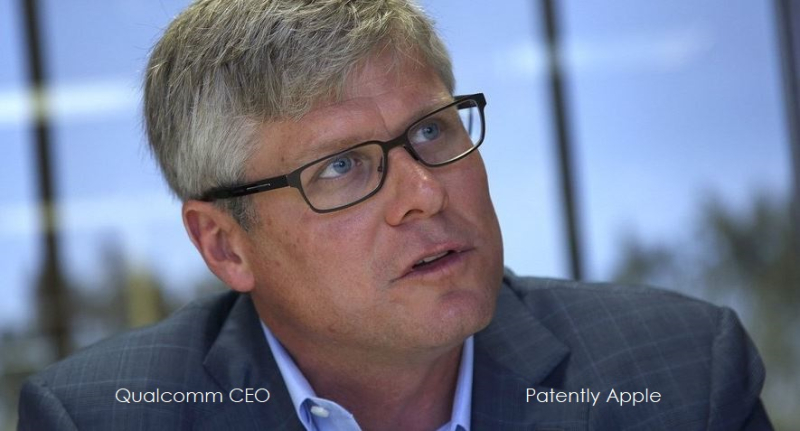 Yesterday Patently Apple posted a report titled "Apple, BMW, Google, Dell, Tesla and others Voice Concern that the EU may adopt Qualcomm's Patent Value System." It's still a mystery as to how the EU even came up with favoring the 'Qualcomm' patent licensing system. Did Qualcomm lobby for that? And isn't it interesting that the Ericsson model is another model the EU is looking at considering that both Qualcomm and Ericsson just happen to be in partnership for Gigabit LTE and 5G technologies? Coincidental you say? Not quite.

Across the world on another front Taiwan's Fair Trade Commission hit Qualcomm with a record $773 million fine for abusing their monopoly power earlier this month. This week Qualcomm's hitman CEO was back in Taiwan for TSMC's 30th anniversary and while he was in Taiwan he used the opportunity to threaten Taiwan businesses economically. The threat is now being amplified by business interests who were working with Qualcomm on big projects. This is exactly why the Fair Trade Commission hit them with a record fine to begin with for abusing their monopoly power.

But now Qualcomm's monopoly power abuse is being turned on the very governmental body that fined them. Do you believe this company?

Qualcomm is declaring war on the Fair Trade Commission and have decided to go nuclear. Qualcomm's CEO knows that if he can't stop the bleeding in fines by governments, their whole business model will melt and for sure their CEO will be sent packing. So Qualcomm's CEO has nothing to lose here by further abusing their monopoly power.

It's being reported today in Taiwan that "While in Taiwan attending the 30th anniversary celebrations of Taiwan Semiconductor Manufacturing Company (TSMC) recently, Qualcomm CEO Steve Mollenkopf also spared time to meet with Taiwan's vice premier Shih Jun-ji to raise his concern over the fine issue, and to exchange views on the possibility of future cooperation between Qualcomm and Taiwan-based players.

Qualcomm plans to take administrative action or seek administrative remedies against the fine, according to officials from the Ministry of Economic Affairs (MOEA) who were present at the meeting.

The officials also said that Mollenkopf has stressed Qualcomm's intention to continue further cooperation with Taiwan's industries, but also hopes Taiwan's administration branch to offer related information to clarify the case during the litigation procedures.

However, Qualcomm has also informed Taiwan's Industrial Technology Research Institute (ITRI), a government-backed organization engaged in applied research and technical services, that it will suspend further negotiations over the 5G collaboration projects between Qualcomm and ITRI.

ITRI said in a statement that it has received a verbal notification from Qualcomm to halt further meetings over 5G cooperation projects.

The announcement of the Qualcomm fine has sparked widespread discussions and concerns about whether it will jeopardize Taiwan's partnerships with Qualcomm on 5G development.

MOEA and FTC do not seem to agree with each on the Qualcomm issue. MOEA said earlier that it was concerned that the fine could create an unfriendly environment for foreign investments and undermine Taiwan's technology development in the long term.

However, the independent FTC stands firm on its decision. Qualcomm's business model has apparently violated the Fair Trade Law, said FTC chairperson Huang Mei-ying during a recent meeting with lawmakers.

If there were no penalty, the Fair Trade Law would be meaningless, Huang told the lawmakers.

Some industry watchers also argued that Taiwan may not necessarily count mainly on Qualcomm on the development of 5G technology since Qualcomm is currently leading in the field of network access and transmission technology for the 5G infrastructure but may not be strong enough in related edge-computing and AI technologies.

However, MOEA believes the cooperation between ITRI and Qualcomm on 5G small cells is important for Taiwan as they will create a lot of derivative applications and tremendous vertical effects on the industry, said Lo Ta-sheng, general director of the MOEA's Department of Industrial Technology."

Qualcomm is putting the squeeze on Taiwan Industry in order to roll back the ruling by the Fair Trade Commission. Although business will be business, Qualcomm appears to be using tactics that you'd expect to see in a mob movie.

This brings us full circle to yesterday's revelations about Silicon Valley being concerned about the Europe Commission choosing the Qualcomm patent model. Out of all the patent models to choose from, the EU is magically leaning toward the two companies that are in cahoots with each other, Qualcomm and Ericsson. Just like Qualcomm and the ITRI in Taiwan.

Did Qualcomm make a similar threat to the EU commission saying that if their model for patent licensing wasn't chosen that the work with Europe's Ericsson would be in jeopardy? Isn't it the same scenario being played out here with just different players?

While Silicon Valley is concerned, I think that they have to get a little more involved than simply sending a letter of concern. Of course we're unaware of what they're doing behind the scenes, but we do know to a large extent that Qualcomm is playing dirty pool with their monopoly power at this very moment.

Apple, of all companies, knows Qualcomm's monopoly abuse all too well with their war with Qualcomm raging on as a very high stakes game. Hopefully Apple legal is deadly focused on this war as it's at an important juncture. If Qualcomm wins on both European and Taiwanese political fronts, Apple's legal war in the courts will all be but toast in the bigger picture.

If you happen to like books on political intrigue, it doesn't get much better than this. Taiwan Industry will soon be at war with their own Fair Trade Commission and it's going to get really nasty, really quick, with Industry and the Ministry of Economics bringing a cannon to a knife fight.

Qualcomm's CEO is rolling the dice here as it's do-or-die time for the Monopolistic CEO. This is the war of wars that he has to win but it's also just as important for Apple and others in Silicon Valley.

So stay tuned, there's bound to be a lot more fireworks to come in the not-too-distant future.