India Temporarily Overtakes U.S. as the 2nd Largest Mobile Phone Market Until iPhones sales Ring in for the holidays This week Canalys published a report titled "India overtakes US to become second largest smartphone market." with shipments growing 23% year on year in Q3 2017 to reach just over 40 million units. India has now overtaken the United States to become the world's second largest smartphone market after China. Samsung and Xiaomi, which shipped 9.4 million and 9.2 million units respectively, accounted for almost half of the total market as the top five vendors continued to post strong growth in Q3 2017.

Once Q4 smartphone sales from Apple, Samsung and others ring in for the holiday season, the U.S. will once again return to being the second largest smartphone market in the world. More importantly, the number one market for premium smartphones.

China and India are still primarily about volume sales with most phones being under US$300 while sales in the U.S. and Canada lean towards premium smartphones over $700.

Patently Apple posted a report in June of this year that Apple took 83.2% of the smartphone industry's profits in Q1 2017 and with the iPhone X this year it's likely to go much higher by June 2018.

Of course in the long run India will no doubt remain the number two market in the world for smartphones, but for now it's a temporary season.

You could read the full Canalys report for details here. The report did mention Apple in one tiny segment by stating that the Indian "premium segment (>₹30,000, +US$465) grew record 3X YoY during Q3 2017 due to the strong performance of Apple, OnePlus & Samsung which grew the overall size of the premium segment. 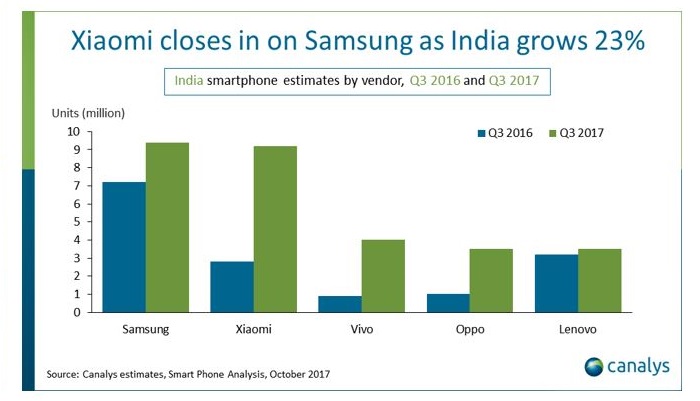 The one notable fact that the Canalys chart above shows us is the tremendous leap in business Xiaomi has taken in the last year. The report notes that Xiaomi grew 290% year over year. Xiaomi opened their first retail store in India in 2017 and has plans for 100 more in the coming two years.

It's not understood why Xiaomi was given the green light to build their first retail store with plans for a hundred more while Apple is still waiting for approval on their first store.

In general, we reported in May that Apple held about 3% of the India market. That means that Qualcomm virtually owns that market for now. That alone should be a motivator for Apple to up their game in India in the coming years.

In May, Apple's CEO commented on India during their Financial Conference call, saying: "We set a new March quarter record for India where revenue grew by strong double digits. We continue to strengthen our local presence across the entire ecosystem and we're very optimistic about our Future in this remarkable country with its very large young and tech-savvy population, fast growing economy and improving 4G infrastructure."

It's obviously a long term move into India that could only be accelerated by the Indian Government working with Apple on several fronts including manufacturing and retail.

Until there's a meaningful breakthrough in the negotiations with the Indian government, Apple will continue to invest heavily in more retails stores around the globe and especially China.

Side Note: Shocker, the Xiaomi Mi 6 marketing team have decided to use light Sex Imagery to appeal to young men or is that just the normal way that females hold their smartphones in China or India? You be the judge.