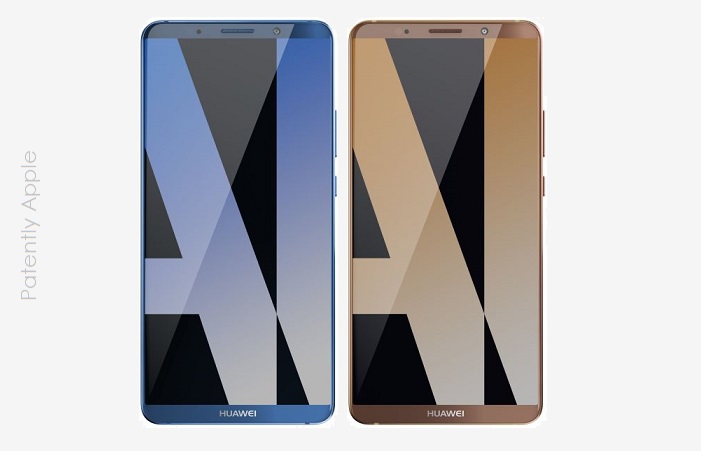 Earlier this morning Patently Apple posted a report titled "IDC Researcher Claims Huawei likely to Overtake Apple in 2018 as new Devices Debut in Germany this Morning." In this report we present you with the full Huawei's Mate 10 event keynote video from Germany. For those interested in knowing more about one of Apple's top competitors, you could watch their Keynote below which begins at the 1 hour mark. The presentation runs about 1.5 hours.

Huawei's high end Mate 10 and Mate 10 Pro launched today along with their special Porsche model, with prices US$826, $945 and $1650 respectively. As noted below, their smartphones are not shown coming to the U.S. though Engadget reported in August that AT&T may be the first U.S. carrier to sell Huawei smartphones. Access to the U.S. market could catapult them to overtake Apple in "volume" as predicted by IDC earlier today. 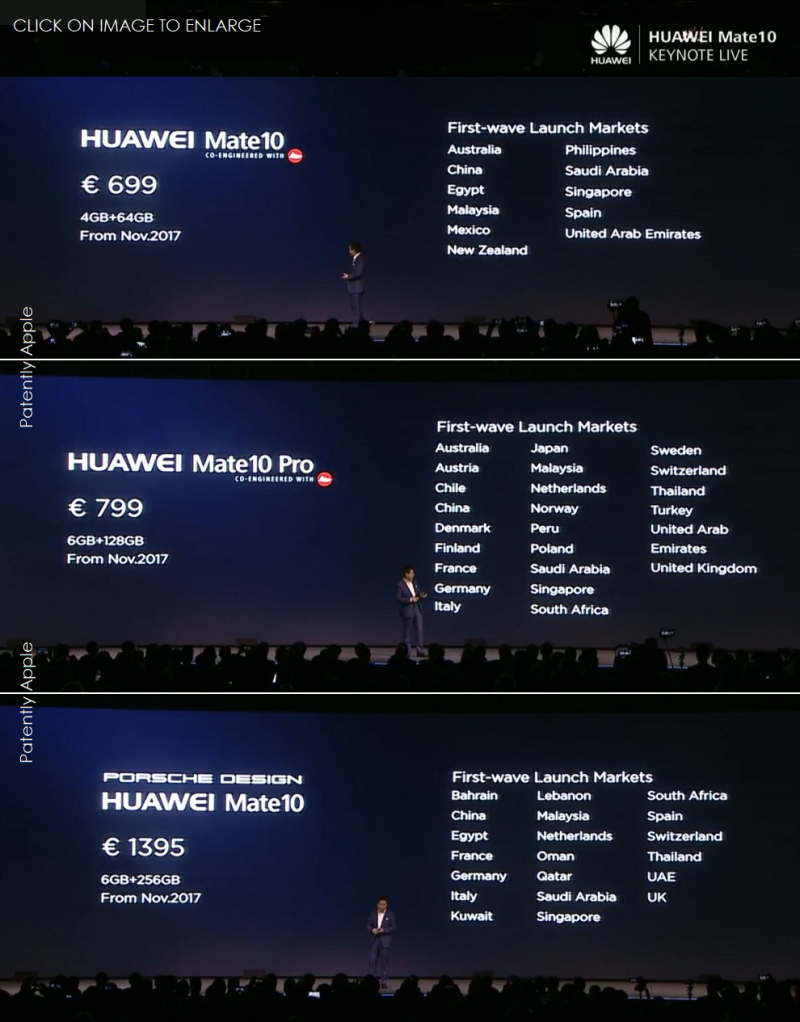 Huawei took every opportunity to put Apple's latest iPhone 8 and iPhone 8 in the poorest light as possible. Laughingly Huawei's CEO was trying to convince their German audience this morning that the Face ID was slow and their fingerprint technology is blindingly fast, much faster than Face ID. Okay, you have to see in the video to see the humor in the CEO making that point, but it was funny. 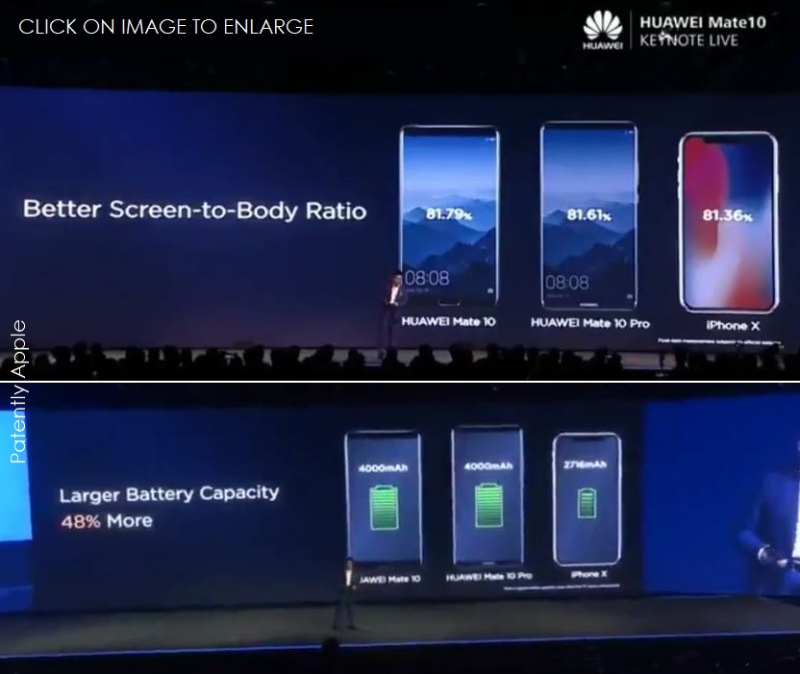 Huawei's CEO went on to mock the iPhone X's top display notch and that iPhone batteries were very poor compared to the new Mate 10 models as noted in the screenshot above.

For a company trying to overtake Apple and Samsung, they should really try to convince their CEO to take a back seat and let professional speakers that are fluent in English make their future presentations. While Huawei's CEO appears to be a very nice man that's personable, his presentation skills are sorely lacking, making it very difficult to appreciate his company's finer points. 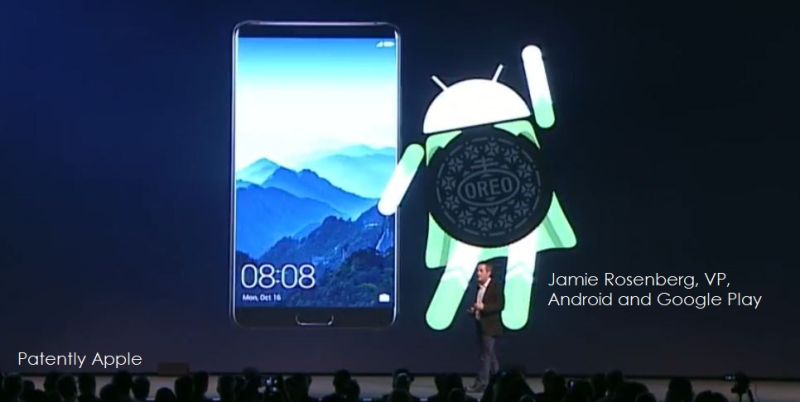 Google's Jamie Rosenberg, VP of Android and Google Play joined the stage at a later stage of the keynote and praised Huawei and their smartphone that introduces a powerful new AI chip, the Kurin 970.

Google's Rosenberg took the opportunity to hammer home the company's new Mantra: The world is shifting from a Mobile First market to an AI First market that Google is leading. 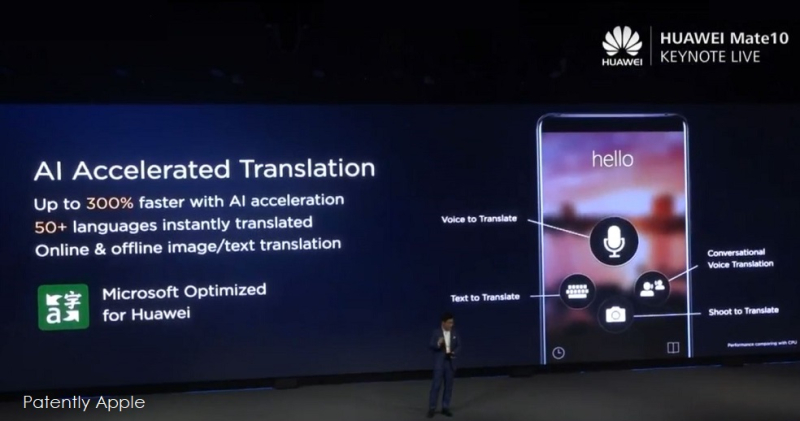 For Samsung executives who are seeing a bleak future at the moment, the Huawei Keynote must have depressed them further. Huawei was only too glad to compare the performance of their new Mate 10 Pro to the Samsung Galaxy S8, sometimes mockingly. It's really Samsung that is going to be challenged by Huawei and more so if AT&T is able to begin selling the Mate 10 in the U.S. in the not too distant future. This will add to Samsung's current nightmare.

While the Mate 10 is Huawei's premium phone, Apple's iPhone X is likely to outsell it handily. In as far as profits go, Apple will win hands down while Huawei will  win in "volume" of smartphones sold over time because they have price points all the way down into the $180 price point which Apple doesn't compete in.

At the end of the day, Huawei's new Mate 10 smartphone line-up is likely to give Samsung a real  headache, especially if they enter the U.S. market for Christmas.

In general it's always good to see what other top smartphone OEMs are up to feature wise. Huawei put a lot of emphasis on fast wireless charging and made it clear their phones were able to charge much, much faster than the iPhone 8. They also introduced a fast charger for the car. So it's these little things you know will work themselves into future iPhones.

Many times Android competitors will try to bring something new to their smartphones so that they can claim to be beating Apple innovation wise and some of the ideas are likely to show up in future iPhones.

For example, the new Mate 10 introduces a dedicated AI processor. Apple is likely to introduce their own advanced AI chip over the next few years once 7nm processors begin to roll out. Though for now their new A11 Bionic chip shows us they're already working towards such a chip in the future.