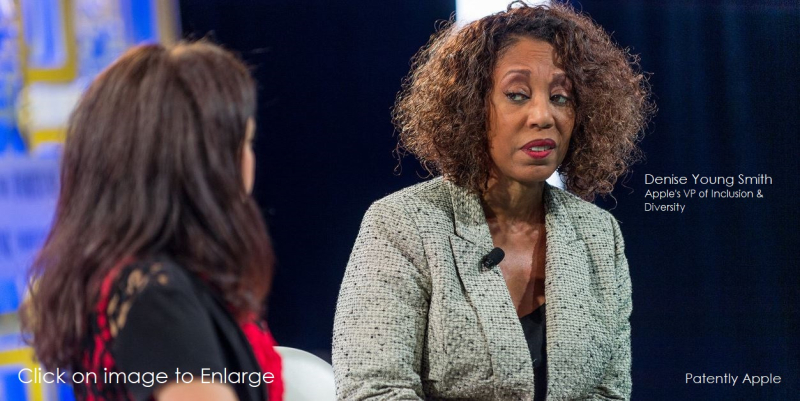 Apple's Denise Young Smith sent an apology to team members at Apple today over comments she made at the One Young World Summit in Bogotá, Colombia, reports TechCrunch.

The focus of the blowback was a segment of Smith's panel that came as a follow on discussion related to an earlier question about whether black women were a priority for her in her role. Because a lot of the resulting discussion on the web has been based on snippets of the conversation, I'll present a chunk of the dialog here, to give more context. I'll bold the bit that seems to have caused the most controversy.

Aamna Mohdin: I wanted to touch on something that you said, Denise, that it's not only just about numbers in Silicon Valley, but you've taken on a new role in Apple for inclusion and diversity, and a lot of that is going to be about the numbers. And I just kind of wanted to know whether black women is a priority for you in this new role?

Denise Young Smith: I'll say this. So first of all, it's a new role, but it's not. I've been black and a woman for a long time…I have been doing this work, I have been playing this role for a very long time. I have been a first, I've been an only, when I was at the same conference that I just referenced, there were numbers and numbers of black women together — successful, professional, astonishing black women, and we were sharing stories and every single one of us could share the same stories about being in a room, in a meeting and someone would assume you were the assistant, the secretary, that you were not the manager, you were not the boss and that your staff person that was three levels below you was your boss. We all shared those stories.

Denise Young Smith: Aamna, you also asked me about my work at Apple, or in particular, who do I focus on? I focus on everyone. Diversity is the human experience. I get a little bit frustrated when diversity or the term diversity is tagged to the people of color or the women or the LGBT or whatever because that means they're carrying that around…because that means that we are carrying that around on our foreheads.

And I've often told people a story– there can be 12 white blue-eyed blonde men in a room and they are going to be diverse too because they're going to bring a different life experience and life perspective to the conversation. The issue is representation and mix and bringing all the voices into the room that can contribute to the outcome of any situation. So I focus on everyone, but I also focus on allies and alliances because to DeRay's point, there's an incredible amount of power in those who have platforms or those who have the benefit of greater representation to tell the stories of those who do not. So whenever we can accomplish that, then that is a win for everyone. And I think that is something that people, that we all tend to… particularly those who protest things that we are fearful about, we can all win in this story, and so that's what I try to focus on at Apple." Read more about this story here.

Two thumbs up for Apple's Denise Young Smith for being refreshingly honest and two thumbs down for bowing to political correctness.