A division of ABI Research published a report earlier this month which stated that companies adopting OLED displays are doing so to promote virtual and augmented reality applications because users are able to experience more realistic and lively images with faster response time, richer color and higher contrast ratio comparing to LCD.

Yesterday Patently Apple posted a report about Tim Cook being interviewed by BuzzFeed's Nicole Nguyen and Cook stated this about AR:

In June when talking to Businessweek about AR, Apple's CEO told them the thought it will be profound. "I am so excited about it, I just want to yell out and scream. The first step in making it a mainstream kind of experience is to put it in the operating system. We're building it into iOS 11, opening it to ­developers—and unleashing the creativity of millions of people. Even we can't predict what's going to come out."

Apple loves to focus on the customer experience when designing their hardware and software in unison. It's the Apple signature. And so it's easy to see that Apple wanted to not only focus on delivering a new AR platform, but also one backed by the best visuals available which translated to delivering custom enhanced OLED displays.

This month's research report by ABI added that "OLED displays for virtual and augmented reality have been widely used in all industries including games, advertising, and education, and related applications have recently been actively pursued. 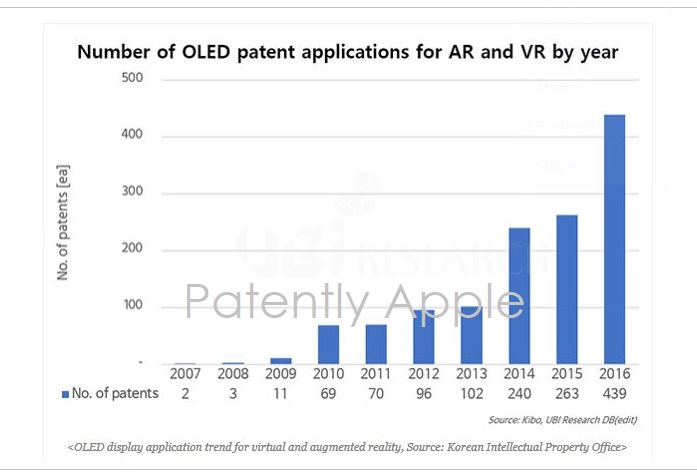 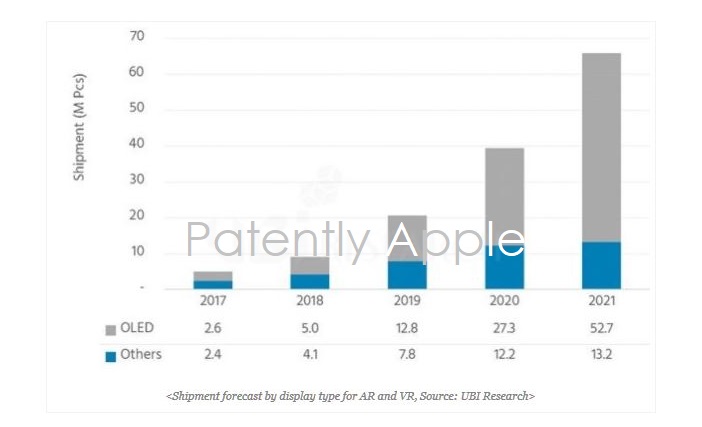 Applications for these kinds of displays by major application companies include 465 filings by LG Electronics, 216 by Samsung Electronics, 51 by Microsoft Corporation, 29 by Samsung Display, 20 by SK Planet, 17 by Qualcomm and 17 by LG Display.

Although the report failed to mention Apple, you could check out our archives on different kinds of future displays that Apple has filed patents for.

Finally, the report notes that specific OLED display applications for specific fields of virtual and augmented reality applications include: 426 cases of personal entertainment (game, theme park, experience); 169 cases of defense (war simulation, weapons development, fighter pilot); 141 cases of advertisement; 131 cases of medical treatment (3D simulation, virtual endoscopy, simulation); 123 cases of healthcare and 117 for movies. The majority of applications, according the study, indicate that OLED display technologies for virtual and augmented reality are most actively used in the game and defense industries.

The medical field is likely a future focus for Apple regarding OLED displays. Apple's focus of late has been all-things-health for Apple Watch including heart studies and so with Apple's new iMac Pro launching later in the quarter, Apple is aiming to meet the needs of developers at the very high end of the market who are working on real-time 3D animation, AR and VR applications as well as advanced health studies and related imagery. Once OLED suppliers are up to speed, we're likely to see Apple shift to OLED for future Macs as well.

Though at the end of the day, the driver for Apple to shift iPhone displays from LCD to OLED iPhones in the short run was, as the report in-part suggests, to support ARKit for AR applications and games so that they could claim to have the largest AR platform in-the-making.

And as we noted at the top of our report users will be able to experience more realistic and lively images with faster response times, richer color and higher contrast ratio when playing games and other applications on an iPhone X versus an LCD based iPhone. As Apple now markets: iPhone X – Say hello to the future. And the future begins on November third.