Apple's CEO didn't push back when France's President Read him the Riot Act on Taxes, and here's why 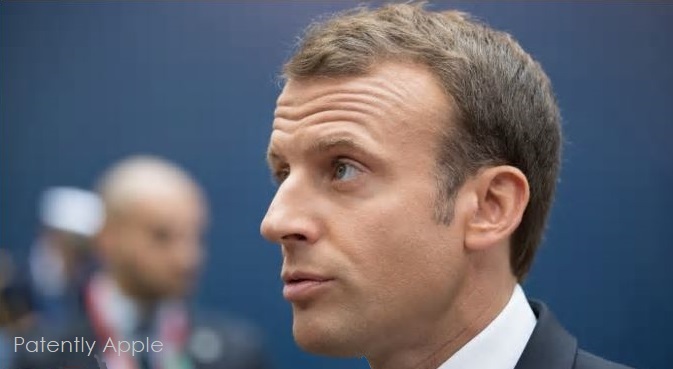 Earlier this month Patently Apple posted a report titled "Tim Cook's meeting with French President Macron was relatively brief and to the Point about future Taxes." The report noted that French officials had stated that Apple's CEO Tim Cook didn't push back against calls by the French president and European allies to change rules in the region to get technology giants to pay more taxes. Today a new report has surfaced that may explain why Cook stayed quite while French President Macron read him the riot act on taxes.

A Financial Times report published late yesterday revealed that "French president Emmanuel Macron was put in check on Thursday in his ambition to secure rapid EU agreement on a new revenue tax for US tech giants, after Ireland and Luxembourg warned that Europe should not disrupt discussions under way at global level. Irish prime minister Leo Varadkar and Luxembourg's leader Xavier Bettel, argued that the EU should not go it alone in introducing new measures.

While Macron's tax plan, that's designed to punish the likes of Apple, Google and other Silicon Valley companies, won early support in September from powerful allies such as Germany, Italy and Spain for the turnover tax plan, which would target companies' revenues instead of profits, some other EU countries have emerged in recent weeks as staunch opponents. Paris needed unanimity to push through any new tax plan.

The exchange between the two competing factions is an early indication of the difficulties that Mr Macron is set to face in pushing his ambitious agenda of European reform, given that very different economic philosophies and priorities at play in different EU countries. The problem is likely to be especially acute in the area of taxation, where unanimous support of national governments is needed to adopt new initiatives.

Brussels, the de facto capital of the European Union, argues that such a broad overhaul of rules is the best way to impose heavier taxes on large tech companies."

Obviously Apple's CEO knew of Ireland's opposition to Macron's tax plan that could put a dent in the plan getting approved. While some form of tax on Silicon Valley companies will likely emerge over time, it may not be as severe as France's President would like.

For more on this subject you could read a September 27th report published by Bloomberg titled "Macron's Grand Ideas Will Be Shot Down, One by One."