Patently Apple posted an Apple patent application report a year ago titled "Apple Reinvents the Watch Band with Auto Adjustment+." Today the U.S. Patent and Trademark Office officially granted Apple Inc. this patent. The invention will allow owners of a future Apple Watch to dynamically adjust the fit of their watch band through a simple automated system. The perfect fit will be achieved for your leisurely times or when you crank up your workout and need your watch band to hug your wrist like its one with you as you move. It will even assist users to take their pulse by tightening the band to perfection to get that biometric reading just where it has to be and then automatically back off so as to not choke the circulation to your wrist. It's about taking the Apple Watch experience to the next level where it'll further separate itself from the competition's toys. It's not just about giving the Apple Watch bands some smarts – it's about giving the Apple Watch bands some attitude that only comes from being the best. 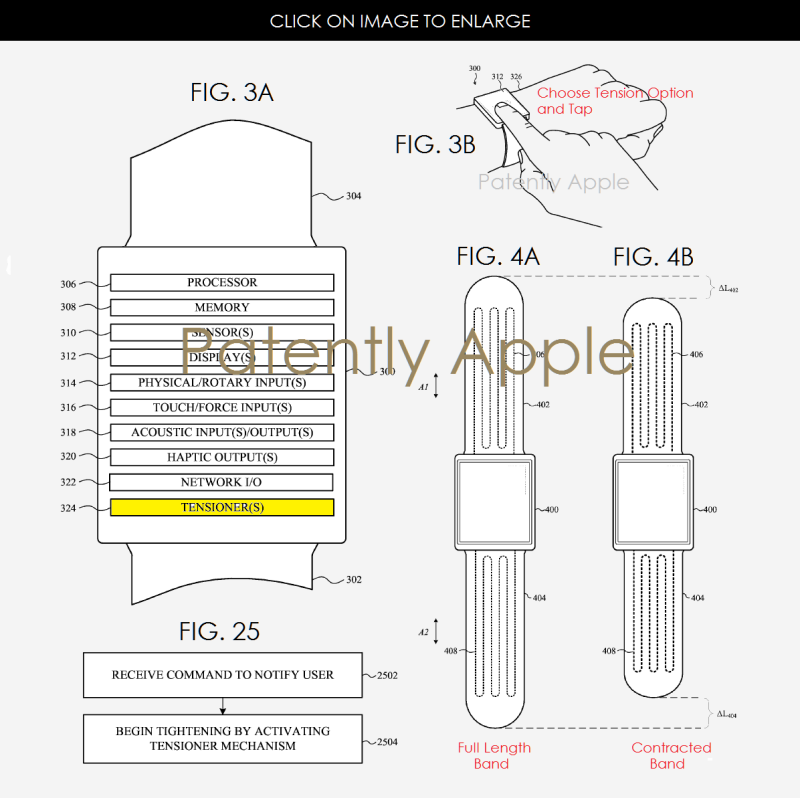 Apple's patent FIG. 3A presented below depicts a simplified block diagram of a wearable electronic device and its various components; FIG. 3B depicts an owner of a future Apple Watch choosing an instruction that will automatically adjust the fit of the watch band; FIG. 4A depicts a top plan view of an example Apple Watch with a two-piece band system configured to contract along its length in response to an electrical signal from a tensioner; and FIG. 4B depicts a top plan view of the example wearable electronic device of FIG. 4A, showing the two-piece band system in a contracted configuration.

For more details and graphics, see our original 2016 report here. Apple's granted patent 9,781,984 was originally filed in Q2 2017 and published today by the US Patent and Trademark Office.