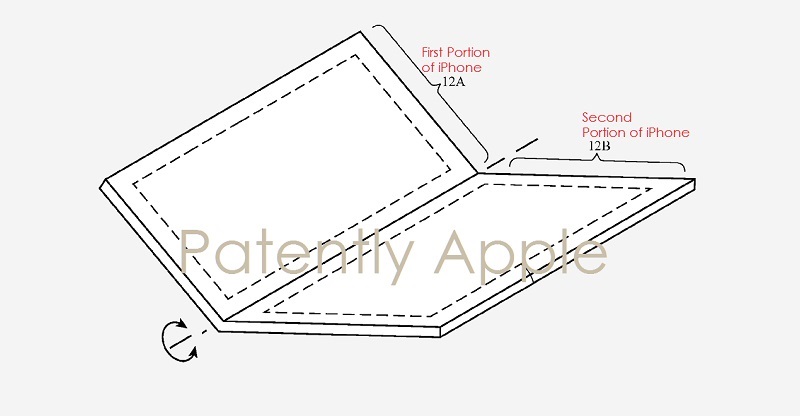 In January Patently Apple posted a report titled "Apple's Third Major Folding iPhone Invention has come to Light Illustrating a Dual Fold-Out/Fold-In Form Factor." Our archives provide an overview of Apple's work in this area of future iDevices that could bend or fold.

Today the US Patent & Trademark Office published another patent application from Apple relating to future folding iDevices titled "Electronic Devices with Displays." The timing of Apple's latest patent filing being made public is interesting in light of a report that Patently Apple was first to report on yesterday titled "A New Rumor Surfaces in South Korea claiming that Apple and LG are collaborating on a future Foldable iPhone."

The housing and the flexible display may have edge portions that are joined along a flexible middle portion. The flexible middle portion may overlap a bend axis. The housing and flexible display may be bent about the bend axis. Flexibility enhancement regions may be formed in a backing layer, polarizer layer, a display layer such as an organic-light-emitting display layer or micro-light-emitting diode display layer, and may be formed in adhesive layers and other layers within the display to enhance bending about the bend axis.

Apple notes in their filing that "Display #14 as noted below may have one or more portions that bend. The bent portions may be flexed back and forth during use of device 10 (e.g., when device #10 is being opened and closed like a book) or may be placed in a permanent bent configuration (e.g., when an inactive portion of display is bent to accommodate mounting in a compact housing). 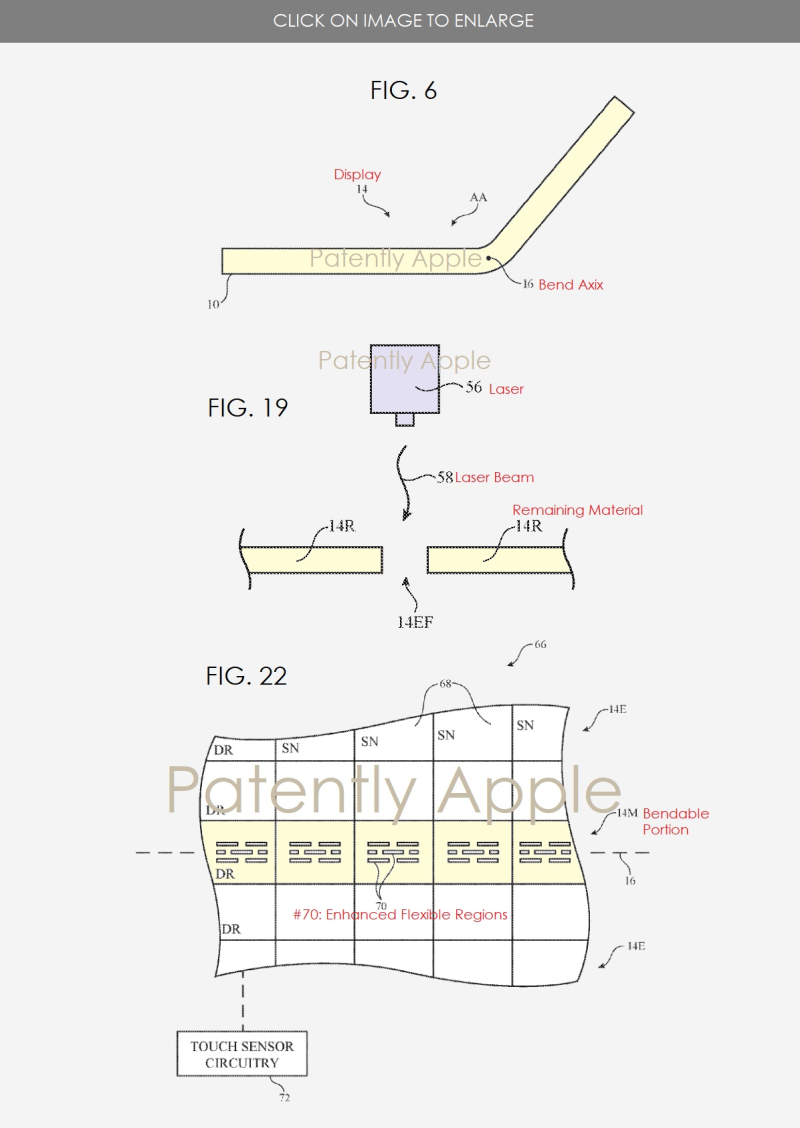 Apple's patent FIG. 6 is a side view of an illustrative display with a bend in an active area of the display; FIG. 19 is a diagram showing how material removal techniques such as laser drilling techniques may be used in forming a display with enhanced flexibility regions; FIG. 22 is a diagram showing how a touch sensor may be provided with enhanced flexibility regions.

Apple points to the invention applying to the iPhone, iPad and possibly a futuristic MacBook or notebook-styled device. The patent states that the invention could apply to LCD, OLED and Micro-LED. Apple acquired LuxVue in 2014 that specialized in Micro-LED technology.

Patently Apple posted a report last week titled "ZTE to Beat Samsung to Market with a Folding Booklet Styled Smartphone later this Month." While it may not be the slickest smartphone design, China based ZTE that will bring the first commercially viable dual display based folding smartphone to market.

There are two types of folding smartphones. The first style presents users with two separate displays that fold over like a book. The second style, which both Apple and Samsung have patents on, allows a single display to bend in half like a book, just as Apple points to in this invention.