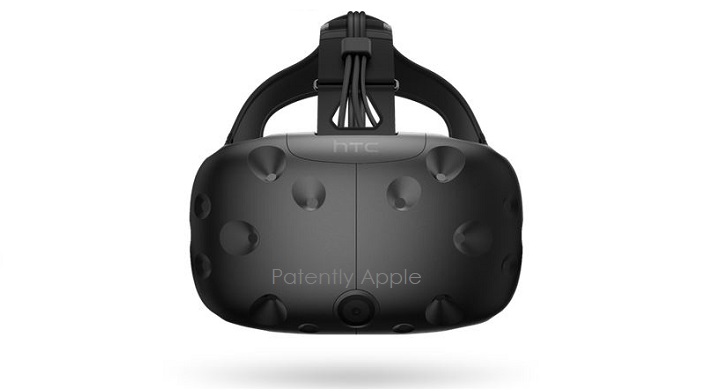 While Apple's CEO told the UK's Independent yesterday that Augmented Realty 'Glasses' are years away. AR glasses are a different type of invention and not to be confused with a Virtual Reality Headset that could be used for a different kind of experience. Apple hired Jeff Norris earlier this year who worked at NASA's Jet Propulsion Lab where he worked on both Virtual and Augmented Reality projects. His team worked with Facebook's Oculus (Virtual Reality), Microsoft's HoloLens (Mixed Reality) and the HTC Vive which Apple promotes on their iMac web page as noted below. Apple states that the new iMacs have the power to create cutting-edge VR content for 3D VR headsets like the HTC Vive. 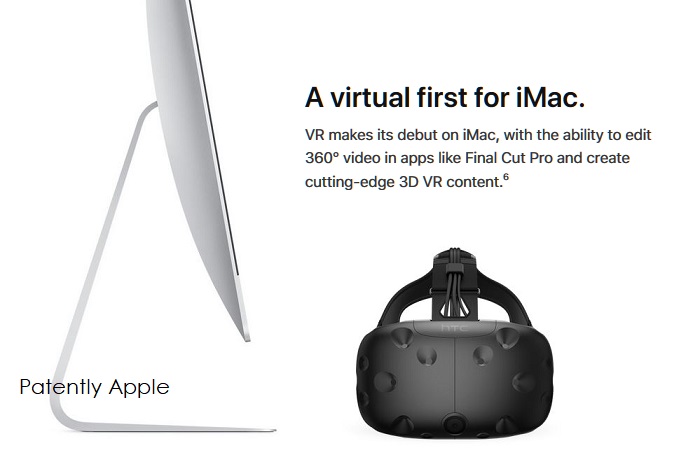 Today the US Patent & Trademark Office published a patent application from Apple that relates to monoscopic (1 view) or stereoscopic (2 view) 180 degree (hemisphere) or 360 degree (full sphere) photography and post-production for distribution to dome, mobile or head-mounted display virtual reality applications.

Conventional 180 degree or 360 degree video and/or images are stored in flat storage formats using equirectangular or cubic projections to represent spherical space. If these videos and/or images are edited in conventional editing or graphics applications, it is difficult for the user to interpret the experience of the final result when the video or images are distributed and presented in a dome projection, cubic, or mapped spherically within a virtual reality head-mounted display. Editing and manipulating such images in these flat projections requires special skill and much trial and error.

Apple's invention is generally directed to methods and systems for transmitting monoscopic or stereoscopic 180 degree or 360 degree still or video images from a host editing or visual effects software program as equirectangular projection, or other spherical projection, to the input of a simultaneously running software program on the same device that can continuously acquire the orientation and position data from a wired or wirelessly connected head-mounted display's orientation sensors, and simultaneously render a representative monoscopic or stereoscopic view of that orientation to the head mounted display, in real time. Apple's patent FIG. 5 shown above illustrates an example for presenting a preview image by a 3D display device. FIG. 5 illustrates the user interface of a video or image editing or graphics manipulation software program #501 with an equirectangularly projected spherical image displayed in the canvas #502 and a compositing or editing timeline #503.

The image output of the video or image editing or graphics manipulation software program can be output via a video output processing software plugin module #504 and passed to a GPU image buffer shared memory and then passed efficiently to the image receiver #507 of the head-mounted display processing program #506.

Additionally, since wearing a head-mounted display will obscure the wearer's view of the UI of the video or image editing or graphics manipulation software program, it is also possible to capture the computer display's user interface as an image using a screen image capture software program module #512 and pass it to an image receiver/processor #513 for cropping an scaling before being composited on the left and right eye renders from the 3D image processing routine #508, #514, #515 and then the composited image can be passed to the connected head-mounted display #511 for immediate presentation to the wearer within the head-mounted display. 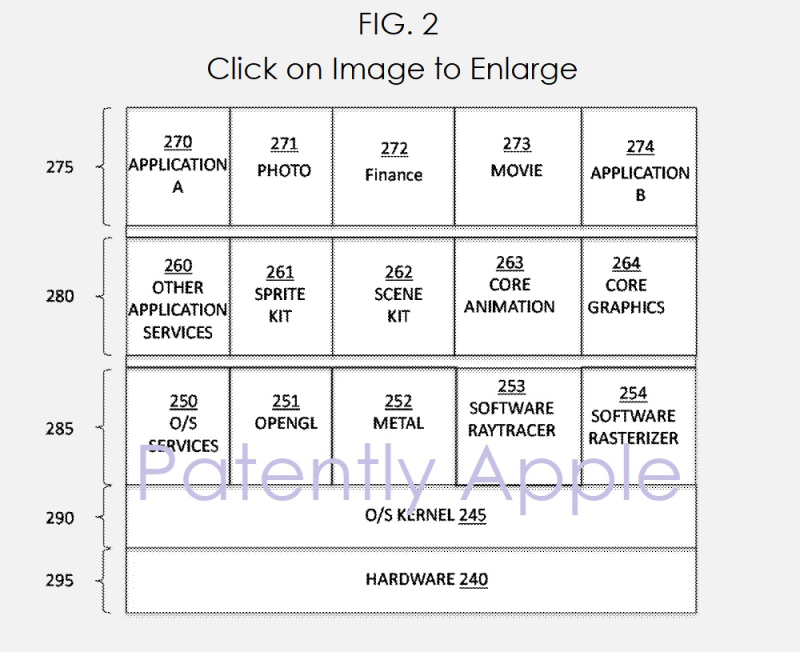 A description of common computing software architecture is provided and expressed in a layer diagram in FIG. 2. Like the hardware examples, the software architecture discussed here is not intended to be exclusive in any way, but rather to be illustrative. This is especially true for layer-type diagrams, which software developers tend to express in somewhat differing ways.

Apple states in their patent filing that "it may be useful to note that Metal #252 represents a published framework/library of Apple Inc. that is known to developers in the art. Furthermore, OpenGL #251 may represent a framework/library present in versions of software either currently or formerly distributed by Apple Inc. 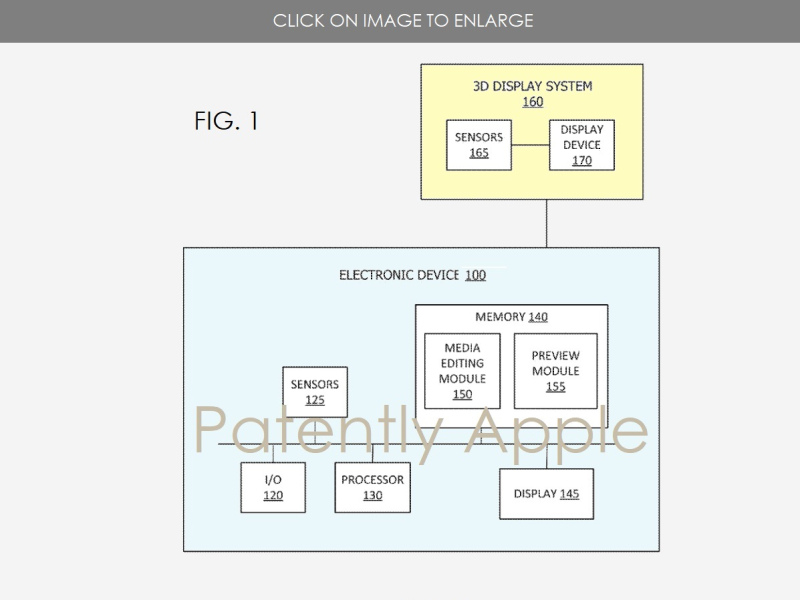 Apple's patent FIG. 1 illustrates a simple flow chart noting that electronic device #100 may be part of a multifunctional device, such as a mobile phone, laptop computer, tablet computer, personal digital assistant, portable music/video player, or any other similar electronic device. According to one or more embodiments, the electronic device may be coupled to a 3D display system #160, either wired or wirelessly.

Apple's patent FIG. 3 presented below illustrates a flowchart form, a method for presenting a preview image by a 3D display device. 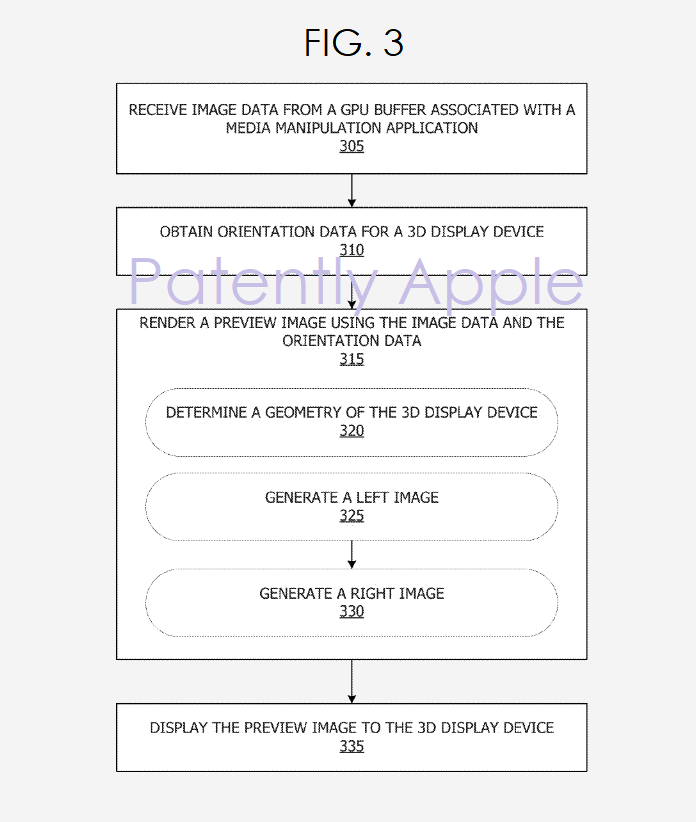