Apple Continues to be one of the top 15 Tech Companies Granted Patents by the U.S. Patent Office 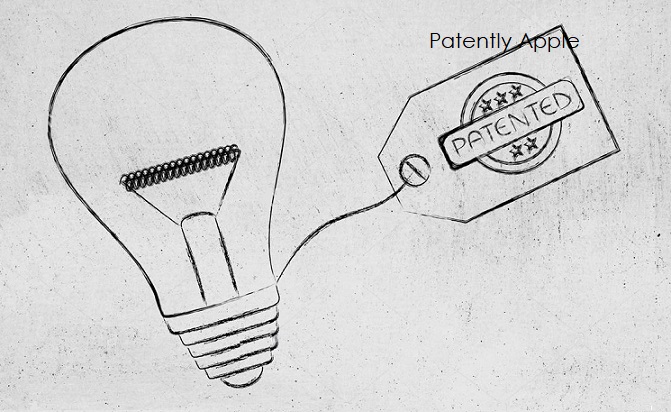 Patently Apple had posted reports covering the companies that have received the most granted patents for 2014 and 2015. Somehow we missed covering the 2016 stats report filed in January and so as a matter of record we want to stay on top of these statistics because they provide us with a snapshot of leading tech company IP activities and trends.

For the 24th consecutive year IBM was the leading company who received the most granted patents in the U.S. with 8,088. Samsung Electronics was second with 5,518, though if you combine their number with Samsung Display their total would be 7,541 granted patents.

Apple was in the eleventh spot for 2016 with 2,102 granted patents which is the most in the last three years. Apple has held the eleventh spot since 2014. Other Silicon Valley companies that are listed ahead of Apple in the top 15 include Qualcomm, Google, Intel and Microsoft as noted in the list below. 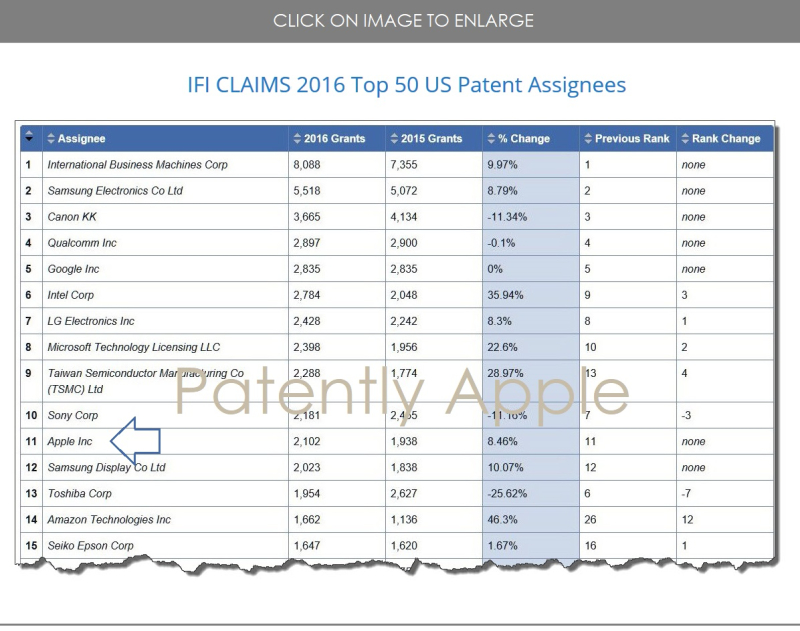 "Fueled by IBM and a host of West Coast tech companies, the U.S. saw patent increases from 10 of its 17 firms on the list including Amazon, Apple, AT&T, Boeing, Cisco, Ford, IBM, Intel, Microsoft and Texas Instruments.

All of the patents generated by the IFI CLAIMS Top 50 are attributable to just 11 countries. The U.S. holds 41 percent of those patent counts followed by Japan at 28 percent; South Korea at 15 percent; Taiwan at 4 percent; Germany at 2.6 percent and China at 2.5 percent. Asian companies now represent 50 percent of the total Top 50. 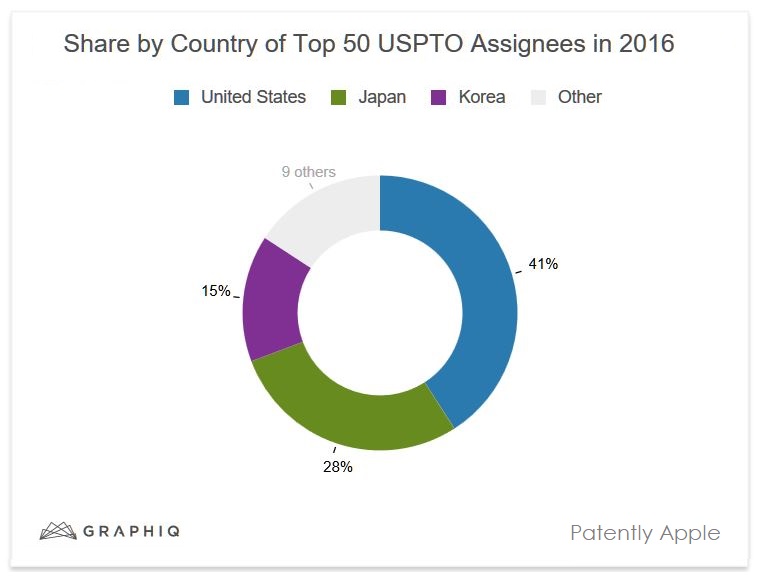 At the top of this report I pointed to following IP trends as one of the reasons Patently Apple likes to follow these annual IP reports. One trend that the 'IFI CLAIMS' report pointed to above is that Huawei Technologies number of granted patents leapt by 50% in 2016. The trend in IP supports the news of Huawei's rise in the smartphone world's rankings.

Apple and others are racing to put dedicated AI processors into their respective smartphones so as to speed up AI processes dramatically from today's cloud based AI solutions. In Huawei's keynote this month they hammered home their advances on this front. So their patent activity confirms their work to advance their smartphones is in correlation to their rise in the market by offering advanced features their competitors can't match this year.

Huawei's only holdback is still having problems entering the U.S. market. In 2014 the LA Times wrote a report titled "Suspicions keep Chinese telecom firm Huawei out of U.S. market."

The report noted that "What's holding Huawei back is the conviction in Washington that the company has undisclosed connections with the Chinese government, and suspicions that Huawei equipment could surreptitiously harbor software to facilitate cyberwarfare, including espionage or network disruption. Huawei denies both assertions."

There was a rumor that AT&T would be selling the new Mate 10, but we've yet to see it materializes. Their popularity around the world will guarantee a following in the U.S. and that will be bad news for Samsung and other Android vendors.

Trends aren't always visible or understandable, but in the case of Huawei it was clearest. Another company having more IP activity in 2016 was Intel who is in the process of transitioning away from just focusing on computers to new markets like AI, autonomous vehicles and other areas. Microsoft's rise in IP activity directly correlates to delivering new hardware products and their dramatic rise in Azure cloud computing market gains.

Even TSMC's rise in IP makes sense being that they're pushing harder then ever to stay on top of their market by opening new plants and R&D centers focused on delivering next-gen 7nm, 5nm and 3nm processors in order to keep Apple's business and stay ahead of Samsung as noted in this report.

In the end this is why we like to follow IP trends as it provides all of us a tiny window into the companies that are driving tech market trends forward. To review some of Apple's most prominent new ideas for future products you could always check out our reports in our Patent Application archive or check out our Granted Patent Archive to review inventions and ideas that Apple now legally owns. In January 2018 we'll be posted the stats for granted patents issued in 2017.