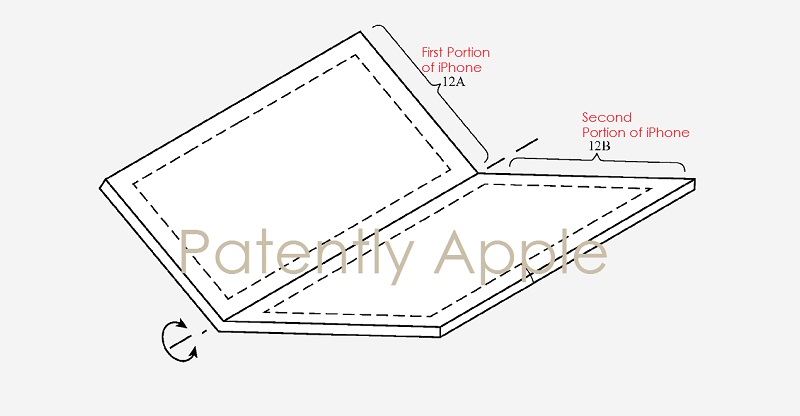 Patently Apple posted a report back in December 2016 titled "Korean Report Wildly Speculates that LG is Working with Apple, Google & Microsoft to Deliver Foldable Devices by 2018." Will we actually see a folding smartphone from Apple next year? Likely not, but that doesn't stop the rumor mill in Korea from expanding on that original rumor. Today we're learning that "Apple has reportedly started working on a foldable iPhone with LG Display, not Samsung Display -- the sole OLED supplier -- possibly due to concerns over tech leaks to its archrival Samsung Electronics.

In a new report published today by the Korea Herald, they noted that Sources told The Bell that "LG Display recently created a task force to develop a foldable OLED screen for the new iPhone model, while its parts-making sister firm LG Innotek has also setup a team dedicated to developing the rigid flexible printed circuit board, more widely called RFPCB.

Citing unnamed industry sources, the report said, the panel production could start from 2020, which means Apple could delay its phone launch compared to Samsung's first foldable phone that is likely to debut next year."

The report further noted that "Apple usually starts a new phone project a year before launch, sharing key features, including the panel, with suppliers. LG reportedly completed its own foldable OLED panel prototype two to three years ago and has been upgrading the durability and the yield rate.

LG has recently started its first OLED production for phones at its E5 plant in Gumi, North Gyeongsang Province. The first batch of the production will be shipped to LG Electronics and some Chinese handset makers, while the production for iPhone is expected to start from as early as 2019 when its new plant, called E6, is completed in Paju, Gyeonggi Province."

There was a varient of this rumor that surfaced back in May about Apple preparing a foldable smartphone with LG. Lastly our cover graphic shows an Apple patent figure of a foldable iPhone from their granted patent for such a device issued in November 2016.

Are the rumors based on supply chain noise, pure speculation or simply a set up to make Samsung look like they're going to beat Apple to market?

While I'd love nothing more than to see something different from Apple like this folding smartphone, I think we should be a little cautious about getting to ahead of the game with this rumor. Apple under Tim Cook likes to play it safe. If Samsung hits a home run with their new Note foldable smartphone likely to debut next year, then Apple will race like hell to enter this category. Until then, they'll be happy to see the rumor that makes them look innovative without actually having to do anything.

Apple's CEO told the UK Independent yesterday that "We don't give a rat's about being first, we want to be the best, and give people a great experience." That's code for we don't take chances on major new products anymore.