In 2016 Patently Apple posted a report titled "Samsung Dodged a Bullet this week, but for How Long?" The report pointed to Apple's CEO alluding to have seen an iPhone using Apple Pencil. In an interview with India's NDTV in 2016, Apple's CEO stated that "If you've ever seen what can be created with that pencil on an iPad or an iPhone, it's really unbelievable." While Apple has yet to launch an iPhone with an Apple Pencil, speculation, rumor and a series of recent patents (one & two) indicate that Apple is continually working on such a feature for a future iPhone.

In fact another Apple patent surfaced yesterday titled "Mitigating Active Stylus/Touch Cross-Coupling," that stated "FIG. 1 shows an example of a touch screen device, such as a smartphone or tablet, as described in more detail herein. The touch screen device may include one or more touch sensors, including a plurality of sense rows and columns for sensing touch contacts and/or stylus contacts." 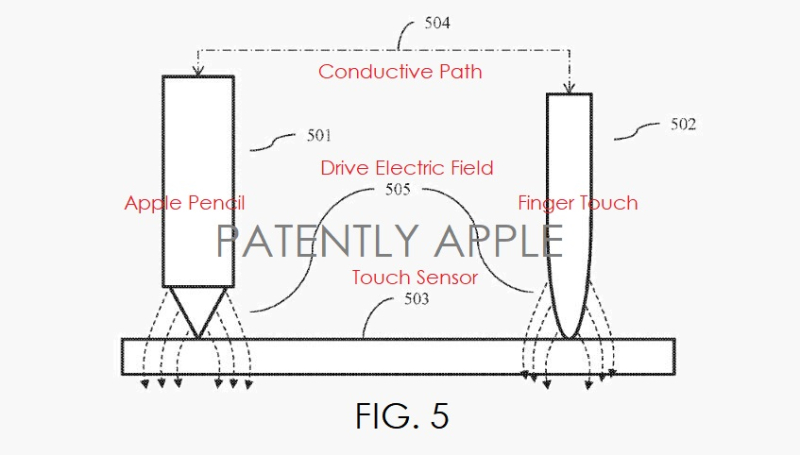 In Apple's patent FIG. 5 above we're able to see an exemplary cross-coupling path between a drive-type active stylus and a finger placed on a touch sensor. This is in context with an iPad or iPhone.

Today The Korea Herald reports that "sources say Apple engineers have recently been working on a new iPhone that comes with a digital pen."

The sources further noted that "Apple is preparing to launch the phone as early as 2019. It is also in talks with a couple of stylus makers for a partnership."

The sources even knew the type of technology that Apple was likely to adopt. The sources added that "While the [Samsung] Note pen is based on electro-magnetic resonance technology that requires additional panels under the screen, the iPhone stylus is likely to adopt a supercapacitor stylus type for price benefits. A supercapacitor type is cheaper to make compared to the EMR stylus. It also offers a more pen-like feel."

Lastly, the report pointed out that "Along with the stylus technology, the source said, Apple's current A-series mobile chip should undergo a drastic upgrade to better support handwriting functions of the planned stylus."